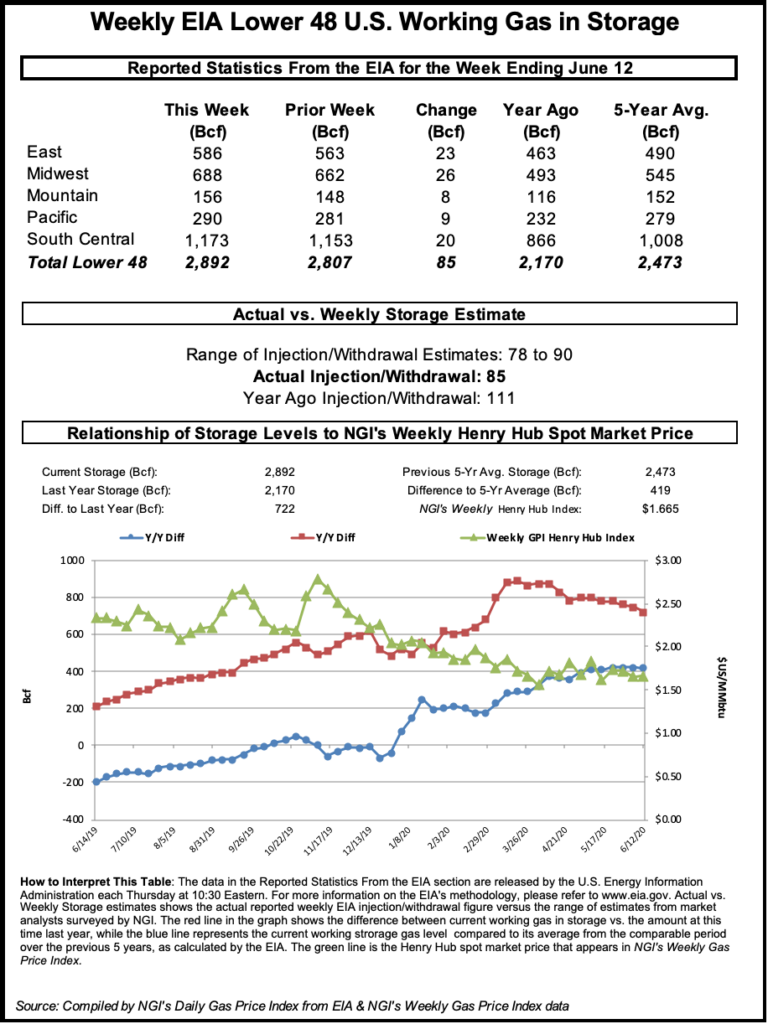 The U.S. Energy Information Administration (EIA) reported an injection of 85 Bcf storage for the week ending June 12. The print was in line with the averages of major polls. It was notably lower than the 111 Bcf build during the same week a year earlier, and it was below the five-year average build of 87 Bcf for the period.

The latest injection lifted inventories to 2,892 Bcf, compared with the year-earlier level of 2,170 Bcf and the five-year average of 2,473 Bcf, according to EIA.

The storage report pointed to a tightening of supply and demand as state governments ease coronavirus-induced restrictions and businesses reopen, gradually fueling more energy demand amid a brief run of seasonal weather strength in the East.

“The bullishness of the build was driven almost entirely by the hot eastern region,” where there was a 23 Bcf build versus the five-year average of 29 Bcf, said one participant on The Desk’s online energy platform Enelyst.

Uncertainty, however, still looms large on multiple fronts. Near-term weather forecasts call for cooler temperatures and rain across swaths of the country before more intense summer heat settles in. Weather forecasts called for a “stalled weather system over the East into the weekend, followed by additional systems sweeping across the Midwest and east-central U.S. next week,” keeping temperatures in check, NatGasWeather said.

“We continue to look to June 28-July 2 for more intimidating heat to finally arrive…with upper high pressure over Texas and the Southwest expanding north and eastward to gain territory. We expect this will be an important period, and it’s up to a hotter pattern coming through or it could lead to further disappointment, especially when considering surpluses in supplies.”

Given current conditions, the firm added, it expects the next EIA storage print to exceed 100 Bcf, well above the five-year average for the week of 73 Bcf.

At the same time, industrial power demand remains modest while economic activity slowly climbs out of the depths of the recession, which has been amplified by Covid-19. As this develops, public health officials are cautioning about spiking cases of the virus in states that have tried to re-open with relative haste, including Arizona, Florida and Texas. Overall, cases have risen this month in 20 states, according to research by Johns Hopkins University, and the disease this month is killing about 800 Americans a day.

“The recent spike in Covid-19 cases in several states presents an obvious risk for economic activity,” Jefferies analysts said. “The likelihood of new lockdowns remains extremely low, but a new wave of infections could certainly alter consumer behavior and reduce spending.” Mobility data in states with rapid growth in cases found a “loss of momentum” that suggests “the public remains sensitive to pandemic developments and will retrench if the spikes become more widespread.”

Ongoing spread of the virus continues to curb economic activity internationally as well, including across Europe and Asia, both of which were vital destinations for U.S. exports of liquefied natural gas (LNG) prior to the pandemic. Export demand remains soft; the outlook is clouded by both uncertainty about the pandemic’s duration and its potential for abiding impacts on economies across the globe.

With a mixed weather outlook, spot gas prices across the Lower 48 were uneven, with gains and losses mostly modest.

NatGasWeather said the weather system that stalled over the East this week should move out by the weekend but still leave comfortable highs in the 60s to lower 80s. Meanwhile, a separate cooler system is impacting the Rockies, producing highs of only 50s to 70s.

Between the two systems, however, heat is penetrating other regions, with highs in the 90s across Texas and the Plains, and temperatures soaring into the 100s in the Southwest, generating regionally strong cooling demand, the firm said.

National demand is expected to briefly increase to start next week, NatGasWeather added, as highs over the East warm into the 80s and lower 90s. “However, fresh weather systems will already be arriving upstream over the Midwest with additional rounds of showers and comfortable highs of 60s to lower 80s.” The systems are expected to track into the east-central United States next week and “keep national demand at not quite strong enough levels.”

NatGasWeather is looking for more consistent heat at the tail end of June and into early July.

Cash prices were strongest in West Texas, where El Paso Permian rose 3.5 cents day/day to average $1.305, and in the Northeast, where Algonquin Citygate gained 8.0 cents $1.590.