Following a stretch of heavy selling going back to last week, natural gas futures rebounded in early trading Wednesday as weather models advertised a notably colder outlook for the second half of December.

Both the American and European weather models underwent sizable colder trends overnight, adding around 15-20 heating degree days to the outlook, according to NatGasWeather.

“It’s no surprise the weather data trended colder after five straight days of warmer trends,” the firm said. Still, the extent of the colder shift may have been “more than the natural gas markets were expecting.

“Most important, the overnight data trended colder for Dec. 15-21 by favoring frosty air over Western Canada and the U.S. Northern Plains advancing more aggressively south and eastward, thereby covering most of the U.S. with below normal temperatures,” NatGasWeather added.

Still, it’s questionable whether the advertised cold will persuade traders since models had previously teased more frigid conditions for the first half of December that failed to materialize, according to the firm.

“Below to much below normal temperatures favor the Northwest to Central,” the forecaster said. “Belows are also at times in the Mid-Atlantic and Southeast, while near normal readings are forecast in the Northeast. Confidence remains low on recent model performances.”

In terms of balances, the impact of milder weather for the first half of December will be “significant,” putting Lower 48 storage on track to flip from a deficit to a surplus versus the five-year average, NatGasWeather said.

“It’s no surprise natural gas prices are higher overnight on colder trends that served as a catalyst for a technically oversold bounce,” the firm said. “The primary focus today is on how far bulls can extend the overnight bounce and whether they can make a run for $6 if the midday data were to hold colder overnight trends.” 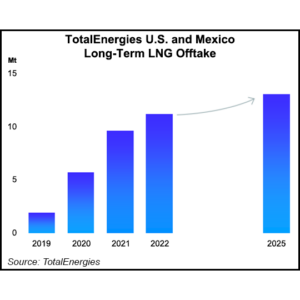 French supermajor TotalEnergies SE indicated Wednesday it would double-down on its LNG business, which CEO Patrick Pouyanné said would be a “pillar” of the company’s growth in the years ahead, along with its power generation operations. The two businesses, which have operated within the same segment for years, have been so instrumental to the company’s…