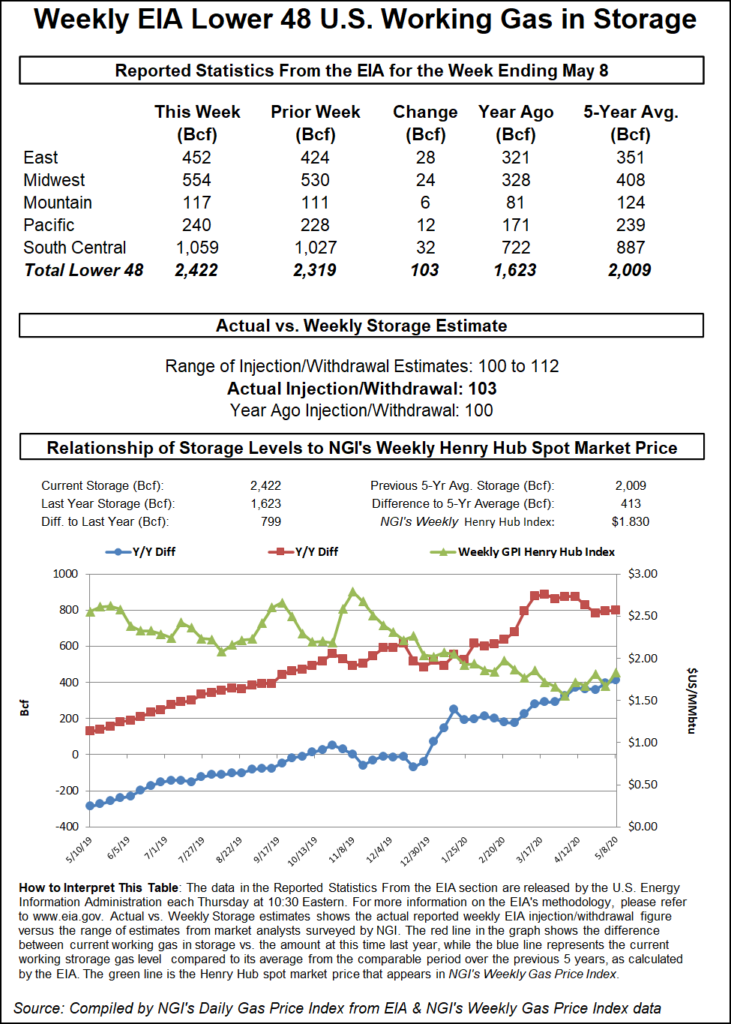 Spot gas prices remained in the red across most of the country, sending NGI’s Spot Gas National Avg. down 6.5 cents to $1.415.

Regarding Thursday’s recovery in futures, Bespoke Weather Services said from a technical perspective, prices had jumped off the $1.50-1.60 level each time it was reached. “But without material tightening, any rally likely gets sold into.”

The firm said low weather-related demand is likely to persist the next couple of weeks as any remnants of winter quickly dissipate and extreme heat remains at bay. Toward the end of the month, warmth could return to the West as global atmospheric signals indicate the pattern is not yet moving into La Niña mode, “although we still expect that transition to occur as we move through the summer season, which is part of the reasoning for expecting another hotter summer this year for the nation as a whole.”

However, liquefied natural gas (LNG) demand also remains underwater. NGI’s latest figures point to another drop in feed gas deliveries to U.S. terminals, down to around 5.35 million Dth on Thursday from about 7.0 million Dth on May 9.

Meanwhile, further reductions at Cheniere’s Corpus Christi export facility, where flows have fallen by roughly 0.5 Bcf/d month/month, have more than offset rising feed gas deliveries to the Freeport and Cameron terminals, both of which are in the process of ramping production on their third trains.

Meanwhile, a compressor fire at the Elba Island LNG facility forced three production units offline, according to project sponsor Kinder Morgan Inc. Feed gas deliveries to the Georgia terminal were at only 81 Dth on Thursday, off from nearly 25,000 Dth on Tuesday, NGI data show.

With soft global gas demand seen persisting in the wake of the Covid-19 pandemic and a span of mild weather occurring in the United States over the coming weeks, already stout storage inventories are sure to swell even further and should limit any rally in futures prices.

Nevertheless, the Energy Information Administration’s (EIA) reported 103 Bcf injection into storage inventories for the week ending May 8 came in slightly below consensus and provided some further uplift to prices.

After opening Thursday’s session at $1.643, the June Nymex contract reached an intraday high of $1.715 before settling near the middle of the 10.5-cent trading range.

Bespoke, which had projected a 105 Bcf injection, viewed the EIA report as “pretty neutral” given market expectations but said the figure once again confirms “very loose” supply/demand balances. The firm continues to search for “meaningful tightening that would finally give some support to the front of the curve in terms of allowing a sustainable rally.”

NatGasWeather analyst Andrea Patrinieri said an EIA figure in the 90 Bcf range would have been a better signal of tightening, especially considering the recent decline in production. “No good in my opinion, especially for week 2 and 3 now.”

Indeed, early estimates showed injections for the next EIA report falling well short of the century mark thanks to the late-season cold blast that hit the Midwest and East last week. However, beyond next week, 100 Bcf-plus injections were likely to resume, setting the stage for storage to fill potentially by October.

“Any number around 110 this week would be beyond terrible going forward…pointing to 4.7-4.8 Tcf end-of-season storage inventory, without serious production reductions,” Patrinieri said.

The 103 Bcf build compares with last year’s 100 Bcf build and the five-year average build of 85 Bcf, according to EIA.

Broken down by region, the South Central region continued to lead with a 32 Bcf injection, which included a 24 Bcf build into nonsalt facilities and a 9 Bcf build in salts, EIA said. The East added 28 Bcf to stocks, and the Midwest added 24 Bcf. Pacific inventories rose by 12 Bcf, while Mountain stocks climbed 6 Bcf, according to EIA.

With temperatures growing milder by the day, spot gas prices on the East Coast were once again hard hit on Thursday, with once premium-priced markets barely hanging onto $1 handles.

Other markets within the Northeast posted similarly sharp decreases, as did those farther upstream in Appalachia. Texas Eastern M-3, Delivery next-day gas was down 25.5 cents to $1.000.

Far more muted moves were seen in other markets. Southeast prices shifted only a few pennies day/day, as did those throughout Louisiana and the Midcontinent. In the Midwest, Consumers Energy cash fell 8.5 cents to $1.525.

Losses across the West were fairly small, capped at less than a dime as a series of weather systems were forecast to track onshore over the next week for relatively mild high temperatures in the 50s to 70s. PG&E Citygate next-day gas slipped 5.5 cents to $2.445.