Natural gas futures forged higher on Friday as production dropped amid blasts of late-winter cold, marking a second consecutive day of gains but not enough to offset losses earlier in the week. The April Nymex gas futures contract gained 9.4 cents day/day and settled at $4.725/MMBtu. May rose 9.7 cents to $4.766. 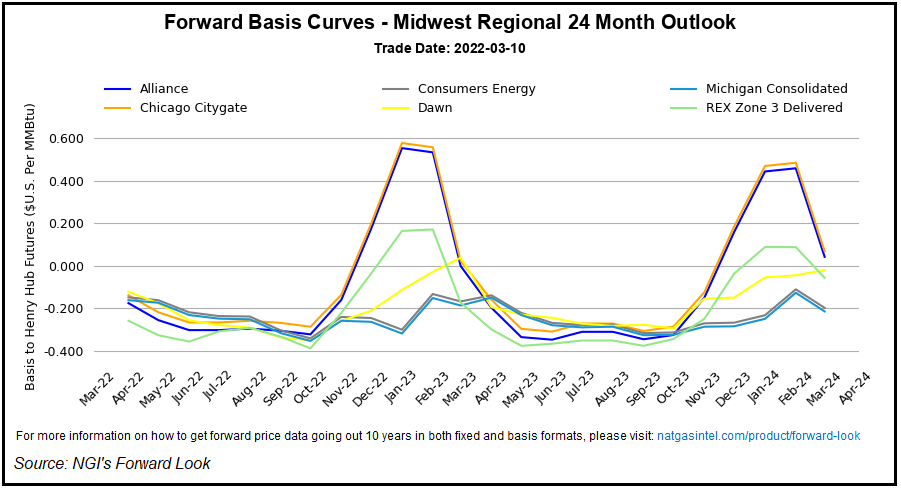 The prompt month had gained 10.5 cents Thursday but finished the week down 6% after forecasts for warm weather later in March fueled losses to start the week.

Production dipped below 92 Bcf, according to Bloomberg’s Friday estimate, down from around 93 Bcf much of the week – and down from near 95 Bcf the previous week. A rash of freezing air in the Rocky Mountains, Midcontinent and into Texas forced freeze-offs that cut into output just as near-term heating demand escalated ahead of the weekend.

Forecast data “held strong national demand through the weekend as a frosty weather system with rain, snow and chilly temperatures sweeps across the interior U.S. and into the East,” NatGasWeather said Friday.

The latest decrease lowered inventories to 1,519 Bcf, leaving stocks well below the five-year average of 1,809 Bcf.

Analysts at Tudor, Pickering, Holt & Co. (TPH) viewed the market as undersupplied during the EIA report week, estimating a 3.4 Bcf/d weather-adjusted shortfall, versus an undersupply of 0.4 Bcf/d in the prior week.

TPH noted modest supply this week as well, as output from both the Midcontinent and the Permian Basin “trended lower through the week.”

With the war in Ukraine entrenched – and the reliability of Russian gas flows to Europe in question – the LNG demand trend is expected to endure. Europe counts on Russia for a third or more of its natural gas. Flows from Russia had held up through the 16th day of the Kremlin’s invasion of Ukraine on Friday. But the European Commission set a target to slash Russian gas imports by two-thirds before the close of 2022.

Meanwhile, western pressure against Russia continued to mount Friday. After banning imports of Russian oil and gas earlier in the week, President Biden called on Congress to end the U.S. policy of treating Russia “as a most-favored nation.” Without that World Trade Organization designation, more Russian imports would be subject to higher tariff rates. Biden also banned imports of Russian seafood, vodka and diamonds as the United States and Western allies continued to ramp up sanctions against the Kremlin for launching an unprovoked war.

“The United States and our allies and partners continue to work in lockstep to ramp up the economic pressures” and “further isolate Russia on the global stage,” Biden said.

For all the late week momentum, however, EBW Analytics Group senior analyst Eli Rubin noted that the domestic weather picture is expected to shift dramatically in the week ahead.

While heating demand was projected to prove robust through the weekend, it could soon plunge with rising temperatures. Daily physical demand for gas could fall by 30 Bcf/d over the next trading week, he said.

Additionally, the production freeze-offs that supported prices Friday were expected to peak over the weekend and then bounce 2.0-2.5 Bcf/d over the following week, Rubin said.

“If warm forecasts for late March hold, the combination of sinking demand, rising supply and a rapidly loosening physical market may drive natural gas lower over the next 7-10 days,” he said Friday.

Spot gas prices popped on Friday as freezing conditions permeated the Midwest and forecasts called for the chills to spread East.

Demand for gas to heat homes was expected to prove strong into the weekend, with negative temperatures forecast Friday night in the Northern Plains and lows in the teens over swaths of the Midwest and Great Lakes.

Over the weekend, lows in the 20s were anticipated across the Northeast, and prices in the region led the upward march on Friday. Algonquin Citygate surged $3.020 day/day to average $7.610.

NatGasWeather, however, said “a rapid warm-up” would dominate the weather picture in the week ahead, with “widespread highs of 60s to 80s across the southern U.S. and 40s to 60s over the northern U.S. for very light” heating needs.

“This will result in the lightest national demand since last November,” the firm said, adding that it anticipates net injections into gas storage could begin during the week.

What’s more, NatGasWeather said forecasts Friday pointed to above-average temperatures lingering into the last week of March. It projected weak national demand late in the month “as high pressure strengthens and expands” over most of the Lower 48.