A U.S. Department of Energy (DOE) proposal could increase energy-efficiency requirements for the average natural gas furnace in American homes, and it has spurred questions about consumer choice and affordability. 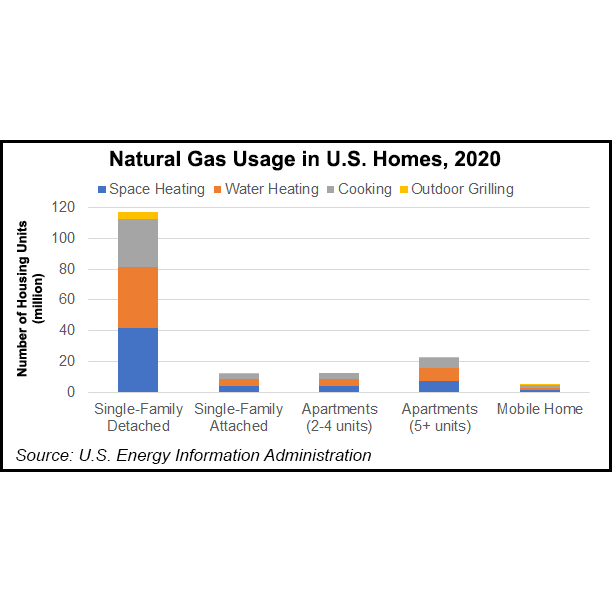 “By updating energy standards for many carbon-emitting appliances, such as home furnaces, the Biden Administration is working to save consumers money,” DOE Secretary Jennifer Granholm said.

The proposed rule would require nonweatherized gas furnaces and those used in mobile homes to achieve an annual fuel utilization efficiency of 95%.

In other words, compliant furnaces would produce 95 Btu of heating for every 100 Btu of natural gas consumed, “taking almost all of the gas used by the furnaces and turning it into heat provided to the living space,” said the agency.

Modern condensing furnaces that use a secondary heat exchanger to capture excess heat from exhaust gases make the 95% efficiency criterion “achievable in every American home,” according to federal officials.

Condensing furnaces for residential heating have been mandatory in Canada for more than 10 years.

Gas furnaces account for 15% of annual residential energy use and, in 2020, represented about 3.4% of all U.S. domestic energy use, DOE noted.

The agency’s announcement comes as U.S. utilities are passing higher gas supply costs on to customers.

Installing a compliant gas furnace would save a consumer $60/year on their utility bills, said DOE. It did not provide estimated average furnace replacement costs.

Over a 30-year span, the mandate would cut carbon emissions by 373 million metric tons and methane emissions by 5.1 million tons. DOE said that equated to annual emissions from 61 million homes.

“These efficiency measures not only reduce carbon and methane emissions, but also provide huge material benefits to American households in the form of cleaner air, modernized technology, and cheaper energy,” said Granholm.

The proposed rule faces a public comment period. If adopted within DOE’s desired time frame, the rule could take effect in 2029.

The industry trade group, which has advocated a role for natural gas in decarbonization, said that many older homes, particularly in low-income neighborhoods, “cannot accommodate expensive venting requirements for a condensing furnace. These customers would be forced to switch to an electric furnace.”

CEO Karen Harbert noted that replacing an existing gas furnace on the market today with a 95% efficiency unit is no simple task.

“They are not the same piece of equipment and we have explained this to the Department of Energy many times,” she said. “The natural gas industry is working every day on implementing solutions to achieve our cleaner energy goals, and without question there is a better and more inclusive way to make appliances more efficient.”

AGA plans to “thoroughly examine every aspect of this proposed rule.”

If the proposal “is another attempt to put the natural gas industry out of business, we will vigorously object,” Harbert said. “At this time when natural gas is imperative for our country’s and the world’s stability, placing enormous costs on everyday Americans is wrong-headed at best.”

“ACCA continues to take the stance that consumers should have the right to choose what equipment is installed in their homes,” CEO Barton James told NGI.

He said consumers, particularly in lower-income tax brackets, “often do not have the luxury of worrying about operating costs over an extended period of time. Rather their primary concern is whether they can afford the new appliance at all.”

Moreover,customers who install higher-efficiency gas furnaces, depending on their location, “may not see much of a payback” in their energy bills.

“HVAC manufacturers are producing highly efficient products, meeting and exceeding DOE’s regulatory demands,” he said. “However, as long as DOE does not require minimum installation and design standards manufacturers recommend, pushing another efficiency regulation will once again miss the desired mark and negatively impact consumers.”