Natural gas prices for October fell an average 12 cents from Sept. 1 to 6 as a trifecta of factors created the only logical path for forward markets during the short holiday week, according to NGI’s Forward Look. NGI was closed Sept. 4 in observance of Labor Day. 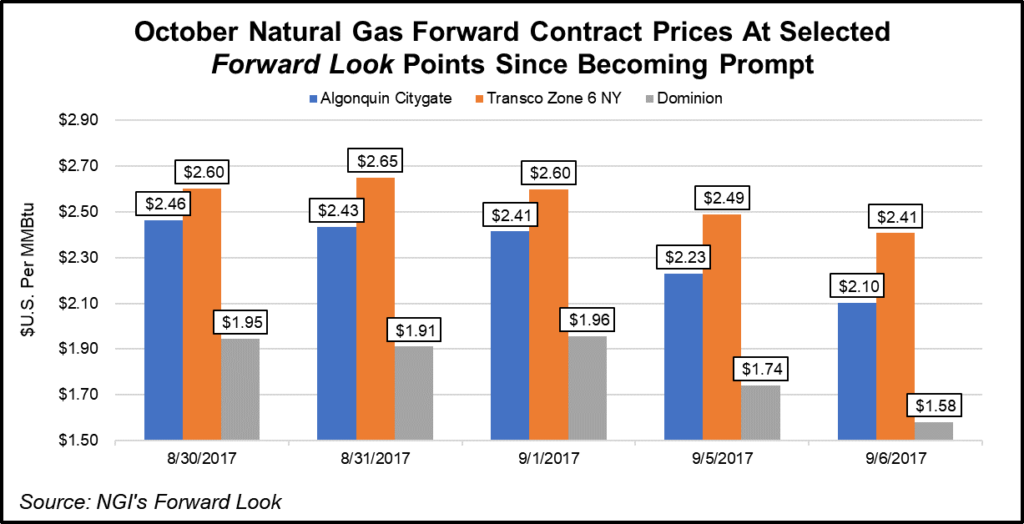 Losses on a national level were pushed lower due to a substantially weaker prices across the Northeast, where an unseasonably strong cool front that swept across the central, southern, and eastern United States earlier in the week has left cooler-than-normal temperatures in its wake, with highs expected to reach the 60s and 70s through the weekend.

Some Northeast points saw losses of around 40 cents at the front of the curve, with double-digit declines extending into the premium winter strip. For comparison, the Nymex Henry Hub October futures contract fell just 8 cents from Sept. 1 to 6 to reach $3.00, while November dropped 7 cents to $3.07 and the prompt winter shed 5 cents to land at $3.24. The rest of the curve was down a couple of pennies at best.

“This is weather more than anything. No one had their A/C on in NYC today,” said NGI’s Patrick Rau, director of strategy and commodity research. “This is the last remnants of cooling demand, and we aren’t really seeing it. Meanwhile, production isn’t really slowing down. That gas has gotta go somewhere, such as the ground.”

Indeed, weather guidance overnight eliminated many of the warmer risks that were seen in the medium term, as cold looks to hold on slightly longer across the Southeast than previously expected and another cold shot later in September seems possible as well, forecasters with Bespoke Weather Services said Thursday.

In fact, the last week of September currently sees heating degree days overtaking cooling degree days, but Bespoke’s Jacob Meisel, chief weather analyst, said any cold risks are technically bearish at this point as the mild weather will result in larger storage injections during the next few weeks.

Meanwhile, Hurricane Irma continued to barrel through the Caribbean, and all eyes were on Florida. In its 5 p.m. EDT update Friday, the National Hurricane Center said Irma’s probable path would take it into southern Florida early Sunday and on a track through central Florida and on into Georgia early next week. Irma was about 345 miles southeast of Miami Friday afternoon, moving west at 12 mph. Maximum sustained winds were near 155 mph, making Irma a Category 4 hurricane. It was previously a Category 5 hurricane with winds of 185 mph.

“Any direct landfall in Florida would have more dramatic bearish impacts, with far more widespread power outages and demand loss than should the storm stay offshore and gradually weaken before landfall in South Carolina,” Meisel said.

All this sets the stage for demand destruction in areas in its path.

Given the lower demand on the horizon, both from Irma and cooler weather in other parts of the country, NatGasWeather is projecting the storage injection for the week ending Sept. 7 to come in between 67 and 78 Bcf, up from the five-year average of 63 Bcf. The following week, for the week ending Sept. 14, is expected to see an injection of 64 to 77 Bcf, compared with the five-year average of 73 Bcf.

The U.S. Energy Information Administration on Thursday reported a 65 Bcf injection into inventories for the week ending Sept. 1. This was just 1 Bcf above market consensus, but far above the year-ago 38 Bcf injection and the five-year average of 58 Bcf. Inventories now stand at 3,220 Bcf and are 212 Bcf less than last year and 15 Bcf greater than the five-year average.

The growth in stockpiles this week is a welcome sigh of relief for market bears. Just last week, futures and forward prices surged as the the apparent tightness in supplies suddenly hit the market. NatGasWeather cautioned that even though the next two storage reports would likely be above historical levels, a resumption in surplus declines is expected during the second half of September as warmer temperatures arrive over the southern half of the country, timing the flipping of surpluses to deficits late in the month.

Bespoke’s Meisel added that if cooler weather wins out, the risk of elevated heating demand into October “will not necessarily be that negative for future prices regardless.”

“Risk of colder weather heading into October could stoke further fears about market tightness and limited stockpiles headed into withdrawal season, which seemed to spike prices last week,” he said.

Taking a more granular look into the markets, Northeast points shed some serious weight this week on the mild weather in the region. Even Appalachian points were not immune despite the long-awaited Rover Pipeline flowing out of Ohio this week.

The dramatic declines are in stark contrast to cash markets, which got some uplift after Energy Transfer Partners LP’s Rover Pipeline ramped up over the holiday weekend and flowed just above 600 MMcf/d out of eastern Ohio Wednesday.

After receiving its in-service authorization from FERC last week, Rover began flowing last Sept. 1, delivering 258 MMcf/d from the Ohio River System (ORS) in Cadiz, OH, to interconnects with Panhandle Eastern and ANR in northwest Ohio, according to data from PointLogic Energy. As of Wednesday, Rover had ramped up to more than 600 MMcf/d, delivering volumes received from the Ohio River System and from MarkWest’s Cadiz processing plant to ANR and Panhandle, PointLogic data show.

The highly anticipated $4.2 billion Rover, designed to transport Marcellus and Utica shale gas to markets in the Midwest, Gulf Coast and Canada, was scheduled to begin service earlier this year but has been delayed following multiple hang-ups with FERC and state regulators. Energy Transfer management said during a 2Q2017 conference call that it would take about 40 days to complete HDD work for Phase 1B once FERC lifts the moratorium. Rover’s Phase 2, which would bring the project up to its full 3.25 Bcf/d designed capacity, is projected to come online by early December.

The Northeast declines come as production in the region continues to grow, with no signs of slowing. Production soared above 25 Bcf/d during the holiday weekend, making it the first time in history the Northeast has produced over 25 Bcf/d.

Across the border in western Canada, AECO forward prices also posted more significant declines than Nymex futures as weak demand and pipeline maintenance in the region weighed heavily on the prompt month.

TransCanada’s NGTL pipeline implemented capacity cuts at the Empress/McNeill borders beginning on Sept. 6, and they are now expected to continue through October 5, nearly a week later than earlier expected.