Even as the natural gas market was on the brink of yet another polar front that began on Friday, natural gas forward prices plunged in striking fashion between Jan. 17 and 23 as warmer risks for the first part of February showed up in earlier weather models. 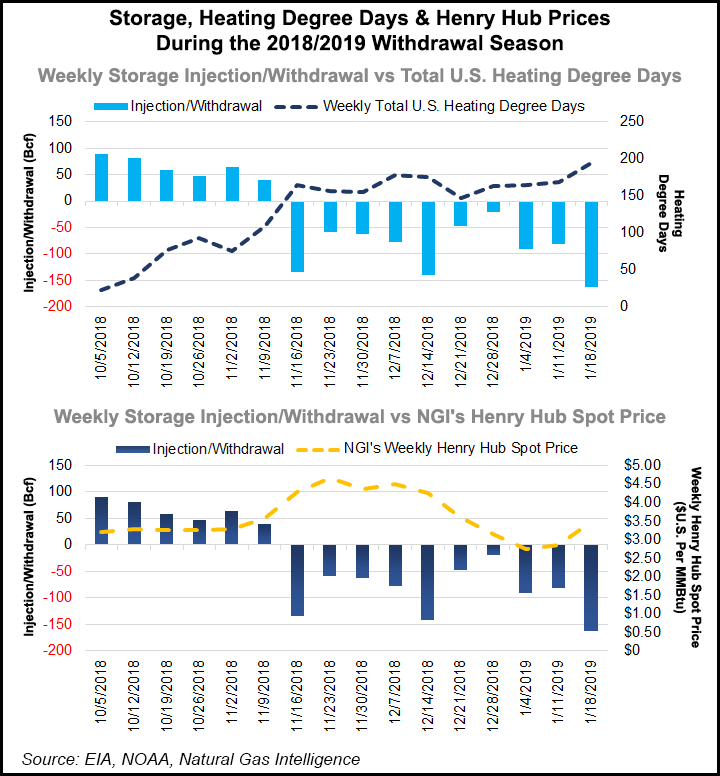 Although the latest weather data turned more frigid for the first part of next month, the damage to natural gas prices was already done as a massive sell-off at the front of the curve sent the Nymex February gas futures contract below $3. The prompt month plunged 43 cents between Jan. 17 and 23 to $2.98, before a rebound on Thursday. March fell a quarter to $2.922.

As for the latest weather outlooks, weather model guidance overnight Thursday was decently warmer as models appeared to back off the intensity of the short-term cold shot expected to close out January. This also keeps cold less entrenched for any ensuing warm-up, allowing gas-weighted degree days (GWDD) to more easily move back to average, according to Bespoke Weather Services.

Models, however, remained consistent in a returning negative Eastern Pacific Oscillation ridge in the 13- to 15-Day time period that should help return more significant cold across the country into the middle of February, the firm said.

“Though the trends overnight were thus bearish, we see risks for more GWDD additions moving forward given a favorable long-range pattern for significant cold shots, and this still fits tropical forcing propagation expectations and Nino climatology. Thus, we do not see overnight trends as overly bearish, even though we lost a decent chunk of GWDDs, and on net, GWDDs easily run above average from here,” Bespoke chief meteorologist Jacob Meisel said.

Earlier in the week, weather guidance had indicated that polar air would retreat into southern Canada during the first week of February, which led to the steep slide in gas prices.

Mobius Risk Group cautioned that the dramatic sell-off at the start of the week would likely not continue for long as cold once again began blanketing the eastern half of the country by Friday. Analysts were puzzled at the early-week action since the warmer trends were showing up in data that lacked agreement from other more reliable weather models and due to “the massive cold air mass setting up in Western Canada at the end of the run.”

Looking ahead, the next several Energy Information Administration (EIA) storage reports suggest bears will have to face an aggressive counter attack by bulls, according to Mobius. “Although early, it appears the current week (to be reflected in the Jan. 31 EIA report) may post a 200 Bcf-plus withdrawal and the subsequent week should seen even greater demand as heating degree days are forecast to be 30 greater week/week.”

On Thursday, the EIA reported a slightly larger-than-expected 163 Bcf withdrawal from storage inventories for the week ending Jan. 18. That withdrawal fell on the bullish side of major surveys but was bearish versus the five-year average 185 Bcf pull and the 273 Bcf withdrawal EIA recorded in the year-ago period.

The reported build was just 1 Bcf away from Bespoke’s estimate, and the firm said that although the market did not initially appear particularly impressed with this number, “with cold weather only confined to the East on the week and a large draw both in the Midwest and in the South Central, we see this print as indicating significant upside risk on any return of colder weather into the middle of February.”

With a colder February, Bespoke’s end-of-season expectations have dipped below 1.2 Tcf and can fall further if forecasts cool more than expected. “We of course need cold risks on model guidance to rally, but we expect those to build over the coming week and support prices,” Meisel said.

Once again, the salt draw surprised some market observers as the injections that have occurred in the last four weeks have now reversed. “Seems the refill and empty cycle of the most active salt facilities is going to get figured out,” Wood Mackenzie natural gas analyst Gabriel Harris said on Enelyst, a social media platform hosted by The Desk.

Mobius looked for salt withdrawals to also factor into the coming week’s EIA report as the steep sell-off at the top of the week left the Nymex February contract at a discount to Henry Hub spot prices.

Production freeze-offs were also expected to influence the storage data, even though market observers on Enelyst noted that this withdrawal season has been the weakest in the last six seasons. “Withdrawals have averaged 4-5 Bcf/d lower than last year on similar degree days. So that is the big reason prices have declined even with the cold end to January,” Harris said.

With a far milder end of December and early January, the natural gas market has a much larger buffer in storage, according to Bespoke. But with cold on tap for the end of the month and early February, that buffer erodes.

“It isn’t in itself a reason to worry yet if the market is banking on warmth returning later Week 2 into Week 3. Sustain cold through February, and that’s a totally different story. The market better hope it’s right that this cold isn’t sustained,” Meisel said.

The impressive rally that Northeast gas forward markets had achieved during the last two weeks came to an abrupt halt during the Jan. 17-23 period as traders appeared confident in the warmer outlooks for February and in the much-improved storage picture.

While most markets saw declines of well under $1, Northeast pricing hubs plunged as much as nearly $2 at the front of the forward curve. Transco Zone 6 Non-NY February dropped $1.89 to $5.675, and March slid 37 cents to $3.29, according to Forward Look. The rest of the curve slipped less than a dime.

In Appalachia, Dominion South February fell 52 cents from Jan. 17-23 to reach $2.656, and March dropped 31 cents to $2.611. Prices across the rest of the curve slid a nickel or less. Elsewhere in the region, Tetco M-2, 30 Receipt forward prices remained relatively immune to the volatility occurring in the cash market following Monday’s explosion on the Texas Eastern Transmission Co. (Tetco) system.

Tetco has three lines between its Berne and Athens, OH, compressors that make up its 30-inch system in this area: Line 10, Line 15 and Line 25. The pipeline restricted north-to-south capacity through the Berne compressor station to net zero through the station by isolating Lines 15 and 25 in order to investigate the incident.

Tetco is working to return Line 25 to service as soon as safely possible. A initial notice speculated that partial service might be available by Thursday evening, however, that was not evident as of the Intraday 9 p.m. cycle, according to Genscape Inc.

A second pipeline notice indicated that roughly 1 Bcf/d could be returned to service through the Berne compressor station between Jan. 28 and 30.

“We have seen reported flow revisions indicating 130 MMcf/d of southbound flows on the Berne 30-inch compressor for Jan. 23 despite the notice indicating net zero flows, and a northbound flow reversal as of Jan. 25’s early cycles, which could be revised,” Genscape natural gas analyst Josh Garcia said.

Pipeline operator Enbridge Inc. continues to issue statements regarding the incident. As of Thursday, the company had successfully isolated the other two natural gas pipelines in the right-of-way to continue the integrity investigation prior to returning them to service. It also conducted an onsite investigation and evidence collection in coordination with the Public Utilities Commission of Ohio, the U.S. Pipeline and Hazardous Materials Safety Administration and a third-party expert. It also continued to sample air, water and soil, and continued to mobilize resources and prepare the site for construction.

While there was still no estimated timeline to return the pipeline to service, Texas Eastern M-2, 30 Receipt February prices fell 56 cents to $2.605, and March dropped 33 cents to $2.572, Forward Look data show. These moves lower are slightly more pronounced than those in the Nymex, but in line with several other pricing hubs across the country.

AECO in the Black

In an otherwise sea of black, Western Canadian forward prices were a ray of light as demand in the region has increased while provincial production has taken some hits with freeze-offs, according to Genscape Inc.

The bullish backdrop has led to an increase in cash basis pricing this month so far, and the impact is seen in forward pricing as well. NOVA/AECO C February prices edged up 3 cents from Jan. 17-23 to reach $1.395, and March climbed 4 cents to $1.222, according to Forward Look.

The modest strength comes as so far this month, the province is consuming an average 6.31 Bcf/d. This is a record for January and perpetuates a 12-year trend for each January to come in higher than the year prior, according to Genscape.

“This year’s January demand levels are all the more notable in light of the fact temperatures in the province have been averaging about 3 degrees Fahrenheit warmer than normal. On a weather-adjusted basis, demand is averaging more than 0.24 Bcf/d stronger than January 2018’s weather-normalized rate,” senior natural gas analyst Rick Margolin said.

Structural growth in Alberta demand is evident in every month and season of the calendar year due to ongoing growth of the oil sands sector, population growth and fuel switching in the power sector, Genscape said.

Production is also coming in lower. Month-to-date volumes are averaging 12.26 Bcf/d, about 20 MMcf/d below the same time in 2018. Current Alberta production volumes are recovering from earlier-month freeze-offs, though — as anticipated — recovery has been somewhat slow as another cold front moved through the province at the end of last week, the firm said.

“Current production is coming in just under 12.5 Bcf/d, which is about 0.2 Bcf/d below the 30-day average prior to the current round of freeze-offs starting around Jan. 7. Since that time, we estimate 9.14 Bcf of provincial production has been choked back, averaging 0.57 Bcf/d and reaching a single-day high (Jan. 9) as high as 1.02 Bcf/d,” Margolin said.