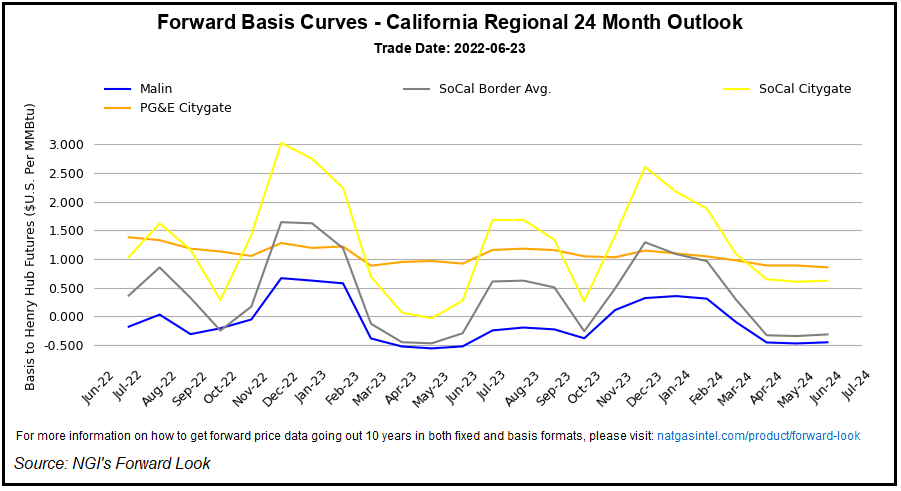 According to NGI’s Forward Look data, benchmark Henry Hub fell 56.2 cents week/week to average $6.859/MMBtu in July fixed price trading, setting the pace for losses of around 40-70 cents at most Lower 48 hubs.

Nymex futures also skidded lower during the period, including a 52.0-cent tumble for the front month ahead of the extended Juneteenth holiday weekend. The July contract saw another major sell-off on Thursday, plummeting 61.9 cents to settle at $6.239 after the weekly Energy Information Administration (EIA) storage report missed well to the high side of consensus expectations.

Prices held their ground in Friday’s session as traders continued to mull the implications of the latest EIA data, with the July contract shedding another 1.9 cents to settle at $6.220.

Questions in the natural gas markets during the June 16-22 period continued to center around the 2 Bcf/d of lost demand from prolonged downtime at the Freeport LNG terminal on the Texas coast, and how this would ultimately alter the U.S. storage trajectory.

A bearish miss in the latest EIA inventory numbers seemed to corroborate the intuition that the absence of such a large chunk of LNG feed gas demand until late 2022 will introduce a significant amount of slack into injection season balances.

EIA reported a 74 Bcf injection into Lower 48 stocks for the week ended June 17 after surveys had indicated a build in the mid to low 60s Bcf. The injection lifted inventories to 2,169 Bcf, still 331 Bcf (13.2%) shy of the five-year average.

“While we are trying to resist reading too much into a single number, if extrapolated forward, it becomes a very tough road ahead for market bulls,” Bespoke said.

“And of course, we have the weather uncertainty as well,” Bespoke said. “With prices down so much, it’s difficult to have a bearish lean for sure.” However, “if this number is confirmed, balance-wise, as we move forward, then we could in fact wind up lower.”

In terms of contextualizing the market’s strong reaction to the EIA report, NatGasWeather observed that it offered “the first opportunity to see how much the Freeport LNG outage impacted supplies,” with that impact seemingly “a little stronger than anticipated.”

As for the temperature outlook, as of midday Thursday the 15-day period served up enough potential heat to be “considered relatively bullish,” with enough cooling demand on tap to keep inventories at a deficit to historical norms, the firm said.

“Summer strip prices had traded a narrow range all week, at least by recent standards, then cratered” following the “strongly bearish” report from EIA, NatGasWeather said. “We mentioned there would be a prolonged battle between bearish LNG exports and bullish weather…However, the natural gas markets have emphatically stated the Freeport outage is considerably more important due to the amount of added supply showing up.”

Meanwhile, keeping tabs on the upstream outlook, the Enverus Drillinginfo Rig Count tallied 821 active U.S. rigs as of Wednesday (June 22), down three from the prior week. The firm said the latest count was up 55% year/year and 1% sequentially.

Among the regional changes, Enverus recorded a five-rig decline in the Permian Basin for the most recent week, with three rigs added in the Williston Basin. The Gulf Coast, including the Eagle Ford Shale, added seven rigs week/week, according to the firm.

“In the last week, the count reached as high as 828 rigs, which is four higher than the prior week’s peak and the highest the count has been since the first days of 2020,” Enverus analysts said. “On June 22, the Gulf Coast hit a new 2022 high at 116 active rigs. There haven’t been this many rigs running in the region since August 2019.”

Rystad Energy analysts Alistair Ramsay and Marina Bozkurt observed in a recent research note that demand for steel pipe in the United States oil and gas sector “shows no signs of easing.”

“Drilling activity is set to keep rising as global oil markets struggle with supply constraints,” the Rystad analysts said. “Oil and gas producers are looking to respond to the supply shortage amid growing demand, however, in some cases operators are having to consider” supply availability for pipe “as they plan their drilling activities.

“Moreover, capital discipline is still key, and with all the cost increases, inflation and supply chain glut, operators are being cautious with their drilling plans.”

Amid the push and pull between hampered export demand out of the Gulf Coast and domestic cooling demand, some regional hubs saw basis differentials strengthen during the June 16-22 trading period.

Over on the West Coast, meanwhile, PG&E Citygate July basis jumped 21.0 cents higher to plus-$1.241. At Malin, prices ended the period 28.6 cents back of Henry, strengthening by 11.8 cents week/week.