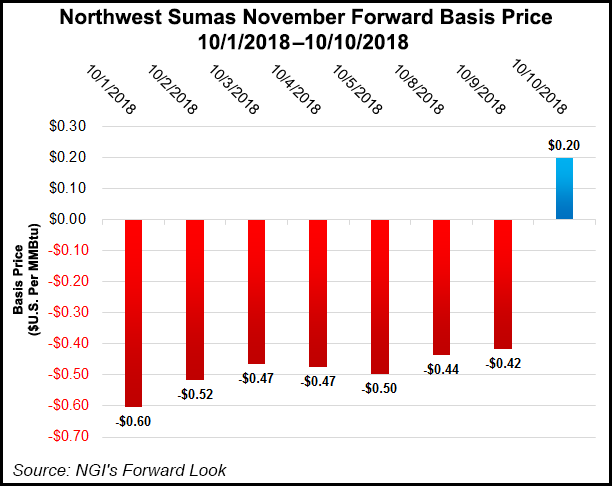 Most days during that time saw prices swing within a few cents, but volatility still was abundant, with wide trading ranges of more than 10 cents on most days. Monday’s action, meanwhile, was especially noteworthy as the Nymex November futures contract was up about 10 cents in the early morning hours as weather forecasts completely flipped during the weekend.

Last week, weather models showed a cold snap that was to hit the western United States and then move east by late this week quickly fading. During the weekend, however, weather models showed several reinforcing cold shots behind the weather system that were expected to keep temperatures well below average for much longer, therefore driving up demand.

Weather models continued to trend colder during the next couple of days, but record production and technical resistance limited any further rally for Nymex futures. On Thursday, the November contract came crashing back down to earth, tumbling some 6.2 cents to settle at $3.222 as milder weather was seen returning later this month. December fell 5.3 cents to $3.279, and January slid 5.2 cents to $3.352.

“Prices are solidly lower today with yet another 10-cent move, likely aided by a little milder trend around Oct. 20, but also likely from the markets seeing prices getting too high too fast as strong resistance was found to be near $3.33-$3.35,” NatGasWeather said.

Meanwhile, the Energy Information Administration (EIA) on Thursday reported a 90 Bcf injection into storage inventories for the week ending Oct. 5. The reported build was in line with market expectations and did little to revive the market that was already trading significantly lower before the EIA’s release. “This fits with our reading of burns loosening off a bit and production continuing to grow with Canadian imports returning last week,” Bespoke said.

Other market observers, however, were perplexed by the sharp downtrend in the market even with the 90 Bcf build. “I’m still dumbfounded by lack of demand talk, all about production still,” said Corey Lefkof, CEO and meteorologist of CLWS.

But Bespoke’s Meisel said the structural growth in power burns appears more impressive than in the residential/commercial sector, which makes the demand story more impressive in summer than in winter, barring extreme winter temperatures.

Thursday’s reported 90 Bcf build lifted inventories to 2,956 Bcf, 627 Bcf below year-ago levels and 607 Bcf below the five-year average. Broken down by region, the Midwest injected 35 Bcf, the East injected 27 Bcf and the South injected 25 Bcf, including 10 Bcf into salt dome facilities and 15 Bcf into non-salt facilities.

Despite the 90 Bcf build, Mobius Risk Group said there is no guarantee there be will be further reductions before withdrawals begin in earnest. “As heating demand moves eastward, daily injection data will be closely followed by the market.”

The latest weather outlooks showed milder conditions around Oct. 19-21, with the midday data reflecting a more pronounced break between cool shots, “but still rather chilly before and after across much of the U.S. besides the West and Plains,” NatGasWeather said.

Stronger-than-normal demand is expected to ramp up late this week as the first weather system in the series sweeps the Great Lakes and northeastern United States the next several days, while also steering tropical system Michael over the Mid-Atlantic Coast and back out to sea, the forecaster said.

A colder reinforcing shot of Canadian air is expected to drop into the Rockies and Plains late this weekend, then into the southern and eastern United States early next week for stronger-than-normal national demand as overnight lows drop into the teens to lower 40s behind the cold front.

Another reinforcing cold shot is expected to follow late next week across the Midwest and Northeast to keep national demand strong, “although then easing the following weekend around Oct. 20 as a milder break between weather systems still looks likely and where the overnight and midday weather models have been milder,” NatGasWeather said.

Much of the data, however, supports additional weather systems/cold shots returning across the north-central and eastern United States Oct. 22-26 for a swing to at least slightly stronger-than-normal demand, the forecaster said. “It’s important to mention, there’s also likely to be cooler air push into North Texas and portions of the South with a few of these systems, such as early next week.” Overall, though, the southern United States is expected to be mostly mild to warm with light demand, NatGasWeather said.

Meanwhile, the market was also grappling with some short-term effects from Hurricane Michael, which made landfall as a Category 4 storm Wednesday on Florida’s Panhandle. On the supply-side, Gulf of Mexico (GOM) operators indicated that restoration activities are underway, according to Genscape. Its Daily Pipe Production Estimate is only showing a modest uptick in GOM output from Tuesday, with Thursday’s volumes estimated at 1,553 MMcf/d, about 69 MMcf/d higher, though subject to revision. Nautilus Pipeline LLC, however, lifted the force majeure that evacuated personnel from the Ship Shoal 207 platform and shut in the Manta Ray Meter B. Previous 30-day average flows onto Nautilus at the Manta Ray Meter B gathering system averaged 204 MMcf/d, Genscape natural gas analysts Josh Garcia and Dominic Eggerman said.

Based on operator reports, the Bureau of Safety and Environmental Enforcement estimated Wednesday that 812 MMcf/d (31.7%) and 718,877 b/d (42.3%) of GOM production had been shut in due to Michael. A total of 89 platforms and three rigs had been evacuated, while four dynamically positioned rigs had been moved off location out of the storm’s path.

On the demand side, there were a reported 860,000 customers without power as of early Thursday, according to the Edison Electric Institute. Aggregate sample demand for Florida, Georgia, Alabama, and Mississippi fell roughly 470 MMcf/d day/day to a 14-day low of 9.38 Bcf/d, after averaging 10.19 Bcf/d over the same time period, Genscape data reflected.

The biggest losses came from Mississippi, where demand fell about 180 MMcf/d day/day to 1.09 Bcf/d after averaging 1.34 Bcf/d over the last two weeks. Most of the losses came from lower power plant demand, Genscape analysts said.

While Nymex futures were on a wild ride this week, Canadian and several U.S. markets downstream also experienced some unexpected volatility after Canadian imports became restricted following an explosion on a critical pipeline out of British Columbia.

Enbridge Inc.’s Westcoast Transmission, near the northern industrial city of Prince George, exploded and caught fire late Tuesday, shutting down the province’s main supply from northern production fields. Downstream utilities in the United States warned of possible disruptions following the explosion despite no damage to their systems.

Both FortisBC and Puget Sound Energy asked customers to conserve natural gas and electricity. Puget Sound indicated it would be switching its electric generation to alternative fuels rather than natural gas.

Late Wednesday, Enbridge received approval to restart an unharmed 30-inch diameter natural gas pipeline that is in the same right-of-way as the 36-inch pipeline that exploded. Repair crews had scrambled Wednesday to fix damage done to the pipeline in the right-of-way for BC’s main natural gas conduit that ruptured and exploded. The mishap shut down both of the Westcoast Transmission system pipes. The unharmed 30-inch diameter line had stopped flowing as a precaution.

With the 30-inch line deemed fit for service, “our restart plan is to gradually bring the line’s pressure up to approximately 80% of normal operating capacity. Once this process is safely completed, some much needed capacity will be restored for our customers,” the National Energy Board said.

Given the higher than normal demand in the western U.S. and the restricted supplies, forward prices skyrocketed during the Oct. 5-10 period. Northwest Sumas November shot up 79 cents to $3.483, while December surged 60 cents to $3.961 and the winter jumped 54 cents to $3.40, according to Forward Look.

In Canada, NOVA/AECO C posted the only decline across North America as November fell a nickel to $1.73, December stayed flat at $1.933 and the winter rose 2 cents to $1.90.

Meanwhile, Hurricane Michael’s impacts were expected to be short lived as forward curves in the affected regions had no reaction to the storm, with prices rising closely in line with the Nymex futures curve. Transco zone 3 November climbed 12 cents from Oct. 5-10 to reach $3.235, December rose 11 cents to $3.285 and the winter edged up 12 cents to $3.24, according to Forward Look.