Pockets of cold weather combined with rising production and near-record liquefied natural gas (LNG) demand to create a mixed bag of gains and losses for natural gas forward prices for the trading period from Nov. 18-23, according to NGI’s Forward Look. 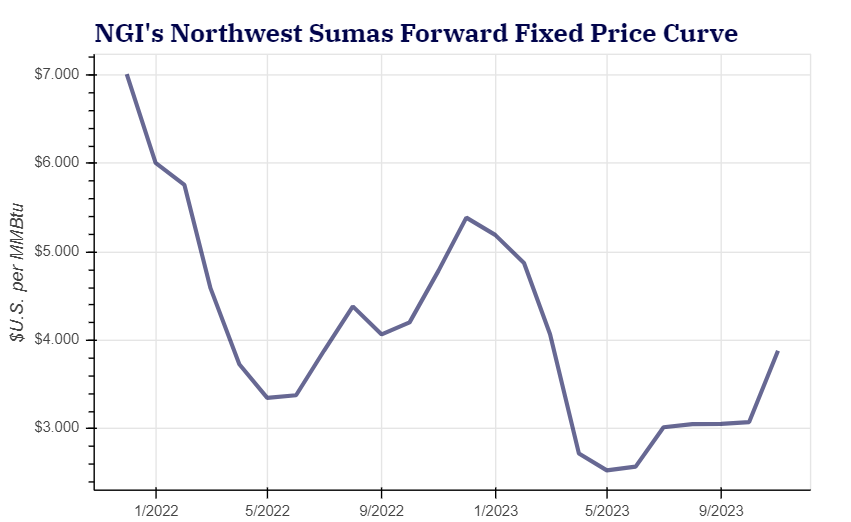 The most significant losses were seen in the Pacific Northwest, where forward prices plunged in response to higher gas imports from Western Canada. Enbridge Inc. on Monday said it returned  the T-South leg of the Westcoast Energy pipeline to normal operations after a brief reduction in flows. Heavy rains, flooding and mudslides prompted the pipeline to reduce flows last week on the T-South leg that transports gas to the Pacific Northwest, sending cash and futures prices alike soaring.

With the pipeline operating back at normal levels, markets responded swiftly with hefty losses. After topping $6.50 the prior week, Northwest Sumas cash prices tumbled back below $5.00 on Monday (Nov. 22).

Malin’s forward curve also reversed course, though losses were far more subdued. Malin December forward prices fell 13.0 cents from Nov. 18-23 to reach $5.833, while the balance of winter dropped a dime to hit $5.465, according to Forward Look. Summer prices averaged 19.0 cents higher for the period at $4.010.

The losses out West compared with a small price increase at the benchmark Henry Hub that set the stage for similar gains at most other U.S. locations.

Though quickly approaching the arrival of more sustained cold temperatures, forecasts so far have come up short in the sweater-weather department. NatGasWeather said the Global Forecast System model shows national heating degree days (HDD) tracking a “massive” 50 HDD below normal for the coming two weeks, or nearly 80 Bcf in lighter-than-normal demand.  The latest midday GFS trended further warmer, shedding 7 HDDs from the outlook. Meanwhile, the European model also trimmed demand from its forecast, instead showing a very warm pattern over much of the United States for the first week of December.

“With prices rising despite bearish weather patterns/trends, this once again shows how bearish data/trends/news gets little to no reaction, while bullish data/news/trends moves prices higher, suggesting a bull market remains in place,” NatGasWeather said.

Meanwhile, production has been on the rise, offering another hurdle to higher prices. Though estimates by analysts have varied by a few Bcf, Bloomberg showed Lower 48 output cresting 97 Bcf on Wednesday.

Nevertheless, bulls remain undeterred as LNG export demand has been on a tear throughout the summer and fall as Asia and Europe clamor for more gas ahead of the peak winter season. Even as Asia has replenished its own storage inventories, local outages at a handful of LNG import facilities have kept demand strong. Europe, meanwhile, needs more LNG to boost its inventories to a more comfortable level before widespread frigid air arrives.

On Wednesday, NGI data showed feed gas deliveries to U.S. terminals sitting at around 11.7 Bcf, with further growth expected as Sabine Pass Train 6 and the Calcasieu Pass terminal ramp up operations. Earlier in the week, Cheniere Energy Inc. reported first production at Train 6, with substantial completion expected in the first quarter of 2022.

EBW Analytics Group said its most-likely scenario calls for LNG feed gas demand to average 12.5 Bcf/d by the back half of December. The projection anticipates elevated demand at Train 6, Freeport firing on all cylinders following unplanned maintenance and help from Calcasieu Pass to pick up slack elsewhere.

Rising export demand, particularly this year, has caused some noteworthy price behavior at Henry Hub. Forward Look data showed Henry Hub December basis trading as much as 3.0 cents higher than Nymex futures during the Nov. 18-23 period. Historically, Henry Hub basis tracks within a penny or so of the comparable Nymex contract. The spread first widened in late September and has continued to widen since then. Similar strength in basis was seen through the February contract.

Sources told NGI that traders appear to be willing to pay a premium in the physical market versus the futures market. Furthermore, with export demand now making up such a large portion of total U.S. demand, this may be something the U.S. market may have to get used to.

The hefty gains for the summer strip occurred even as U.S. inventories continue to improve.

On Thursday, the Energy Information Administration (EIA) reported the season’s first withdrawal from natural gas storage inventories on Wednesday, a 21 Bcf pull for the week ending Nov. 19. The EIA’s weekly inventory report was published at noon ET on Wednesday because of the Thanksgiving Day holiday.

Broken down by region, Midwest stocks fell by 13 Bcf while East inventories were down by 11 Bcf, according to EIA. The Mountain region recorded a 2 Bcf withdrawal, but the Pacific posted a 1 Bcf injection.

Participants on The Desk’s online energy chat Enelyst said most regions’ net changes were in line with expectations. The East pulled out a little less than expected, but market observers chalked it up to unsupportive weather.

Of the overall withdrawal, one Enelyst participant said, “Quite solid on a wind week that did upper 50 average GWhs.”

Total working gas in storage as of Nov. 19 stood at 3,623 Bcf, which is 320 Bcf below year-ago levels and only 58 Bcf below the five-year average, according to EIA.

Looking beyond the core winter months, EBW said October’s blowtorch weather put the storage trajectory on pace to climb above 1,450 Bcf by the end of March. Resurgent November production, a lack of coal-to-gas switching because of high prices, LNG demand inconsistency over the past month and recent bearish forecast shifts also have aided in the higher end-of-season call.

The December Nymex gas futures contract settled Wednesday at $5.068, up 10.1 cents from Tuesday’s close. January — which moves to the front of the curve on Monday — settled 7.9 cents higher at $5.114.