In an ominous sign of what may evolve to the end of the year, scorching heat across most of the country failed to spark a rally in natural gas forward prices for the July 16-22 period, according to NGI’s Forward Look. 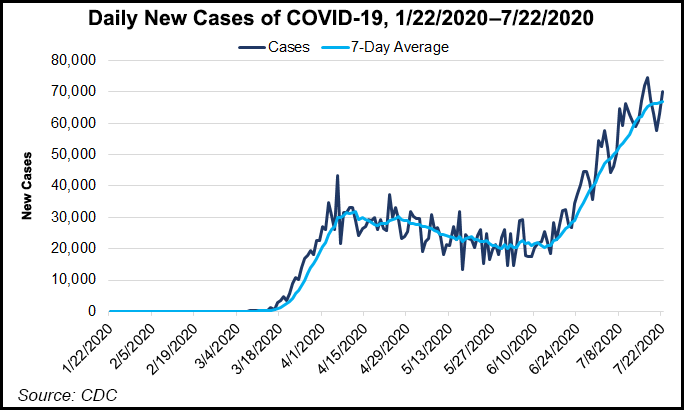 Instead, persistently weak global exports and continued uncertainty over the level of economic recovery amid Covid-19 drove prices about a nickel lower through the balance of summer (August-October) and the upcoming winter (November-March), Forward Look data show. Smaller shifts were seen for next summer and beyond.

The front of the Nymex futures curve held steady in the low $1.70/MMBtu range to end last week. However, on Monday, the August contract slumped to around $1.64 as weather models continued to lower the intensity of heat for the remainder of the month. Prices recovered a few cents by midweek, with the August contract at $1.681, the balance of summer at $1.745 and the winter at $2.662.

The latest weather data continued to be less supportive than advertised earlier in the month, while still showing a hotter-than-normal pattern for the next 15 days. The largest errors in the modeling were in the Midwest, where, outside of a few days here and there, the big heat has mostly been a “no-show,” a trend that looked to continue at least for the next couple of weeks, according to Bespoke Weather Services.

The cooler medium-range shift, around the end of the month into the opening of August, fits with what Bespoke expects to be a “temporary relaxation of the La Niña base state.” The firm still sees August winding up another hotter-than normal month, but tropical activity could dampen the outlook as a system brewing in the Gulf of Mexico (GOM) was set to bring rain to Texas through the weekend, limiting demand.

Though it’s been fairly quiet on the storm front, tropical activity typically ramps up in August, and the National Hurricane Center (NHC) on Thursday was monitoring three systems, including two in the Atlantic.

Tropical Depression Eight, likely to become a tropical storm, was expected to move across the northwestern GOM through Friday, with a projected landfall along the Texas coast Saturday, NHC said. Maximum sustained winds were near 35 mph with higher gusts, and slow strengthening was expected.

The storm is expected by the NHC to produce three to five inches of rain, with isolated maximum totals of eight inches, through Monday along the Gulf Coast from Louisiana to South Texas, and inland through south-central Texas and the Rio Grande Valley.

Meanwhile, Tropical Storm Gonzalo was forecast to approach the southern Windward Islands Friday night and move across the islands into Saturday evening, but the storm was smaller than initially thought. In addition, Category 3 Hurricane Douglas was in the Pacific on Thursday.

With the height of hurricane season still ahead, any further deterioration in summer heat would not bode well for prices.

On Thursday, the market appeared to breathe a sigh of relief after the Energy Information Administration (EIA)’s latest storage injection figure reflected what Bespoke said were “decently tight” supply/demand balances.

The EIA said inventories for the week ending July 20 rose by 37 Bcf, which compares with a 44 Bcf storage build in the same week last year and a five-year average increase of 37 Bcf.

“Extrapolated forward, the balance off this number would likely be sufficient to avoid containment, but not emphatic enough to suggest we avoid continued choppy price action in the near term,” Bespoke said.

By region, the East led with a bid of 21 Bcf followed by the Midwest with 19 Bcf, according to EIA. Mountain region stocks rose by 4 Bcf, while Pacific inventories declined by 1 Bcf. South Central inventories fell by 7 Bcf, which included a 3 Bcf injection into nonsalt facilities and a withdrawal of 10 Bcf from salts.

Market participants on The Desk’s online energy platform Enelyst were looking to potentially stronger LNG demand in the coming months for more clarity on the storage situation ahead of winter. Early indications for September cargo cancellations are tracking lower than they have the past few months, and NGI data was showing feed gas deliveries holding steady at around 3.5 Bcf/d. On Monday, LNG demand briefly moved above 4 Bcf/d.

“I think people are starting to pick up on the potential tight scenario, with September/October LNG cancellations not as low, and production declining with the current low rig count,” said Enelyst managing director Het Shah.

EBW said the LNG market remained untested, with significant sources of supply, including pipelines into Europe, operating well below capacity. If pipelines were to ramp up output, it could  close Europe and redirect international cargoes toward Asia, limiting gains in U.S. imports.

“Further, if the logic of early-month feed gas weakness and late-month feed gas strength holds true, September may not see any sizable gains until later in the month, adding to the case for potential declines in spot market demand and gas prices,” EBW said.

Indeed, the potential for meaningful storage injections may persist into November, according to Mobius Risk Group. The firm sees work left to be done on supply/demand balances to prevent this possibility. “In addition, the wild card of early winter weather leaves the November contract squarely in the cross-hairs of those still holding a bearish view in a market with October/January already at a remarkable minus $1.00” as of Wednesday.

Fueled by the supportive storage data, the Nymex August futures went on to climb some 10.4 cents to settle at $1.785 Thursday. The September contract jumped 11.7 cents to $1.835.

Further out the curve, the Calendar 2021 strip held near the $2.60 mark, a level that Mobius expects to be tested “vigorously” this fall. Remaining near this level would generate subpar returns for the gassy exploration and production community, according to the Houston-based firm.

“As a result, we expect sequential production numbers to be flat to lower for the foreseeable future, except for a minor early-winter rally driven by those who have astutely managed output to better capture value offered by the shape of the curve,” Mobius said.

Forward markets across the Lower 48 behaved in much the same manner as Nymex futures, however, some slightly steeper decreases in Appalachia may reflect changes on the supply side in the region.

Pipeline flow data points to an end to EQT Corp.’s production curtailments in the Marcellus Shale, according to RS Intelligence. Meters showed volumes only around 150 MMcf/d lower than early May levels. Volumes at these EQT meters were down only on Rockies Express Pipeline and Nexus Gas Transmission in Ohio, which RS attributed to natural declines as the company was not targeting its Utica Shale acreage.

“At an average of 32.5 Bcf/d over the last week, Appalachian production is running at its highest level since early January,” said analyst Ian McKinnon. “In that period, production in West Virginia — where Antero Resources Corp. is ramping up production to fill its unutilized gas pipeline capacity — is up 500 MMcf/d, offsetting declines of similar magnitude in Ohio.”

Pennsylvania output, in both the northeast and southwest portions of the state, was roughly flat, McKinnon said, although Appalachian production declines were likely to accelerate in the second half of this year, especially in Ohio.

Along the Texas Eastern Transmission pipeline, forward price action was more pronounced. This is likely because of the recent announcement that most of the restrictions in place since May would be resolved by October.

This could be from regional storage inventories tracking well above historical levels. The EIA’s reported 693 Bcf in East stocks is 122 Bcf above year-ago levels and 86 Bcf above the five-year average.