Despite prospects for brief upswings in natural gas demand, an overwhelming bearish sentiment continued to weigh on forward prices this week as recent mild spring temperatures throughout much of the country were seen lasting at least through the early part of May. May prices fell an average 7 cents from April 17-24, while June and the balance of summer strip (May-October) each lost an average 8 cents, according to NGI’s Forward Look. 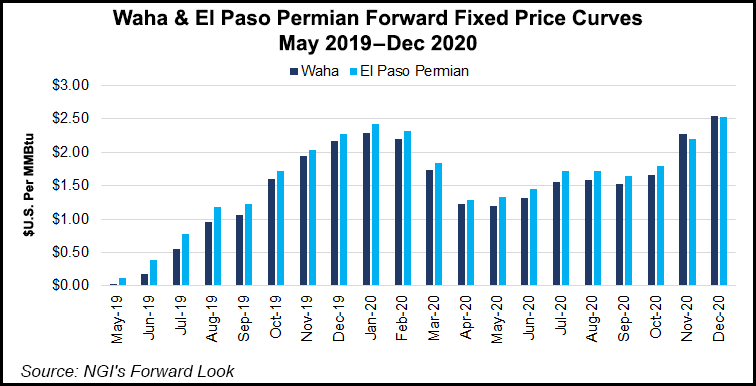 Initially, the Energy Information Administration’s (EIA) reported 92 Bcf injection, which was on target with expectations, confirmed that theory as May prices bumped up only a penny even as stocks moved ahead of year-ago levels. The prompt month, however, went on to gain another few cents throughout the rest of the session, settling at $2.514, up 5.2 cents on the day.

As for the EIA data, the South Central continued to surprise to the upside this week, with the EIA reporting a 45 Bcf build in that region. IAF Advisors’ Kyle Cooper questioned whether part of that storage build could be attributed to local distribution companies in the Midwest and Northeast indexing gas now for the upcoming winter and passing on the cost to ratepayers.

Looking ahead, analysts expect Thursday’s 92 Bcf build to be one of several large storage injections over the next few weeks that would continue to eat away at the deficit to the five-year average.

Nevertheless, Bespoke Weather Services said that although late April is not typically a “weather heavy” time of year by any means, by virtue of adding a few gas-weighted degree days (GWDD) every day this week, “the demand added since the end of last week is definitely not immaterial.”

Fifteen-day forecasts have shifted from some 30 GWDDs below normal to now a touch above normal, “and with considerably higher demand versus the same dates last year, which is quite a switch from especially the last couple of weeks,” Bespoke Chief Meteorologist Brian Lovern said.

The latest midday Global Forecast System data was mixed with a few days a touch cooler and a few warmer, but did hold cooler trends across the northern United States through the middle of next week, according to NatGasWeather. However, the data was a touch warmer May 4-9, with much of the country relatively comfortable with highs in the upper 60s to 80s, “although a touch hot over the Southwest where lower 90s are possible.”

Weather models overnight Wednesday had shifted demand higher, with both American and European data adding GWDDs to the forecast, according to Bespoke. In particular, the next several days featured some meaningful heating degree days in the north, along with some 85- to 90-degree highs in the South, boosting early season cooling demand there.

While the firm does not normally emphasize weather changes much at this point in the year, “this added demand should help further tighten up burns going forward,” Lovern said.

Meanwhile, the effect of lower gas prices is already showing up in daily supply/demand data, which illustrates little to no sequential production growth and elevated power burn/degree days, according to Mobius Risk Group. In the firm’s estimation, “any resulting storage build of less than 110 Bcf over the next seven storage weeks should be viewed as notably bullish, and results greater than 120 Bcf as notably bearish.”

While the vast majority of pricing hubs across the country softened along with futures, West Texas markets were the diamond in the rough as prompt-month prices there climbed into positive territory after three straight weeks at sub-zero levels. The move back into the black occurred as cash prices in the region closed in on $1 Wednesday.

Waha May jumped 34 cents from April 17 to 24 to reach 2.7 cents, while June slipped a nickel to average 17.2 cents and the balance of summer picked up 3 cents to hit 73 cents, Forward Look data show.

Despite the Permian’s recent strengthening in both the cash and forward markets, analysts continue to view the overall price environment as weak for the next several months, and likely much longer as new gas takeaway capacity is not expected until this fall. Nevertheless, the risk of increased Mexico demand growth providing an outlet for constrained Permian natural gas keeps 3Q19 Waha basis relatively supported, according to BofA Merrill Lynch Global Research.

In addition, the potential for high gas to oil ratio wells to shut-in limits Waha weakness, and could provide a brief price spike if too many wells shut in production. “Any price spike would likely be brief as we expect shut-ins would quickly return to service,” said BofA Merrill Lynch Global Research’s Clifton White, commodity strategist.

Elsewhere across the country, a battle could be brewing in the West as storage inventories in the Pacific region are near the seasonal lows last seen exiting the Polar Vortex 2013-2014 winter, according to researchers. In addition, southern California has been dealing with its own natural gas infrastructure issues since late 2015 when Aliso Canyon began leaking natural gas.

“Aliso Canyon is currently operating at reduced capacity, which makes it difficult for southern California to balance gas demand during peak periods,” White said. “Low storage levels and reduced deliverability from Aliso Canyon force the Pacific region to rely on the Mountain region to balance during peak days.”

SoCal Citygate basis is pricing significantly over Rockies during peak summer and winter months out the curve, according to Forward Look. SoCal Citygate summer basis sat Wednesday at plus $1.68, while Northwest Sumas summer basis sat at minus 22.3 cents. Despite the nearly $2 spread between the two points, White said that “during peak days, SoCal might have to price even higher due to increased competition from the Pacific Northwest.”