A major revision in the April weather forecast coming back from the Easter weekend took a big chunk out of natural gas forward prices for the period ending April 8. The short work week ended with the May contract down an average 10.0 cents and the balance of summer (May-October) off 7.0 cents, according to NGI’s Forward Look. 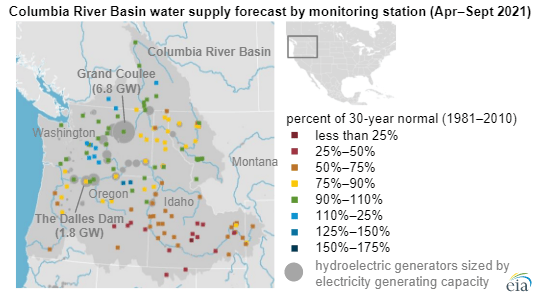 The rest of the curve fared much better, with the majority of pricing locations seeing gains and losses of less than a nickel.

The bearish weather shift over the weekend accentuated declining demand, according to EBW Analytics Group LLC. The May Nymex contract plunged to a year-to-date low of $2.456/MMBtu on Tuesday’s close, though it recovered from there and by the close of Friday’s session was at $2.526.

April is now forecast to feature a mere 293 gas-heating degree days, according to EBW, which would be the second warmest of the past decade. Weakness, it said, is being further accentuated by a sluggish economy and amplified seasonality amid a widespread shift to working from home.

“Any sustained near-term rebound for the May contract remains unlikely in the face of mild April weather, but signs of support may soon begin to emerge,” EBW said.

As weather becomes increasingly warm, this should exert “progressively less bearish” pressure on natural gas fundamentals as spring transitions away from winter and toward the cooling season ahead, according to EBW. Planned storage injections from local distribution companies also pick up in mid-April.

“With the five-year average likely to shift from a bearish to a bullish direction by late April, a bottom for Nymex futures may be arriving later this month,” EBW said.

After several weeks of unexpected storage data, the Energy Information Administration (EIA) reported a storage injection for the week ending April 2 that was right in the middle of market expectations.

EIA said Thursday that inventories during the reference period rose by 20 Bcf, which fell short of the year-ago 30 Bcf injection but was much higher than the five-year average build of 8 Bcf.

Ahead of the EIA report, major surveys clustered around an injection in the low 20s Bcf. NGI’s model forecast the injection at 23 Bcf.

“This is as neutral as a number can get, as 20 Bcf is basically right in the middle of the range of market estimates,” said Bespoke Weather Services.

The forecaster said the EIA figure still does not reflect a “pretty” supply/demand balance yet, as far as supporting a sustainable rally. It noted that recent balances extrapolated out through the end of the injection season point to roughly 4 Tcf in storage.

Tudor, Pickering, Holt & Co. (TPH) analysts also broke down the latest storage data. They noted that four of the last five EIA storage figures, including the latest one, have come in bearish to the five-year average.

“Unfortunately, the next print looks even worse,” the TPH team said.

Flow data shows residential/commercial demand “falling off a cliff” (down 9 Bcf/d week/week), and early modeling points to a roughly 75 Bcf build relative to norms of 36 Bcf, according to analysts. The good news, they said, is lower numbers on the thermostat are expected as forecasts show colder-than-normal weather for the next two weeks.

Outside of weather, TPH said the fundamentals “still look solid.”

Liquefied natural gas (LNG) feed gas demand is holding strong in the mid-11s Bcf/d versus modeled projections of around 10 Bcf/d. Mexican exports also are running about 0.5 Bcf/d higher than expected, with the combined demand uplift more than offsetting production, which is running around 1 Bcf/d above its forecast.

“As we move through what is expected to be a sleepy shoulder season, production will be the variable to watch, with the Haynesville and associated gas the most likely growth candidates paired against the Northeast, which may see temporary declines as shoulder season maxes out egress and widens basis,” TPH analysts said.

By the middle of May, the market is likely to be staring down a bullish injection season, according to EBW, with growing deficits, hot summer weather, strengthening power burns, rising industrial demand and a booming economic rebound driving the momentum.

Many of these same factors have allowed gas prices to decline in recent weeks, but all are expected to reverse higher in the months ahead, the firm said.

At the same time, LNG demand is expected to remain elevated throughout the summer as low storage inventories in Europe should keep the need for imports high. NGI data showed feed gas volumes to U.S. terminals tumbling more than 2 Bcf day/day to around 9.5 Bcf on Thursday, but volumes had already begun to rebound by Friday, when deliveries bounced back close to 11 Bcf.

The sharp pullback coincided with a one-day emergency system test scheduled at the Sinton compressor station on the Corpus Christi Pipeline that feeds the LNG export terminal. Wood Mackenzie said throughput on the pipeline would be reduced to zero, and feed gas deliveries on the pipeline could be impacted by as much as 0.8 Bcf/d.

TPH analysts agreed the outlook for LNG this summer appears to be strong. LNG sendout in Europe currently sits at around 11.5 Bcf/d, which is well below their modeled 13.1 Bcf/d for April. The lower sendout is partly because of strong Asian demand for LNG amid the need to replenish their limited storage following a cold winter.

“This will be a key dynamic to track as media reports recently indicated Asia may be stronger buyers this summer to better prepare for next winter, after nearly getting left out in the cold during the December/January cold snap,” TPH said.

The firm noted that Asian imports in March beat its expectations. “With Europe needing to increase imports by roughly 30% year/year to refill storage, a summer bidding war isn’t out of the question and should support strong pricing for Title Transfer Facility and Japan Korea Marker prices.”

Exports to Mexico also are projected to start ramping up by next month. Mexico gas demand typically peaks in the summer amid widespread heat and limited domestic production.

Mexican state oil company Petróleos Mexicanos (Pemex), however, is forecasting a base-case scenario increase of natural gas production to 4.19 Bcf/d in 2021 from 3.64 Bcf/d realized in 2020, according to its newly released 2021-2025 business plan. The production ramp-up “reflects the incorporation of new fields, such as Ixachi and Quesqui,” Pemex said.

Meanwhile, EBW pointed out that over the past six weeks, speculator positioning reduced long exposure by 161,000 contracts (-45%) amid the streak of EIA storage misses, industrial demand concerns, strong production and warm weather. “This dip in sentiment provides headroom for Nymex futures,” it said.

While the majority of North American pricing hubs tracked closely with benchmark Henry Hub, markets in the Pacific Northwest showed some comparative strength for the trading period ending Wednesday.

Though Pacific Northwest markets recorded losses at the front of the curve, they were much smaller than those seen elsewhere across the country. That’s because of a mixed water supply forecast for the 2021 water year that could boost the amount of gas needed for power generation in the region. The 2021 water year began in October and runs through September.

The 2021 water year followed a hot and dry summer, with precipitation levels below normal across most of the region, EIA noted on Thursday. However, both precipitation and snowpack accumulation started returning to normal levels in February. In addition, below-normal temperatures in March helped preserve most of the snowpack.

As of Wednesday, the NWRFC projects The Dalles Dam water supply forecast for April through September to be 83.7 million acre-feet, about 9.7% lower than the 30-year normal.

EIA closely monitors and uses the water forecast as input into its STEO. In the April STEO, EIA said overall, it expects hydroelectricity to account for 7% of U.S. electricity generation in 2021, almost one percentage point lower than in 2020.

Given the increased probability of more gas being needed for power generation in the coming months, Malin May prices slipped only 1.0 cent for the period ending April 7 to reach $2.483, Forward Look data showed.

All the losses along the Malin forward curve fell short of those seen along the Henry Hub curve, and the modest increase for the summer 2022 package compared to no net change in the comparable Henry contract.

Similar price behavior was seen in northern California and across the Rockies, Forward Look data showed.