Massive snowstorms and the threat of intensifying frigid air in the coming weeks amped up the gains for natural gas forwards in the final days of January into early February. March prices averaged 19.0 cents higher for the period, while solid export demand seen this summer (April-October) lifted the strip an average 8.0 cents, according to NGI’s Forward Look. 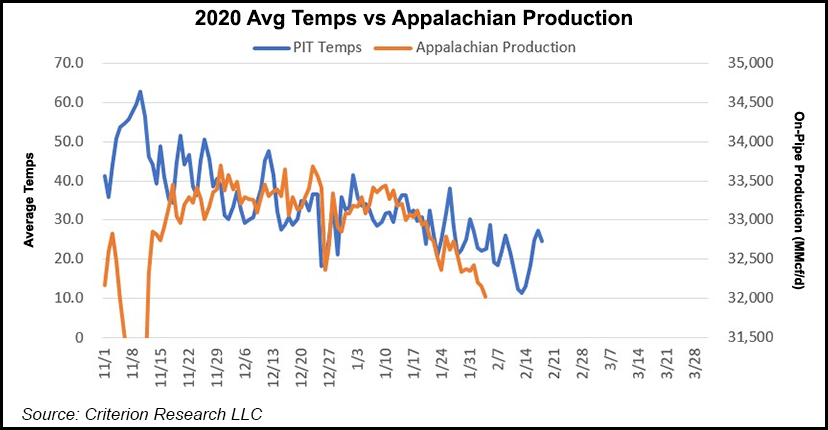 Smaller increases were seen for next winter (November 2021-March 2022), but prices were barely changed for the summer 2022 months.

Although this winter was heading toward one of the warmest on record, a string of bitter storms that started circulating through the Lower 48 in late January have revived demand and fueled prices. The latest weather system was forecast to push into the Rockies and Plains into Friday, then spread across the northern and eastern United States, according to NatGasWeather. The forecaster said daytime temperatures this weekend may fall close to zero in some areas, while overnight lows in North Texas and the South could fall into the 20s.

What’s even more impressive, though, is the Arctic blast that’s forecast to follow late next week.

The biggest driver of this colder setup, according to Bespoke, is the Atlantic blocking, which is forcing the strong cold air mass developing in Western Canada southward underneath the block. This is impacting the populated areas in the eastern half of the United States.

“We still feel cold wanes after mid-month, but right now we see variability, not an outright warm pattern,” the forecaster said.

Even with some variability in the forecast, the stage is set for a huge shift in the supply outlook. U.S. storage inventories have maintained a healthy cushion for more than a year, but that’s all set to change in the coming weeks thanks to the strong demand brought on by the sustained chill.

On Thursday, the latest Energy Information Administration (EIA) data showed the surplus to year-ago levels still hanging on. The EIA reported a 192 Bcf withdrawal from storage for the week ending Jan. 29, the largest draw of the season so far. The drop brought working gas in storage down to 2,689 Bcf, which is 41 Bcf above last year and 198 Bcf above the five-year average, according to EIA.

Mobius Risk Group said weekly withdrawals of 200 Bcf or more have become “snow leopard-like” in recent winters — “seldom seen and when they occur, they are not around for long.” The Houston-based firm said there have been only three such withdrawals in the past three winters combined including this winter.

“Importantly, we could be tracking toward a string of withdrawals at 200 Bcf or more based on current weather forecasts,” Mobius said.

If these three weeks tally a cumulative storage withdrawal of 600 Bcf or more, the current year/year surplus would flip to a deficit of more than 200 Bcf, according to the firm. This theory assumes that the EIA figures from Thursday and next week bring inventories down to flat with year-ago levels, it said.

Until then, Mobius expects the market to remain volatile in response to daily weather changes. “If weather remains colder than normal for the balance of February, we will likely enter the month of March with less than 2 Tcf in storage, and storage ratchets.”

Armed with the latest European weather model run, which was on track to gain more than 20 heating degree days since Wednesday night, the March Nymex contract settled Thursday at $2.935, up 14.6 cents day/day.

Despite the double-digit gains across U.S. forward curves, market observers were quick to criticize the pricing behavior along the Nymex futures curve on Wednesday. Though weather models had pulled back on some of the projected demand in the 15-day outlook, the coming pattern remains notably colder than anything the market has experienced the past couple of years.

Meanwhile, liquefied natural gas (LNG) demand has been solid throughout the winter and is seen remaining strong through the summer as European buyers look to replenish their dwindling supply.

EBW Analytics Group said although spot market strength typically has a large influence in prompt-month futures trading, that won’t be the case in February. Despite the major cold weather shift, there is no threat of running out of gas supplies this winter, the firm said. “Absent supply adequacy risks, the market can more adroitly handle exceptionally briefly higher spot market prices without price spikes in the front-month contract.”

EBW’s most likely scenario calls for a retest of resistance at $3.00, with prices ultimately pushing higher. However, potential sentiment wary of $3.00 prices may limit upside price realization over the next seven to 10 days.

Looking ahead, the firm said the market may begin looking to the spring shoulder season. If the frigid outlook persists into March, elevated gas demand and rapidly falling storage inventories should put structural pressure on Nymex futures. EBW noted that LNG feed gas demand is likely to run 2.0-2.5 Bcf/d above year-ago levels in March and April, while dry gas production could run 2.0-2.5 Bcf/d below year-ago levels over the same period.

In the spring, the market may be confronted with the storage deficits and the possibility of expanding deficits, according to EBW. This would be driven by tight core fundamentals and cause upside price pressure likely to continue. Supportive comparisons to last year’s widespread economic shut-ins may help generate further bullish momentum.

“We estimate 6.1 Bcf/d of implied domestic demand destruction during April and May 2020 due to the pandemic,” EBW said. “Even if only half of demand is recovered, an incremental 3.0 Bcf/d of year/year domestic demand — on top of higher LNG feed gas demand and lower production — is likely to further tighten the supply/demand balance.”

Price moves across the U.S. forward curves were similar to the action seen in the spot market over the past week in the key Northeast region, where record snowfall fell and more was possible.

AccuWeather was growing more skeptical of one scenario that would suggest a major snowfall event for big cities like Washington, DC, Philadelphia and New York City. Instead, they were favoring the chances of a quick-hitting snowfall that could impact parts of the interior Northeast and potentially affect parts of New England.

“We are not at the point where the big snowstorm should be totally called off, as there is still room for the pattern to come together — the chance of a big northeastern U.S. snowstorm on Sunday is not zero percent,” AccuWeather meteorologist Bernie Rayno said.

The main factor that would determine whether a major snowfall event unfolds would be if two storm systems were to merge, creating a “powerhouse” storm, according to AccuWeather. One clipper-style storm, or a fast-moving system with little moisture, is forecast to dip down across the Midwest, while another storm will develop near the Gulf or Southeast coast and move up the Eastern Seaboard. A small shift in the jet stream could impact both storms.

If they were to collide, a heavy snowfall and blizzard conditions could still occur, according to Rayno. Regardless, there may be more opportunities for snow events of various intensity and coverage into the middle of February for the East, AccuWeather said.

“The pattern favors dead-of-winter conditions for the North Central states with severe cold related to a displacement of the polar vortex,” the forecaster said. “As the most intense cold will take aim at the Upper Midwest, periodic bursts of Arctic air are predicted for the Northeast.”

Similarly sharp upticks were seen at other pricing locations in New England. Smaller, though still robust, gains were seen elsewhere in the Northeast. Transco Zone 6 NY’s March contract was up 26.0 cents to $2.975, while the summer package tacked on 7.0 cents to hit $2.357. Prices for next winter were up 4.0 cents to $4.740.

Also closely aligning with the cash markets were pricing locations in Appalachia. For example, when looking at Dominion South and Texas Eastern M-3, Delivery, the latter pricing location firmed significantly more at the front of the curve, which is similar to what occurred in cash trading over the period. M-3 March prices climbed 32.0 cents from Jan. 28-Feb. 3 to reach $2.855. For comparison, the prompt month at Dominion South rose 19.0 cents to $2.403. The rest of the curves followed a similar trajectory, according to Forward Look.