Natural gas forward prices made huge leaps during the period ending May 4 as production struggled to grow beyond recent levels and heat began to intensify in parts of the country. With hefty storage deficits poised to hold steady for a while longer, June fixed prices rallied by an average $1.57/MMBtu, according to NGI’s Forward Look. 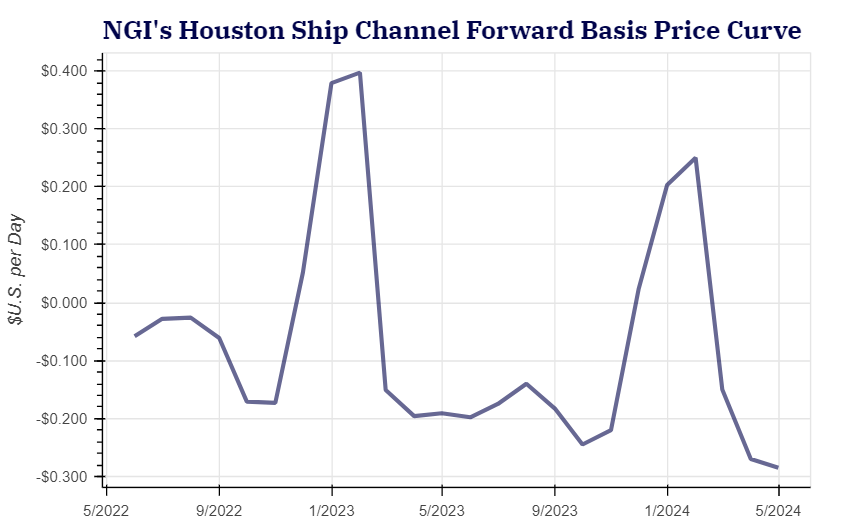 The stout price gains extended through next year, given robust export demand in the wake of Russia’s invasion of Ukraine. Fixed prices well above $8.00/MMBtu were seen at the majority of U.S. locations.

The latest rally mirrored price action along the Nymex futures curve, where huge intraday swings took place in the days leading up to the May contract’s expiration. That contract rolled off the board at $7.267, up a massive 41.7 cents on the day. June stood at $7.339 on the eve of becoming the front month. By Friday, it settled at $8.040 after soaring to an $8.996 intraday high overnight.

“Bulls have had a plethora of elements go their way the past several months,” NatGasWeather said. “It’s going to be a dangerous weekend to hold and where the reopen is likely to bring a large gap with feast or famine results.”

Bespoke Weather Services pointed out that despite the overall decline in weather-led gas demand, South Central cooling degree days could hit daily records on several days over the next week to 10 days. There is a risk of 98- to 100-degree highs in cities such as Houston this weekend. “Given the relevance of this region to Henry Hub, it definitely gives the weather component a bullish skew.”

The rise in the mercury alone provided support for basis prices in the region. But, heat also is building in Mexico, portending rising exports flowing via pipeline south of the border. Last spring, gas flowing to Mexico topped 7 Bcf/d by April.

As such, Houston Ship Channel June basis was up 9.0 cents to minus 5.8 cents, according to Forward Look. Balance-of-summer prices, meanwhile, stood 7.0 cents behind Henry Hub at $8.36. By the winter, however, Houston Ship Channel moves to a roughly 10-cent premium to the U.S. benchmark, with fixed prices averaging $8.326.

Similarly, Agua Dulce June basis climbed 10.0 cents on the week to minus 2.6 cents, Forward Look data showed. The balance of summer averaged 3.0 cents below Henry Hub at $8.400, while the winter strip averaged an 11.6-cent premium to Henry Hub at $8.344.

Overall, the stout deficit in Lower 48 inventories is at the heart of the supportive long-term outlook. Inventories have shown little signs of improvement one month into the traditional injection season.

The latest round of government inventory data may have offered some optimism, though, at least on the surface. The Energy Information Administration (EIA) said stocks grew by 77 Bcf for the week ending April 29, coming in several Bcf above even the highest estimate ahead of the report.

The 77 Bcf injection compared with a five-year average injection of 78 Bcf and the 53 Bcf increase recorded for the year-earlier period, according to EIA.

The South Central region continued to mount the biggest week/week increases, with inventories rising 40 Bcf for the period. This included a 22 Bcf gain in nonsalt facilities and an 18 Bcf rise in salts, EIA said. East and Midwest stocks each rose by 15 Bcf, while the Pacific picked up 5 Bcf. Mountain inventories edged up only 2 Bcf.

In analyzing the EIA data, participants on The Desk’s online energy chat Enelyst noted the larger-than-expected stock build in the South Central. “Get the gas in while you can,” said one participant. The escalating heat in the region may lead to stronger power burns and fewer molecules available to be injected into storage, the participant said.

Criterion Research LLC’s James Bevan, vice president of Research, also questioned whether the Permian Highway Pipeline ran at a higher utilization rate ahead of its planned maintenance outage this week. Throughput along the 2 Bcf/d pipeline was to be cut in half through Friday (May 6), with varying operational capacities throughout the month.

Total working gas in storage climbed to 1,567 Bcf as of April 29, 382 Bcf below the same time last year and 306 Bcf below the five-year average, according to EIA.

“These are bearish surprises at the margins but for an uber bullish state of undersupply,” said an Enelyst participant. “I am shocked supply is as low as it is. There is absolutely no way we don’t see $10-plus.”

Mobius Risk Group said May and June would be critical months for the market focused on improving deficits. For reference, the same eight-week period last year posted a cumulative build of 728 Bcf, or 91 Bcf per week.

An early look at the next EIA storage report points to an 80-85 Bcf injection, which would be another 10-15 Bcf reduction in the year/year storage deficit. However, more attention may be on the subsequent two reporting periods, where the odds of a triple-digit build may be weighed.

“Daily storage facility data will take on critical importance” over the two-week period beginning Friday (May 6), “with much scrutiny placed on the sample of salt storage facilities which post on publicly available electronic bulletin boards.”

That said, no one in the market wants to inject gas at these prices, according to RBAC Inc.’s Bethel King, senior director of market analysis for the analytics firm. Instead, the market may wait until the shoulder months to meaningfully replenish inventories. A mild summer, however, could support a stronger rebuild.

“A lot of it will come down to weather. People are cognizant of these higher prices, and it’s incentivizing people to wait as long as possible to inject,” King told NGI.

However, waiting for that perfect price may be a fool’s game. King said the higher price environment – notwithstanding the typical ebbs and flows throughout the year – may be around for the long haul.

She expects prices to remain elevated for the next couple of years. In particular, the steady pull on U.S. liquefied natural gas (LNG) is seen contributing to a strong demand picture. Industrial and power generation demand also has been strong, despite the higher prices, with producers playing catch-up amid supply chain and labor issues, along with a continued focus on financial discipline.

RBAC is modeling dry gas production to average 97.5 Bcf/d this year and 100 Bcf/d in 2023. Whether this balances the market, however, is anyone’s guess. With LNG capacity poised for incremental growth this year, and 2023 already looking tight given the robust demand picture, 2024 may offer the best opportunity for a sustained pullback in prices.

Even then, “we feel the market is backwardated for good reason,” King said. “Prices will go down, but I don’t see us going back to $3.50. Maybe $4.00 will bring us some relief.”