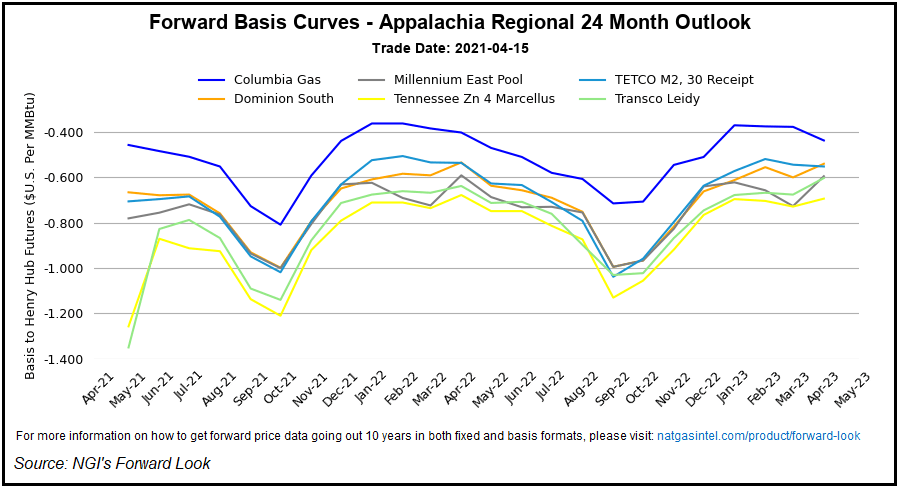 For the April 8-14 period, fixed prompt-month prices at Henry Hub added 10 cents to average $2.619/MMBtu. Stronger prices at the national benchmark, which paralleled gains in Nymex futures, set the pace for fixed price increases of around a dime at numerous hubs throughout the Lower 48 during the week, Forward Look data show.

A spate of chilly April weather helped support strengthening the May Nymex contract during the period, with the prompt month rising from the low $2.50s area late last week to trade well into the $2.60s on Thursday.

The U.S. Energy Information Administration’s (EIA) latest storage report — a net 61 Bcf injection into Lower 48 gas stocks for the week ending April 9 — came in on the low side of consensus predictions, lending additional support for prices.

By the time the dust settled Thursday, May finished at $2.658/MMBtu, up 4 cents from Wednesday’s regular session close. The prompt month continued to climb on Friday and hit an intraday high of $2.700. Ultimately, the May contract settled slightly below that level at $2.680, up 2.2 cents day/day.

Tudor, Pickering, Holt & Co. (TPH) analysts said the EIA’s 61 Bcf injection was bullish versus expectations but “distinctly bearish” compared with seasonal norms of 36 Bcf. The build was driven entirely by weather, according to TPH, as degree days were a whopping 22% below the five-year average.

“However, with forecasts turning cooler and exports running hot, we’re expecting some tight prints to close out April,” the firm said.

Liquefied natural gas (LNG) feed gas continues to run consistently above 11 Bcf/d, and Mexican exports have “joined the party,” outpacing TPH’s model by around 1.5 Bcf/d over the past week. Flows to Mexico topped 7 Bcf/d, easily eclipsing last summer’s high of 6.4 Bcf/d despite April typically being a low-demand month.

On the supply side, after pushing through 92 Bcf/d the prior week, production has normalized back toward the firm’s modeled 90 Bcf/d this past week. TPH said the Midcontinent, Northeast, Permian and Haynesville Shale all contributed to the slide.

“From our seat the summer setup looks distinctly bullish, with storage volumes expected to dip meaningfully below the five-year average beginning in June,” TPH said.

In updates to clients on Friday, NatGasWeather noted major revisions in both the Global Forecast System (GFS) and European models that put the data sets more than 25 heating degree days apart, with the GFS to the bearish side and the European to the bullish side. Both models remain cold enough through the end of the coming week as a series of colder-than-normal weather systems sweep across the country. Where differences lie are in the pattern for April 23-26, as the European model sees another cold shot push into the Midwest and Northeast, while the GFS forecasts only a glancing blow.

Analysts at EBW Analytics Group in a recent note pointed to the cold April temperatures and “continued strength in core market fundamentals” as the key drivers behind recent gains in the May futures contract.

“Much milder-than-normal weather has repeatedly blasted natural gas since the beginning of winter,” the EBW analysts said. A normal weather scenario “can be bullish for natural gas. Particularly if forecasts for hot summer weather materialize as a tailwind, upside potential for late-summer to mid-winter contracts remains substantial.”

Like the TPH team, the EBW analysts see a “confluence of bullish factors” that could mean “an increasingly firming positive outlook” for natural gas prices developing by the back half of May. They pointed to potential record-level LNG demand in May, rising exports to Mexico, a further rebound in overall economic activity and “booming industrial demand,” among several other factors.

“These forces are likely to continue to develop throughout the summer, while the early stages of a sustained move higher are likely by late spring or early summer,” the EBW analysts said.

There’s further upside for U.S. LNG demand heading into late 2021, according to the analyst.

“Two Louisiana projects, Venture Global’s new Calcasieu Pass facility and the sixth train at Cheniere’s existing Sabine Pass terminal, have both indicated that they will begin exporting commissioning cargoes by year’s end — ahead of their originally proposed construction schedules — a prospect that could boost Gulf Coast feed gas demand to even greater heights by the fourth quarter of 2021,” Schneider said.

While exactly when new demand associated with Calcasieu Pass and Sabine Pass Train 6 will hit the market is unclear, Schneider estimated that some part of the incremental 2.25 Bcf/d of export capacity associated with the two projects is likely to be online before the end of the year. This means total U.S. LNG export demand could climb “closer to the 12 Bcf/d level” by the end of 2021, the analyst said.

“We see this as just the beginning of a strong bull run for global gas, with Cheniere Energy Inc. best positioned to capitalize,” TPH said.

The firm pointed out that European storage has dropped to some 18% below the five-year average following a week of late-season draws. Furthermore, with Asian demand also strong, analysts “simply don’t see enough gas to go around this summer to sufficiently restock inventory.

“This positions the market for a really strong summer as competition for gas heats up and, with fundamentals much more bullish than last winter, a repeat of the January pricing bonanza could certainly be in the cards.”

Additionally, the TPH team expects LNG supply additions to be “relatively lean” over the next two years, which they see “extending the pricing strength into 2023.”

As for the outlook on industrial demand, analysts at Energy Aspects recently forecast a 1.1 Bcf/d increase for full-year 2021 compared to 2020 levels.

“Vaccination rates are speeding up, and numerous states are undertaking broader reopenings, putting our view of a bounce back in industrial demand…and commercial load on firmer ground,” the firm said in a recent research note. The improved outlook for industrial demand is based on “ongoing gains in gas use for steel demand on new and returning capacity. Additionally, capacity utilization in refining — the second largest sector for industrial gas use — has risen to 84%, the highest level since March 2020.”

With industrial and commercial activity resuming and residential demand expected to remain higher than pre-pandemic levels, Energy Aspects projected a 2.6% year/year increase in power demand for the April-October period.

“Data for March 2021 show a year/year increase in demand of about 0.4%, which includes comparisons to the first half of March 2020, prior to widespread lockdowns,” the firm said. “On a weather-adjusted basis, we expect loads in the Northeast to return to 2019 levels by the start of 3Q2021, and they have already met that benchmark in Texas.”

Forwards trading for the April 8-14 period produced a few outliers that bucked the broader trend and saw their basis differentials shift notably. On the West Coast, gains in Southern California outpaced the rest of the country. SoCal Citygate fixed prices for May surged 41 cents during the week to average $3.368. SoCal Border Avg. climbed 20 cents to $2.746.

The latest 15-day forecast from Maxar’s Weather Desk Wednesday showed warmer temperatures blanketing the West Coast, including above-normal temperatures in the Southwest during the April 25-29 time frame. A “drought has a role in enhancing the warmth” in this region during the period.

Meanwhile, two hubs in the Appalachian Basin saw their basis differentials widen during the period. Tennessee Zn 4 Marcellus fixed prices for May tumbled 30 cents for the week to $1.358, while Transco Leidy fell 43 cents to $1.270.

Transcontinental Gas Pipe Line Co. posted an update to its electronic bulletin board outlining an upcoming system outage scheduled to start May 1 as part of the pipeline’s Leidy South expansion project.

During the outage, planned for May 1-31, receipts and deliveries at the pipeline’s  “Leidy-Dominion,” “National Fuel – Leidy,” “National Fuel – Wharton” and “Wharton – North Penn” locations would be unavailable, according to the operator.