A major turnaround in weather-driven demand expectations flipped the script in the natural gas forwards market during the Feb. 9-16 trading period, sending prices sharply higher as traders braced for another round of frigid temperatures on track to arrive later this month. 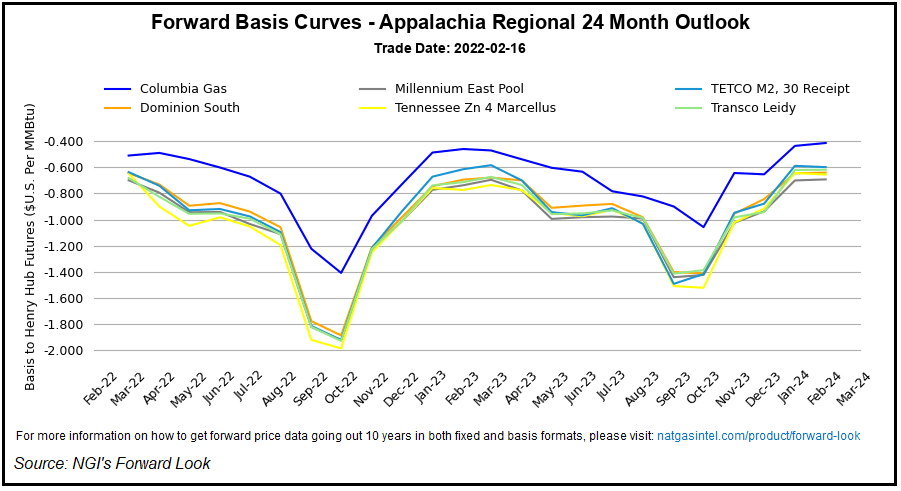 Nymex Henry Hub futures similarly mounted a swift rally, picking up more than 75 cents over the previous three sessions as of Wednesday’s settle. Thursday saw the front month pare those gains, however, with March giving back 23.1 cents to settle at $4.486.

Forecasters during the trading week chronicled a dramatic and surprising change in the temperature outlook for late February into early March. A pattern that once looked meek and mild had morphed into something far more frigid.

Compared to the prior week’s outlook, the extent of the change in the forecasting by midweek was “about as strong as you will ever see, having gone from a pattern that looked poised to warm to significantly above normal levels to one now easily colder than normal,” Bespoke Weather Services told clients.

With Old Man Winter poised to reassert himself heading into the last leg of the heating season, several hubs outgained the national benchmark during the Feb. 9-16 period, most notably New England locations.

However, there were indications Thursday that the bullishness building in the weather outlook had reached its peak. Recent runs from both the European and American weather models failed to sustain the colder momentum observed earlier in the week, according to Bespoke.

“All of the guidance remains skewed to the cold side, but it was our view that, at the price levels we had reached” on Wednesday, “we would need even more cold to hold or continue higher, and, at least for now, that proved to be correct,” Bespoke said Thursday.

Meanwhile, the latest Energy Information Administration (EIA) storage report Thursday landed on the bearish side of consensus and failed to stop the price pullback.

The latest EIA print “does continue to reflect tight supply/demand balances, but those balances will loosen now that production has returned,” Bespoke said. “Given that the weather forecast remains on the cold side, we expect more choppiness ahead, as the market may find it difficult to move any higher than where we have already been this week. But it may not move significantly lower, either, unless the forecast warms back up more than we currently see.”

EBW’s Rubin cautioned that the sharp sell-off in the week-earlier period could be a preview of future price action should March temperatures materialize as bearish. That’s a distinct possibility based on longer-range forecasting from DTN, according to the analyst.

In the context of projected cold and the likely end-March storage carryout, gains had appeared overdone prior to Thursday’s sell-off, Rubin said.

Regionally, March basis weakened at several Appalachian Basin locations during the Feb. 9-16 trading period, including a 10.7-cent discount at Eastern Gas South, which finished the period 64.4 cents back of Henry Hub.

Production estimates from Tudor, Pickering, Holt & Co. (TPH) during the week showed Marcellus Shale output back to highs observed in mid-December at around 29.0-29.5 Bcf/d. The Utica Shale, meanwhile, was off around 0.5 Bcf/d versus November and December levels in recent estimates from the firm.

Elsewhere across the supply landscape, TPH observed strength both from the Haynesville Shale (with output “near a peak” at around 13.5 Bcf/d) and from associated gas plays.

The Permian Basin was “flirting with all-time highs” during the week at 13.7 Bcf/d, TPH analysts said. The Eagle Ford Shale was “tracking at the highest levels since 2021,” while the Bakken Shale was “light of November to mid-December highs…but looks to have put the early New Year doldrums behind it.”

What’s more, Anadarko Basin output in recent estimates was at its highest point since March 2020, according to the firm.

“Looking forward, we continue to expect Gulf of Mexico volumes to return to more than 2 Bcf/d” from recent levels around 1.7 Bcf/d, “with the Haynesville and associated plays expected to continue to track higher through the year,” the TPH analysts said.