Riding the momentum from rallying futures prices as the natural gas market begins to look optimistically toward summer, forwards firmed by the double digits throughout much of the Lower 48 during the April 22-28 trading week, NGI Forward Look data show. 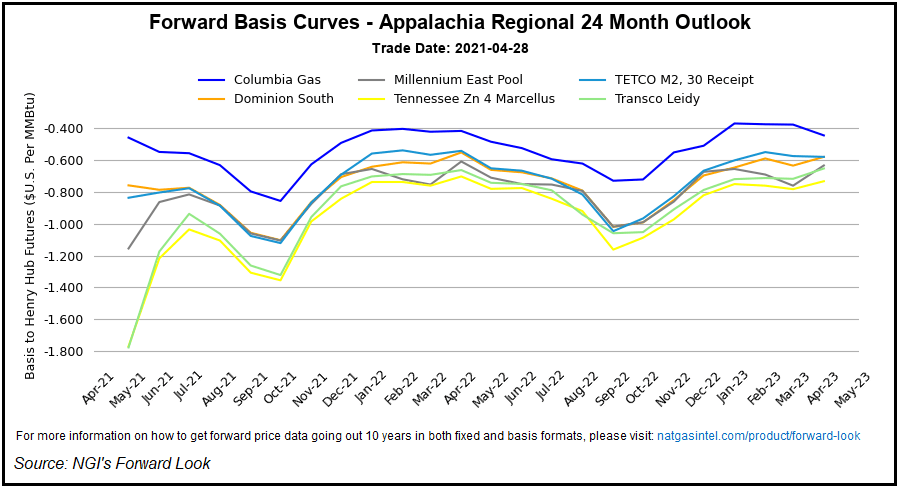 With continued strength in export volumes — via liquefied natural gas (LNG) and pipeline to Mexico — providing the fuel and a maintenance-related drop in production creating the spark, May Nymex Henry Hub futures surged nearly 20 cents in the three days leading up to Wednesday’s contract expiration.

While the June contract pulled back in its first day as the prompt month Thursday, the bullish run for May prices established a foundation for widespread gains in forwards trading at numerous locations during the April 22-28 time frame.

“The largest impacts are concentrated in the Northeast, where there is planned pipeline maintenance as well as what appears to be unannounced operator field maintenance,” Wood Mackenzie analysts Nicole McMurrer and Laura Munder wrote in a note to clients.

The analysts highlighted impacts to flows in Northeast Pennsylvania amid maintenance on the Millennium Pipeline. Maintenance events on the Nexus Gas Transmission and Rockies Express pipelines contributed to restrictions on flows in Ohio, according to McMurrer and Munder.

The restricted flows lent upward momentum to futures prices, but the recent pipeline maintenance proved unkind to forward prices at supply hubs in the Appalachian Basin.

Points in the Mid-Atlantic, meanwhile, fared considerably better. Transco Zone 5 fixed prices for May rallied 29 cents to reach $2.923, with basis improving 12 cents month/month to trade roughly flat with Henry. Dominion Energy Cove Point fixed prompt month prices surged 53 cents to $3.153. In terms of basis, that marked a 35-cent improvement month/month for the hub, which finished the period at a 22.8-cent premium to the national benchmark.

Elsewhere in the Lower 48, hubs rallied alongside Henry, picking up gains of around 15-25 cents. In the Midwest, Chicago Citygate fixed prompt-month prices gained 15 cents to $2.827, while on the West Coast, Malin picked up 14 cents to $2.856.

From a national perspective, the recent rally for natural gas prices has been driven by a combination of fundamental and technical factors, according to analysts at EBW Analytics Group.

“The mid-April cold weather helped to initiate the rally,” and a series of bullish misses from the Energy Information Administration’s (EIA) weekly storage reports “extended gains,” the EBW analysts said. This comes as “production has wavered” and “pipeline exports to Mexico and LNG exports have all surprised to the upside. The fundamentally induced gains helped lead favorable technical patterns to emerge.”

Despite a “mixed” near-term picture for futures prices, there remains “considerable room” to the upside on a seasonal basis even after factoring in recent gains, according to the firm.

“The most-likely injection season trajectory suggests the market may be undervalued by 2.9 Bcf/d,” the EBW analysts said. “Long-term modeling through next winter implies that, even after the recent Nymex rally, the market remains undersupplied by close to 1.0 Tcf over the next 11 months in the most likely scenario.”

Recent projections on Lower 48 balances from Energy Aspects showed zero triple-digit weekly storage builds for the month of May.

“This is not historically unusual, as May 2018 only had one such build, and 2016 and 2017 had none,” the firm said in a note to clients. “…Our recent alerts have generally focused on the amount of demand growth available for the market this summer, compared to last year’s market centered on the degree of demand destruction.”

Aside from weather, scheduled maintenance on the Columbia Gas system, Mexico cross-border flows and the extent of LNG capacity utilization could all potentially swing balances in May, according to Energy Aspects.

Recent readings on power burns showed no signs of impact from higher physical prices, a trend the firm attributed to “lower renewable output in recent weeks and lengthier unplanned nuclear outages, refuels and the ramp-down of Indian Point 3. As load begins to increase” alongside cooling degree days in the weeks ahead, “more of the gas fleet will be called online, tightening balances.”

Meanwhile, looking upstream, North American drilling activity has been on a clear uptrend in 2021, recovering from 2020’s Covid-induced contraction.

“U.S. activity levels have continued their rebound in the last month, with 26 rigs added,” the firm said. “The most notable changes occurred in the Midcontinent (up 12 to 41), Gulf Coast (up seven to 65) and Ark-La-Tex (up six to 60).”

The explanation behind these changes is a simple one, according to Enverus.

“More operators are drilling wells,” the firm said. “In the Midcon, 34 companies are active, compared to 22 a month ago. Active Gulf Coast operators increased by five to 47, and Ark-La-Tex drillers rose by two to 25. In the Gulf Coast, Hilcorp has ramped to two rigs after a seven-month hiatus. Gulfport Energy is running a rig in the Midcontinent for the first time in five months.

“For operators that were already active, increases of note include Chesapeake Energy. The company increased to a three-rig program in the Haynesville Shale after averaging two for the last three quarters and is running a rig in the Gulf Coast for the first time in 10 months.”

The Enverus rig numbers gel with comments that oilfield services executives shared during the latest round of quarterly earnings conference calls.

“More and more green shoots are emerging in the oilfield, particularly in Wellbore Technologies and particularly in North America,” NOV Inc. CEO Clay Williams told analysts Wednesday. “Although we still face headwinds in many markets, our confidence continues to mount that the worst is behind us.”

North American activity has been solid since the start of the year, according to recent comments from Schlumberger Ltd. CEO Olivier Le Peuch.

“We see sustained activity growth in U.S. land,” with a “seasonal rebound” across North America, “particularly in work construction,” the executive said. “Our new mix and sizable explosion in the North American market will increasingly contribute to our results.”

“Shale operators have a larger portfolio of economically viable projects. As a result, the average U.S. land rig count grew 27% sequentially in the first quarter, outpacing the growth in completed stages,” Miller said.

“We still expect the majority of our customers do remain committed to a disciplined capital program this year, but what we are seeing today solidifies our confidence in a steady activity cadence for the rest of the year as operators work to maintain their productive capacity.”