Soaring premiums along the West Coast and deep discounts for the rest of the Lower 48 produced a week of varied price action for regional natural gas forwards during the Dec. 1-7 trading period, NGI’s Forward Look data show. 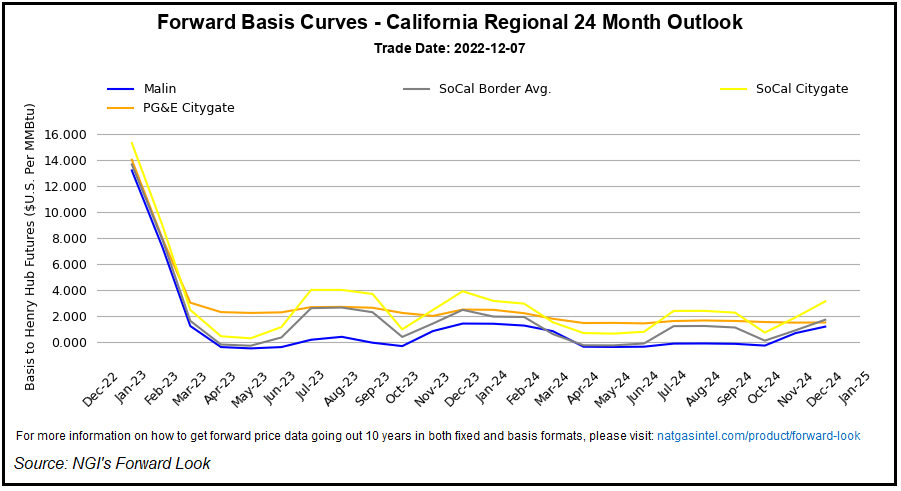 Amid reports of a curtailment in volumes flowing through Gas Transmission Northwest’s (GTN) Kingsgate location along the U.S./Canadian border, Pacific Northwest prices raced higher during the period. Northwest Sumas January fixed prices jumped $5.991 to $20.586/MMBtu, while Malin surged $6.122 to $18.909.

Points farther south saw gains of a similar magnitude, including at PG&E Citygate, where January fixed prices picked up $5.923 to reach $19.729.

Earlier in the week, Wood Mackenzie notified clients of maintenance on GTN’s system scheduled between Tuesday (Dec. 6) and Thursday (Dec. 8) that had the potential to impact up to around 300,000 MMBtu/d of volumes flowing through Kingsgate.

The tighter conditions on the GTN system coincided with supportive regional forecasts. Updated maps from Maxar’s Weather Desk as of Thursday showed below and much below normal temperatures blanketing large swaths of the western Lower 48 throughout the 15-day projection period.

The forecaster predicted a “steady” round of unseasonable chills for the West during the six- to 10-day (Tuesday through Dec. 17). For the 11- to 15-day (Dec. 18-22), the forecast featured “a widespread coverage of below normal temperatures, being most anomalous from the West to the North-Central, with much to strong belows.”

“Strengthening West Coast gas prices have been topical as of late, with the Pacific’s 9 Bcf outsized draw further pressuring pricing,” analysts at Tudor, Pickering, Holt & Co. said in a note to clients Friday.

In fixed price terms, the rest of the Lower 48 saw little of the bullishness displayed by Western hubs during the Dec. 1-7 period. Henry Hub January fixed prices tumbled $1.212 week/week to $5.733.

Disappointing weather-driven demand to open December helped drive heavy selling for Nymex futures for much of the Dec. 1-7 period. Prices dipped below $5.50 — about a $2 discount versus pre-Thanksgiving levels — before bouncing higher with a 25.4-cent rally in Wednesday’s session.

ICAP analyst Brian LaRose in a note to clients questioned whether Wednesday’s price action represented “more serious bottoming action” or if it was merely a “relief rally for a minor, short-term overextended condition.”

To confirm January prices have carved out a more durable bottom, bulls need to ”promptly start chipping away at the ratio retracements associated with the $7.604/8.177 highs and get back above the 22 day moving averages,” LaRose said. “Forced to treat any near-term congestion/strength as a pause in an ongoing down trend otherwise.”

The January contract continued to build on the midweek momentum in Thursday’s trading and into Friday’s session. The front month gained 23.9 cents before rallying another 4.4 cents to settle at $6.245 Friday.

After weather largely failed to deliver from a natural gas demand standpoint in the first half of December, recent forecasting as of Thursday teased a more promising temperature outlook heading into the last two weeks of 2022.

“Arctic air over Western Canada is expected to advance aggressively” across the Lower 48 late in the upcoming work week and extending through Dec. 22, delivering frigid low temperatures, including in the 20s and 30s over southern portions of the country, according to NatGasWeather.

A colder pattern could potentially extend into the final week of 2022, the firm said.

“It will need to if a sustained weather-driven rally is to be expected. But for now, the weather data remains cold enough Dec 16-22 for a bullish interpretation,” NatGasWeather added.

Still, recent weather model performance raised doubts over the extent of upcoming cold, as forecasts had previously teased a much chillier outlook for the first half of December before ultimately trending warmer, according to the firm.

“As such, we need to be careful the weather data doesn’t flip back warmer in coming runs since it would likely result in a violent negative reaction if it were to do so,” NatGasWeather said.

Meanwhile, in another potential wrinkle for domestic natural gas markets tethered to global dynamics by LNG exports, winter demand in Europe has shown signs of heating up to start the month of December, according to Rystad Energy.

“European temperatures have continued to decline in the first week of December,” driving up weekly storage withdrawals and pushing the continent’s liquefied natural gas imports to “record high levels,” according to Rystad analyst Zongqiang Luo.

As of Monday, the UK’s NBP (aka National Balancing Point) benchmark was trading around 40% above early November levels, the analyst said.

“Gas-fired generation is responsible for about 40% of the UK’s power output,” Luo said. “Gas use in the power sector has been on the rise due to low wind speeds across the UK this year and a recent drop in temperatures, which is pushing up power demand. The UK has surpassed Italy in having the most expensive power in Europe, with prices up 121% week/week.”