Broadly, September basis prices around the country during the first week of August were flatter than a pre-Columbus map of the world. Changes in regional market dynamics just couldn’t supply enough steam to get basis prices to shift. 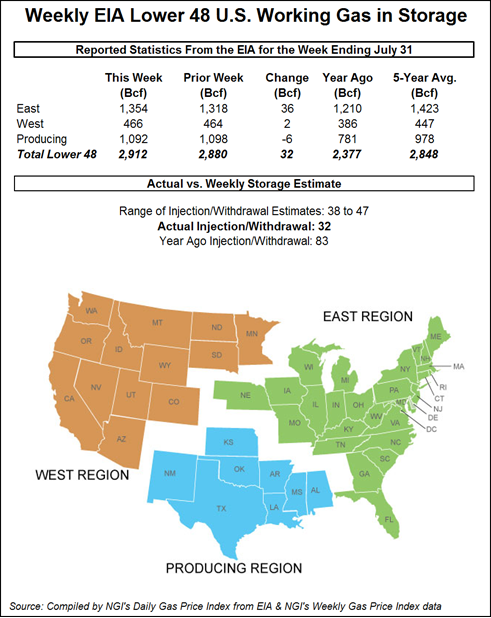 While there were some gains and losses nationally, most were to the tune of just a couple of cents. Nothing moved much more than the nickel-size decline at Dominion South where basis fell from negative $1.522 to negative $1.577 between Friday (July 31) and Wednesday (Aug. 5) trading.

“This rise may be related to anticipation of a bullishly low storage injection,” according to NGI markets analyst Nathan Harrison. “If that was what the market expected it is certainly what it got.”

In fact, the new storage figures released by the Energy Information Administration (EIA) for the week ending July 31 showed an injection of just 32 Bcf, which was well below the industry’s range of estimates that had called for an injection of between 38 and 47 Bcf. During the same week last year 83 Bcf was injected into Lower 48 underground storage caverns, and the five-year average build for the week was 53 Bcf.

The producing region, comprised of the states from New Mexico across to Alabama and up to Oklahoma, earned special mention this week posting a withdrawal of 6 Bcf and largely accounting for the miss in the Lower 48 injection figure, according to Harrison.

Prices in this region showed some light gains beyond those of the underlying futures contract. The fixed price of September gas at NGPL TexOk rose 9.3 cents and Panhandle Eastern rose 10.5 cents over the course of Friday through Wednesday trading.

“Since the Hub itself resides in the producing region it makes sense that anyone speculating on a bullishly low injection would just place their bet in the futures market where liquidity costs are the lowest,” Harrison added. “This might explain the screen’s lackluster reaction to the bullish injection report. Futures traders were already expecting this one.”

Traders certainly weren’t too excited about storage injection data coming in well below analyst estimates, and at the close Thursday, September natural gas futures had added a miserly 1.5 cents to finish at $2.813, and October had gained 1.4 cents to $2.835.

The market response to the EIA storage report showing a 32 Bcf injection wasn’t quite as weak as the nearly 10-cent drop in September futures a week ago, when a reported 52 Bcf build hit trading screens, about 2 Bcf below expectations, but it was out of character nonetheless.

Heading into Thursday’s report, IAF Advisors of Houston calculated an increase of 39 Bcf, and Genscape was looking for a 40 Bcf build. A Reuters survey of 27 traders and analysts revealed an average 42 Bcf with a range of 38 to 47 Bcf.

“It was a half-hearted rally that failed against $2.83, which is the next resistance level,” said a New York floor trader. “If the market gets below unchanged, I think it will test $2.78.”

Tim Evans of Citi Futures Perspective said, “the 32 Bcf net injection for the week ended July 31 was clearly below the 42 Bcf expectation and bullish relative to the 53 Bcf five-year average as well. There were no reclassifications of gas or other adjustments mentioned in the report.”

Inventories now stand at 2,912 Bcf and are 535 Bcf greater than last year, and 64 Bcf more than the five-year average. In the East Region, 36 Bcf was injected, and the West Region saw inventories increase by 2 Bcf. Stocks in the Producing Region fell by 6 Bcf.