The natural gas market returned from Thanksgiving seemingly ready to pull the plug on winter. 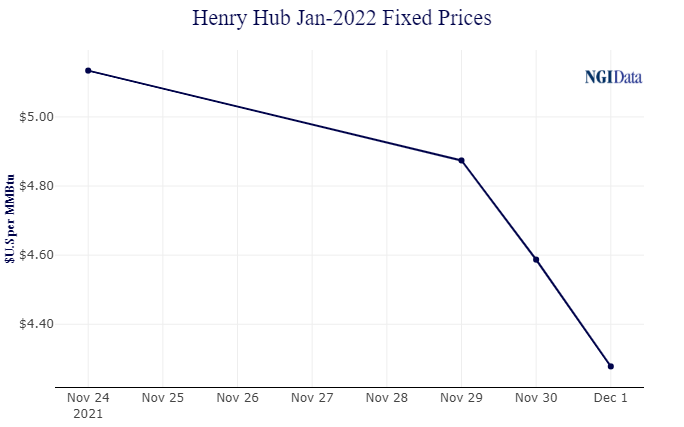 Lofty prices overseas and the prospect of needing to price out U.S. liquefied natural gas exports to preserve domestic supply had driven Henry Hub to new heights in the lead-up to winter. However, so far the kind of space heating demand needed to trigger the more precarious scenarios laid out in the pre-winter period have failed to materialize.

Left to continue waiting for signs of more intimidating cold to arrive, the natural gas market showed its impatience during the Nov. 24-Dec. 1 time frame. After a lofty rally into the December contract expiration, Nymex futures subsequently dropped like a hammer.

After settling near $5.50 on Nov. 26, the January contract finished Thursday’s trading at $4.056, a dizzying swing in only a matter of days. Friday saw a modest paring of the week’s losses, with the front month adding 7.6 cents to settle at $4.132.

The magnitude of the move lower partly reflected the reversal of gains triggered by the final settlement of the December contract, according to EBW Analytics Group senior analyst Eli Rubin.

The EBW analyst cautioned, however, that futures could see a “short-term relief rally” in the days ahead as traders holding short positions potentially “take profits from the tremendous downswing in prices.”

Looking further out into the heating season, however, a downward trajectory in natural gas prices appears likely, Rubin said.

By mid-to-late winter, “downward pressure is set to resume — albeit at a far less torrid pace than the past week — with a rising end-of-winter storage trajectory approaching 1,600 Bcf,” he said. “The March contract could eventually trade sharply lower and likely even eventually fall into contango” relative to the April contract.

Even after tumbling more than a dollar during the first three days of the post-Thanksgiving work week, futures continued to slide Thursday as the market didn’t seem to have found a bottom.

The European modeling “showed a very warm pattern look late in the run, which would carry beyond the middle of December,” the firm told clients.

Amid a “sea” of much milder than normal temperatures in the pattern, Bespoke said it would expect the psychological $4.00 barrier to be broken by early in the upcoming week.

“This is not ‘winter over,’ but just means that, in the near term, things could move uglier before any chance to get better toward the end of the month,” the firm added.

ICAP Technical Analysis analyst Brian LaRose pointed to $3.984 down to $3.949 as the area containing the “next big cluster of support candidates” for the January contract. The front month settled below a “minor level of contention” at $4.133 on Thursday.

“Natural gas prices may face headwinds from the Covid-19 Omicron variant and doubts over vaccine efficacy, which is causing a pullback in energy commodities worldwide, but bullish factors are still at play as temperatures drop and the saga of European supply uncertainty continues,” Ramesh said.

Dutch Title Transfer Facility prices have found support from forecasts showing below-normal temperatures in Europe and lean storage levels for the continent, according to the analyst.

“Storage levels are down 4% from last week and assuming a five-year average depletion profile between now and end-March 2022, storage levels may start April 2022 at a very low 21% of notional capacity,” Ramesh said.

Still, there’s a chance the situation could grow even more dire overseas.

“European storage risks drastic depletion to around 12% of the notional capacity by April 2022 if we consider a depletion profile similar to earlier this year, which may happen if the winter continues to be severe, wind generation fluctuates, and substantial additional supplies from Russia are not forthcoming,” Ramesh added.

Even with the mild weather moving into December, the domestic natural gas market cannot afford to relax given a backdrop of elevated global prices, according to the analyst.

“We are now firmly into the withdrawal season, and storage depletion may accelerate if the weather takes a turn for the cold and residential heating demand increases sharply,” Ramesh said. Prices above $30/MMBtu in Asia and Europe “continue to provide a significant source of competing demand for exports. Therefore, despite a significantly improved domestic balance, the U.S. market cannot rest easy that supply for its own consumption will always be sufficient until international prices have adjusted downwards.”

Looking at regional fixed price trading in the forwards market, week/week declines of around 70 cents to $1 were the norm throughout the Lower 48, consistent with the deterioration in Henry Hub pricing.

In terms of basis shifts during the Nov. 24-Dec. 1 time frame, the continued mild temperatures in the forecast accompanied easing premiums along the East Coast.

NatGasWeather on Thursday was calling for a “modest increase” in national demand for early next week amid frigid temperatures moving into the Midwest and Northeast.

However, the midday Global Forecast System model run continued to show a “warm ridge building over the southern and eastern U.S. Dec. 10-17,” according to NatGasWeather.

The pattern during this time frame “remains solidly bearish,” and “much colder trends would be needed or the 16-20 day forecast period will continue with bearish headwinds,” the firm added.