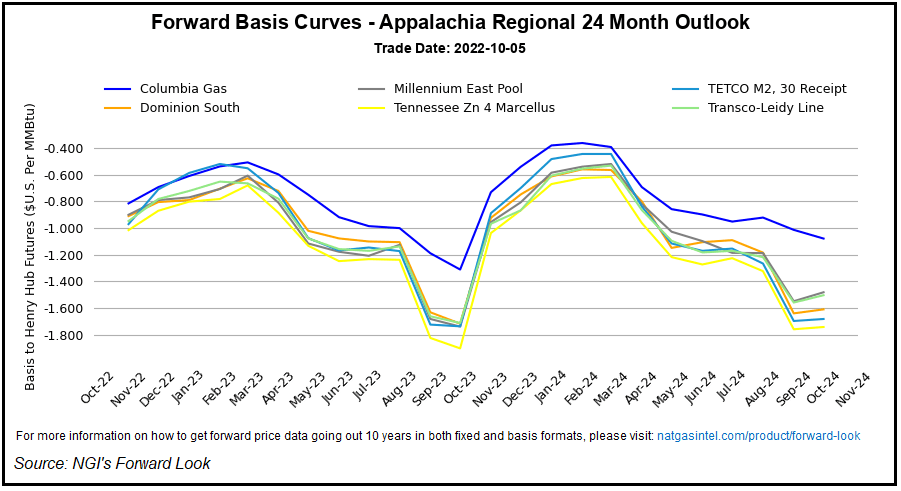 Despite a small discount at benchmark Henry Hub, which shed 3.0 cents to $6.935/MMBtu, prices for November delivery climbed at a number of demand hubs. Strengthening in November basis differentials was widespread, including trading locations in the Northeast, Appalachia, Midwest and Rockies.

In New England, Algonquin Citygate basis climbed to plus $4.138 for November delivery, a 16.1-cent swing higher for the period.

In the Midwest, Chicago Citygate basis added 14.8 cents for November, ending 37.6 cents back of the national benchmark.

Out west in the Rockies, Cheyenne Hub narrowed the gap to Henry to minus 65.3 cents, an 11.7-cent gain.

Why Are Bulls ‘Buying The Dip’?

Meanwhile, after selling off sharply in recent weeks, Nymex futures showed signs of establishing a shoulder-season bottom during the period, a stretch that notably included a 36.7-cent rally in Tuesday’s session.

Traders shrugged off a hefty triple-digit storage build on Thursday to push the November contract another 4.2 cents higher to $6.972, just shy of the $7 mark.

The print far outpaced the 87 Bcf five-year average, pushing stockpiles to 3,106 Bcf and cutting the year-on-five-year deficit to minus-7.8% as of Sept. 30, EIA data show.

Storage builds over the next few weeks, though, are poised to shrink the deficit to the five-year average, the analyst said. This coupled with a “lack of cold weather may postpone attempts for Nymex gas to breakout to the upside.”

NatGasWeather said next week’s reported build “could be even larger than today’s, potentially climbing into the 130s Bcf.” With domestic production reaching record highs, “the supply/demand balance isn’t as scary as market participants were looking at a few months ago.”

And yet, “this hasn’t stopped bulls from again buying the dip,” the firm added.

The recent move higher might reflect technical or seasonal factors, or it might reflect “expectations U.S. and global supplies will tighten considerably this winter season,” NatGasWeather said.

Those holding such supply adequacy concerns “must be looking forward” given that “U.S. supplies will have increased more than 600 Bcf in just six weeks, smashing the previous fall shoulder season injection record,” NatGasWeather added.

Looking overseas, with winter approaching in the northern hemisphere, natural gas markets in Europe have reason to feel “snug but by no means cozy,” according to a recent note from Rystad Energy vice president Emily McClain.

As for Asia, with high storage levels “expected to last through December, most market focus has now shifted to January LNG imports,” McClain added.

Wood Mackenzie reported a number of pipeline events impacting the Permian region during the period, including a force majeure on the El Paso Natural Gas (EPNG) system on its Line 1300 that was expected to impact roughly 180,000 MMBtu/d of flows.

EPNG was also scheduled to reduce westbound flows on its Line 1100 for maintenance starting Monday and continuing through Oct. 21, according to the firm.