Natural gas forward market trading got off to a choppy start in February as fundamentals barely budge, with persistently warm weather continuing to bump up against lower production and strong exports. 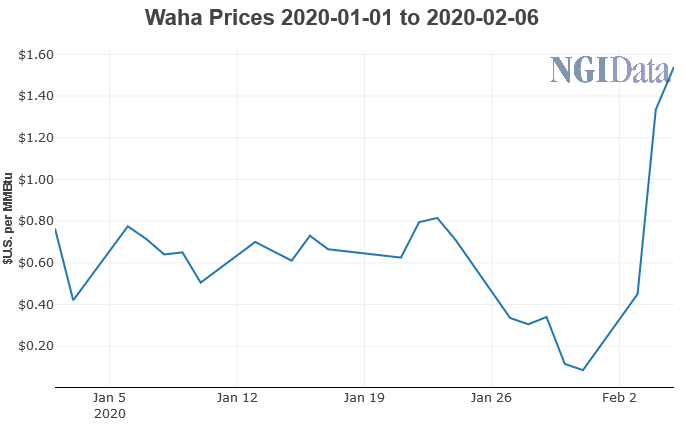 Forward prices for both the March and April contracts averaged 2 cents higher from Jan. 30-Feb. 5, while the summer strip (April-October) fell a penny on average, according to NGI’s Forward Look. The winter 2020-2021 strip (November-March) was down an average 2 cents.

“The front of the curve continues to rhyme with the pricing dynamics seen in 1Q2016,” Mobius Risk Group said. “When a pricing inflection point will be reached remains in question, and in the meantime, supply and demand balances continue to tighten.”

To be sure, the natural gas market has several factors working in its favor. Production remains well off late-November highs and as of Friday, sat at just 90.0 Bcf, according to Bespoke Weather Services. However, the firm noted that some of the decline is likely because of temporary freeze-offs.

Although clearly overshadowed by ultra-warm weather for winter, it appears that core fundamentals may have tightened by 4.5-5.0 Bcf/d over the last three months, a constructive sign for the 2020 injection season, according to EBW Analytics Group.

However, weather always rules in the gas market, and this winter has failed to produce the level of demand needed to support prices. Instead, the balmy winter has helped to drive a once hefty 700 Bcf-plus storage deficit to an impressive overhang to both year-ago levels and the five-year average.

On Thursday, the Energy Information Administration (EIA) reported a 137 Bcf withdrawal from storage inventories for the week ending Jan. 31. Although the figure was viewed as among the tightest of the season to date, it was dwarfed by last year’s 228 Bcf withdrawal for the similar period.

An ever tougher pill to swallow, the EIA’s reported 137 Bcf draw expanded the year/year overhang to a whopping 615 Bcf and the surplus to the five-year average to 199 Bcf.

With weather-driven demand outlooks having fallen for nine consecutive weeks, expected demand has been reduced by a cumulative 349 gas-heating degree days and 573 Bcf, according to EBW. Traders, rightfully, are taking a cautious approach when it comes to the latest weather data.

The European model made major revisions to its outlook in several of its latest runs, as did the American Global Forecast System (GFS) model. The latest GFS model shaved a few heating degree days (HDD) off the 16-day total, turning a little colder for the Feb. 13-14 period with a fairly strong cold shot forecast to impact the Great Lakes and Northeast, according to NatGasWeather. However, the model was milder for Feb. 17-19 by seeing a stronger/milder break set up over the South and East. Another glancing cold shot was favored by the GFS for Feb. 20-22, but far from frigid without the cold pool shifting farther south.

“It’s important to consider the weather models have been inconsistent all week, flip-flopping between colder and milder trends as they struggle to determine exactly how much frigid air over Canada will push across the border” late this week and beyond, NatGasWeather said. “But the Feb. 14-20 pattern is still better than recent weeks, providing better opportunity for weather to take advantage of a tighter supply/demand balance.”

Looking ahead to early spring, EBW said nonfundamental indicators are likely to play a key role over the next month or so.

On the demand side, there may be less coal-to-gas switching potential than widely recognized at sub-$2.00/MMBtu pricing, as coal plants need to stay online for reliability reasons, according to EBW. Further, global LNG demand may remain high enough during the heating season to keep feed gas demand at record levels.

On the supply side, producers line up an exhaustive planning schedule months in advance, and often require months to change their production trajectory, EBW said. “In short, aside from near-term weather forecasts, fundamental response to multi-year lows in natural gas prices will likely take time to play out. As a result, market sentiment and technical trading will likely have an increased role in near-term price movements.”

There are some risks, however. The coronavirus is wreaking havoc in energy markets across the globe as uncertainty mounts over the potential demand destruction the outbreak could cause. Goldman Sachs Commodities Research analysts in a note to clients late Wednesday said the narrowing spread between the Japan Korea Marker (JKM) and Dutch Title Transfer Facility (TTF) reflects the market’s concern that the outbreak will significantly lower Asian demand for LNG and, as a result, greatly increase the excess supply in the market. The Goldman analysts, led by Samantha Dart and Damien Courvalin, also noted that the arbitrage window for U.S. LNG exporters also has narrowed.

The reduction in the LNG import forecast comes as China National Offshore Oil Corp. declared a force majeure amid the outbreak, meaning the LNG buyer is rejecting some contracted shipments as efforts to contain the coronavirus disrupt shipping traffic and demand. Both Total SA and Royal Dutch Shell plc rejected the force majeure, but Total’s Philippe Sauqet, who heads the Gas, Renewables and Power segment, said that if a longer-term situation arises in which LNG cargoes can’t be offloaded at Chinese terminals because of the virus, Total could reassess because then “there might be a real case for force majeure.”

As global prices weaken, Nymex futures may need to remain weak to maintain the 10 Bcf/d of feed gas demand expected once the third production units at the Freeport and Cameron LNG terminals enter service, according to EBW. Sub-$2.00/MMBtu by late summer remains plausible, particularly if speculators dramatically expand short positions, “but falling production and the potential for even modest shut-ins to rebalance global markets may support futures.”

Although a storm system was heading toward the Northeast this weekend, a return to more moderate temperatures in the coming week helped send regional forward prices cratering during the Jan. 30-Feb. 5 period.

A potential foot or more of snow was expected to fall by Friday in the Northeast, while icing was expected to be problematic from central Pennsylvania to southern Maine, according to the National Weather Service. But while the frigid air lent support to some cash markets on Friday, forwards prices reflected the much milder long-term outlook.

“Iroquois imports gas every day in winter, most days in peak summer and less during the shoulder seasons, but there have been no months in which Iroquois did not receive at least some gas from Canada — although May 2019 came close with only one day of imports,” RBN analyst Lindsay Schneider said in a recent blog.

That would change if Williams’ proposed Constitution Pipeline were to be built, but regulatory delays and public opposition have kept the project from moving forward. Even though gas on Iroquois is higher priced than gas supplied via other points in the area, the overall gas price environment still makes the Cricket Valley power plant economical, according to RBN.

RBN expects the plant to run as baseload-type generation, or nearly year-round rather than only during periods of high power demand. Based on gas requirements for similar combined-cycle gas turbines, the firm estimated it would increase the number of days that Iroquois imports gas from Canada to about 80% of the year, from 65% in 2019.

“There would also be some upside if the summer is particularly hot, but no real winter upside as Iroquois already imports gas on all winter days,” Schneider said. “The increased summer usage would further decouple Iroquois prices from the rest of the Northeast and make Iroquois even more of a premium pricing point in the area.”

Though area production continues to run strong, a cold front moved into the area and lifted demand, according to Genscape Inc. Pipeline nominations for Wednesday were revised down by 0.8 Bcf/d, a revision likely because of a spike in demand rather than freeze-offs.

“There is a decent amount of local load on intrastate systems that, when elevated, results in gas not showing up on the visible interstates,” Genscape senior natural gas analyst Rick Margolin said.

Lows in Lubbock, TX, dipped into the teens midweek and are forecast to remain below freezing through Monday. However, with a quick return to milder conditions, forward prices remained soft.

Waha March prices rose only a penny from Jan. 30-Feb. 5 to average minus 10.2 cents, according to Forward Look. Negative prices were seen through May, while the full summer strip averaged 7 cents after falling 8 cents on the week. Winter 2020-2021 prices were down 1 cent to 77 cents.

The sub-zero price environment for Permian prices comes as associated gas production continues to swell with oil output rising at the same time that uncertainty builds around relief of gas takeaway constraints.

Genscape is forecasting Permian gas production will blast through the 14 Bcf/d mark, but not until the back half of the year as gas takeaway constraints keep a lid on near-term growth.

Last quarter, the cross-Texas Permian Highway project’s in-service date was delayed, and this week a lawsuit against the project was announced.

“We expect the Wahalajara project that will increase Permian-to-Mexico flows will come online next month, but that project is also at risk of delay, and there remains ambiguity around how much that project will be capable of flowing,” Margolin said.

Unlike on the gas side, oil growth has been enabled by infrastructure enhancements with the Cactus II pipeline entering full service in 2019; Epic and Gray Oak beginning partial service in 2019 with expected ramp-ups in 2020; and new in-service of the Jupiter and Wink-to-Webster systems at the end of this year, Margolin said.