Coming off a sharp surge from the prior week, natural gas forwards sputtered a bit during the July 9-15 period as spiking coronavirus cases across the United States threatened continued economic and energy demand recovery, according to NGI’s Forward Look. 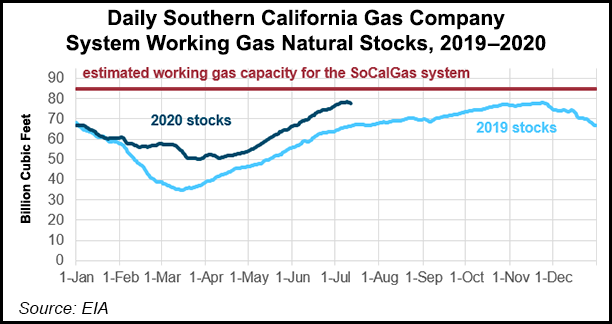 Meanwhile, higher oil prices have incentivized producers to return to the oil patch, resulting in a rebound in associated gas volumes at a time when export demand remains weak. However, with record heat seen persisting across much of the Lower 48 into early August, the tug of war among competing market drivers ultimately left forward prices largely unchanged week/week.

Nymex natural gas futures set the tone for the six-day period, with the August contract making its biggest move on Monday when it fell 6.6 cents after previously hotter weather outlooks shifted less intense over the weekend. From there, the prompt month attempted to crawl back toward the coveted $1.80/MMBtu mark, helped in part by liquefied natural gas (LNG) demand recovering from recent lows and Mexican exports setting fresh highs.

However, with so much uncertainty still looming around the Covid-19 pandemic, and low global export demand seen continuing for another couple of months, futures failed to budge across the curve, with the Nymex winter 2020-2021 strip putting up the largest gains of only about 2.0 cents from July 9-15. As of Wednesday, the August contract sat at $1.778, the balance of summer (August-October) stood at $1.855 and the winter 2020-2021 (November-March) was at $2.723.

Any further gains may prove fleeting, though, as the market eyes end-of-season storage totals with caution, according to EBW Analytics Group.

Indeed, swelling gas inventories across the Lower 48 have quickly sapped any price momentum in the gas market. With stocks entering the traditional injection season already well above historical levels, the Energy Information Administration’s (EIA) weekly storage inventory reports have been highly scrutinized over the past couple of months. After a strong start to the injection season brimming with triple-digit builds, the latest EIA data has reflected a much tighter supply/demand balance.

On Thursday, the EIA reported a 45 Bcf injection into Lower 48 stocks for the week ending July 10. The latest figure compares with a 67 Bcf storage build in the same week last year and the five-year average injection of 63 Bcf. This was the third week in a row that the EIA reported a build of less than 100 Bcf.

Ahead of the EIA report, estimates in a Bloomberg survey ranged from 38 Bcf to 50 Bcf, with a median of 47 Bcf. A Reuters poll showed a low estimate of 34 Bcf and a high of 52 Bcf, with an average of 47 Bcf. NGI estimated a 49 Bcf injection.

Market observers on The Desk’s online energy platform Enelyst pointed out that scorching summer weather was driving demand across the country, particularly in the South Central region, where strong power generation from wind and solar were no match for natural gas. Salt facilities in the region withdrew 5 Bcf for the week ending July 10, 1 Bcf more than the prior week.

Enelyst managing director Het Shah, however, quickly noted that salt withdrawals continued until the end of August last year, totaling 32 Bcf from the same week last year through Aug. 30. A similar trend this year would take salt inventories down to around 330 Bcf. “Nothing too interesting there.”

That’s not to say it’s not a scorcher. Bespoke Weather Services said weather models have backed off the intensity of the heat for the next couple of weeks, but the pattern is still a hot one, consistently running above normal even with the cooler trends as things progress forward.

“It is not a bearish pattern by any means. It is simply a case of models shooting too high in the medium range, even in this hotter regime. We do expect heat to continue as we move into August,” the firm said.

Given the sweltering conditions, Enelyst participants were surprised the EIA’s below-average storage build failed to inspire any sort of rally. Instead, after briefly spiking a couple of cents, the August Nymex contract plunged to an intraday low of $1.703 before going on to settle Thursday at $1.723, off 5.5 cents day/day.

“I can’t believe a non-bearish number caused the market to puke again,” said an Enelyst participant.

On the export front, LNG demand was back above 3.6 Bcf/d on Thursday, off lows of only 2.92 Bcf/d a week ago, which is a “hopeful sign for bulls,” according to EBW. Near term, it may help maintain the market’s focus on the sweltering heat.

However, EBW pointed out that during June, LNG cargo loadings during the last week of the month averaged 4.5 Bcf/d, or 0.5 Bcf/d higher than the first half of the month. Timing differences are likely to simply have been an aberration, it said, or a response to ultralow Henry Hub spot prices in late June.

“Still, it is possible that exporters were loading gas to be sold against July benchmarks abroad and modestly bolster contract spreads. If the latter, the possibility of stronger loads in late July may be a further modest bullish factor for Nymex futures.”

The world’s appetite for LNG is far from normal. European storage inventories were at about 82% of capacity last week and are expected to fill by the end of the injection season. Inventories also are high in Asia, which has kept prices depressed and spot activity subdued.

Bloomberg New Energy Finance (BNEF) has estimated that low European prices in particular could cut 19 billion cubic meters (Bcm) of U.S. LNG exports between the second and third quarters, or roughly 45% of U.S. export capacity. EIA said in its latest Short-Term Energy Outlook that 110 U.S. cargoes were canceled for June-August lifting. Meanwhile, BNEF says up to 140 cargoes could be canceled in the third quarter.

Export demand is faring much better south of the border. Mexican exports were revised to a new high of 6.45 Bcf on Wednesday, fueled by increasing power burns that, although tracking below last summer’s record pace, are continuing to increase with economic recovery taking place in Mexico amid the coronavirus.

Though the vast majority of gas markets across the United States hardly budged during the July 9-15 period, Southern California prices were an exception.

The weakness at the front of the curve reflects growing storage inventories in the region along with a decline in gas consumption, according to EIA. Southern California Gas Co. (SoCalGas) inventories as of July 12 were up 11.4 Bcf, or about 17%, compared with one year ago.

The swelling stocks have been the result of a 2% decline in average gas consumption in the region so far in 2020, according to EIA. Although temperatures in Los Angeles are tracking about 3% warmer year/year, the increased availability of natural gas capacity in Southern California has contributed to less reliance on storage operations to meet demand, it said.

Another big mover across the Lower 48 was Texas Eastern M-3 in Appalachia, which continued to post substantial gains across the curve as the pipeline operator provided timelines for a return to service of several parts of the 30-inch diameter system.

Enbridge Inc. last week said Texas Eastern Transmission (Tetco) would return to service Lines 10, 15, and 25 for various segments and remediation types along the system, restoring M2 export capacity on two major corridors: eastbound to M3 through Uniontown and southbound to the Gulf Coast.

The 1.75 Bcf/d constraint from Berne to Uniontown, which is the largest and most significant restriction, is anticipated to return to its full capacity of 4.33 Bcf/d by mid-October, Genscape Inc. said in a note to clients. The southbound 30-inch diameter system is then divided into two segments — Berne to Tompkinsville and Tompkinsville to Kosciusko — with anticipated returns to service (RTS) at the end of October and mid-September, respectively.

“Tetco also has a separate entry for the segment encompassing the incident site from Owingsville to Wheelersburg (return to service late August) and another entry for hard spot remediation along the majority of the 30-inch system (return to service mid-September),” Genscape analyst Josh Garcia said.

He noted that Enbridge made no mention of the incident site of the Danville explosion, which still technically has an active force majeure. However, Tetco and Pipeline & Hazardous Materials Safety Administration “have been treating the 30-inch system as one unit after the Owingsville explosion,” and the last update specific to the Danville force majeure targeted a 3Q2020 return to service, “eliminating potential Northeast volatility associated with these outages prior to the winter,” Garcia said.