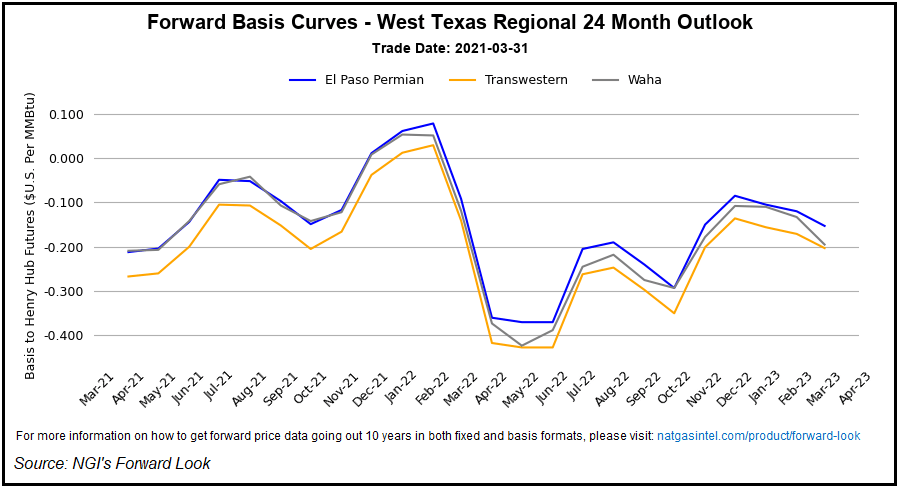 The May contract, which took over the prompt-month position on Tuesday, finished the period ending Wednesday (March 31) essentially flat from where it averaged on March 25, according to NGI’s Forward Look. Similarly stable prices were seen across the forward curves, with most contracts shifting only a few cents in either direction.

The sleepy action in forward markets mirrored what was seen along the Nymex gas futures curve. Mobius Risk Group pointed out that Wednesday’s trading range for the May futures contract was slightly more than 8 cents wide, yet ultimately resulted in only a 1.5-cent change on the day. The Houston-based firm also noted that coincidentally or not, Wednesday’s closing price was right on top of the last trade for the April contract.

Nevertheless, Mobius was looking to the latest government storage data for the next “opportunity for excitement” in the currently stagnant market.

The Energy Information Administration (EIA) pulled off the feat, reporting a lower-than-expected 14 Bcf net injection into natural gas storage and a revision to the prior week’s data.

The revision, ironically reported on April Fool’s Day, resulted in a 32 Bcf withdrawal, rather than a 36 Bcf draw, for the week ending March 19. The change occurred in the nonsalt facilities in the South Central region, where inventories reached 519 Bcf for the period.

The 14 Bcf build for the week ending March 26 prematurely put an end to the withdrawal season that traditionally runs through the end of March. However, traders struggled to make sense of the latest data. May prices ultimately fluctuated in a relatively tight range of less than 10.0 cents throughout Thursday’s session. The contract settled at $2.639, up 3.1 cents from Wednesday’s close.

Given the EIA revision, Bespoke Weather Services said it rated the 14 Bcf injection as a “neutral number.” The firm, which had projected a 22 Bcf build, said better power burns were needed before the market would be ready to begin any sustainable move higher.

However, April weather is shaping up to offer more of the same picture-perfect temperatures. The latest weather models showed some eastern cooling beginning next weekend into the following week, but Bespoke doesn’t expect the pattern to turn much more to the colder side.

“We still favor an overall warmer lean as we move through the back half of the month, but confidence is a little lower,” the forecaster said.

Broken down by region, the EIA said the South Central region added 15 Bcf net into storage, including 11 Bcf into salt facilities and 4 Bcf into nonsalts. Pacific stocks rose by 1 Bcf, while the East and Mountain regions each recorded no change. The Midwest continued to withdraw, pulling 4 Bcf out of inventories.

Total working gas in storage as of March 26 stood at 1,764 Bcf, which is 225 Bcf below year-ago levels and 36 Bcf below the five-year average, according to EIA.

Feed gas volumes to U.S. terminals had steadied above 11 Bcf/d over the past couple of weeks, the firm noted. NGI data confirmed that trend, with feed gas demand holding above 11.8 Bcf on Thursday.

“While any potential reductions would be expected to be brief, lower LNG demand may compound weather-induced weakness and soft industrial demand to lead the spot market lower,” EBW analysts said.

Energy Aspects analysts also noted the impact of spring maintenance on LNG feed gas. The firm was forecasting an average 9.7 Bcf/d of feed gas volumes in April, representing a 1.3 Bcf/d month/month decline from March highs. The bulk of the decline comes from maintenance, which it expects to depress intake to liquefaction terminals by 1.4 Bcf/d below capacity.

“We also have a small allowance for late-season fog, which can delay loadings and back up feed gas if prolonged beyond a day or two,” Energy Aspects said.

Pipelines that serve LNG terminals were slow to list outages that would impact feed gas in April, according to the firm. While train turnarounds are typically not publicly disclosed in advance, interstate pipeline maintenance is.

As of Thursday, the only listed maintenance that would impact LNG terminals in April was a series of works over six nonconsecutive days to the Sinton compressor station. This station is upstream of Cheniere Energy Inc.’s Corpus Christi LNG terminal and could take offline 1.5 Bcf in total, Energy Aspects said. There was no work scheduled for April impacting Cheniere’s Creole Trail pipeline, which feeds the Sabine Pass, LA, facility.

Cove Point LNG in Maryland also had no outages listed on the schedule, according to Energy Aspects. The firm noted that Cove Point typically undergoes two weeks of maintenance in June followed by a three-week full outage in the autumn. It had a small liquefier maintenance listed last spring in advance of June.

“It is unlikely that Cove Point would run for a full year through to late September until going offline for maintenance,” Energy Aspects said. “The typical schedule is for trains to run for six months before going offline for inspections and needed work, which usually peak in April and October.”

In total, the firm forecasts 10.3 Bcf/d of feed gas over the 2021 injection season, or 90% capacity utilization.

There is a chance that maintenance is deferred to later in the injection season in the face of strong global gas demand, according to Energy Aspects. Arbitrage levels to Europe showed U.S. LNG in the money by more than $2.00. “The upside is limited, however, given our already high summer utilization forecast and the need for trains to go down for inspections or else risk equipment damage or unplanned outages.”

Despite the projected headwinds from the weather and exports, EBW analysts said several factors may begin to come to the forefront, likely driving a significant rally for natural gas prices into early summer.

The firm expects the storage deficit to the five-year average to expand, while planned injections by local distribution companies may ignite spot market demand. Forecasts for a hot summer also could start materializing, while the recent slow uptick in industrial demand after February’s cold snap could begin to boom.

In addition to strong export demand, an increasingly vaccinated public is projected to fuel economic growth, and the post-winter bounce in production could fade into modest supply declines, according to EBW.

Though U.S. forward curves posted few gains or losses of more than a few pennies, the winter strip along Permian Basin curves managed to eke out slightly stronger changes further out the strip.

By comparison, the May contract was down a penny to $2.401, while the balance of summer (May-October) picked up 3.0 cents to reach $2.590, Forward Look data showed.

The modestly stronger gains may be an indication of the expected increase in takeaway capacity in the region.

Whistler would have access in South Texas to the Nueces Header and markets at Agua Dulce, as well as along a northern extension through Corpus Christi to the Houston Ship Channel to serve markets along the Texas Gulf Coast.Agua Dulce, a new addition to Forward Look, recorded very small gains along the entire curve for the March 25-31 period.