With the heart of the winter heating season poised to deliver impressive chills for key portions of the Lower 48, natural gas forward prices surged higher during the Jan. 5-12 trading period, though a sharp sell-off for Nymex futures Thursday suggested recent gains may have been overdone. 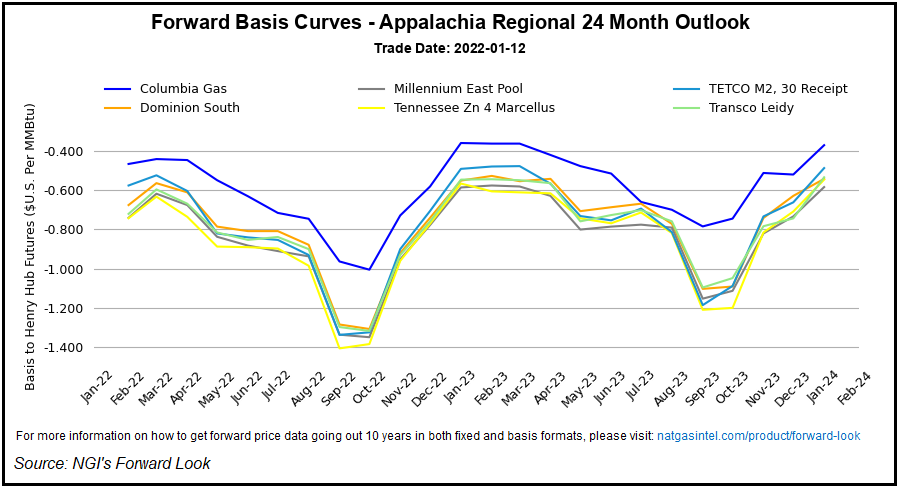 As for February Nymex futures, close observers of recent price action risked a severe case of whiplash. Like a bottle rocket, prompt month futures rallied 60.8 cents on Wednesday only to swiftly crash back down, giving back 58.7 cents a day later to settle at $4.270 Thursday. The February contract went as low as $4.097 in Friday’s session but ultimately held steady day/day, giving up another 0.8 cents to settle at $4.262.

Week/week changes in Forward Look data, captured through Wednesday’s trading, appear to reflect the full force of the bullishness on the day, with the retreat in Nymex prices to close out the work week raising obvious questions of durability.

Data from recent runs of the American weather model Thursday appeared to have traders thinking that forecasts — auguring that Arctic cold will spill into the Lower 48 in late January — had peaked in terms of projected weather-driven demand.

Even so, the European model in recent runs was “impressively frigid Jan. 21-27 as Arctic air becomes established across the northern and eastern U.S.,” the firm said.

Based on the sell-off Thursday, traders may have felt the European model’s outlook had “gotten too cold,” with the model potentially shifting warmer in subsequent runs, NatGasWeather said.

“Some of the data is teasing that the cold will fade” by the end of January into early February, the firm said. “This could disappoint. However, if cold air teases it can linger” during this time frame “in future weather model runs, this could lead to risk on trade ahead of the weekend break.”

The analyst noted heading into Thursday’s session that “the seasonal outlook does not suggest the need for gas prices near $5.00” even as fundamentals remained supportive given production freeze-offs, strong liquefied natural gas exports and upcoming cold.

Run-to-run model shifts aside, the overall temperature outlook clearly offered up enough weather-driven demand to inject some pressure into the buying side of the market and incentivize higher prices for natural gas forwards during the Jan. 5-12 time frame.

In the Northeast, Algonquin Citygates February basis soared to plus-$16.002, picking up $2.156 week/week. In the Midwest, Northern Natural Ventura February basis surged $1.662 to finish at a $3.791 premium to Henry Hub.

Maxar’s updated weather map Thursday showed broad coverage of much-below-normal temperatures over the Midwest and East during the 11- to 15 day time frame (Jan. 23-27).

“A ridge over the eastern Pacific is the primary influence in directing colder air into the eastern half” of the Lower 48, the forecaster said. “Much and at times strong belows are in the Midwest and East, while the South likewise shares in the below and much below-normal coverage, under rounds of high pressure and generally drier than normal conditions.”

Despite surging prices in the Midwest and along the East Coast, hubs in the Appalachian Basin saw widening negative basis differentials during the Jan. 5-12 period, implying supply bottlenecks.

Appalachia added four rigs during the weeklong period ended Wednesday (Jan. 12) to grow its tally to 53, the region’s highest activity level since October 2019, according to Enverus Rig Analytics.

“There are currently 27 companies drilling wells in Appalachia, compared to 16 operators at this time in 2021,” Enverus analysts said. “Fifteen of those companies are running multiple rigs, with Ascent Resources and Tug Hill Operating being the most active at four rigs each.

The Appalachian gains bucked a broader downtrend in domestic drilling activity for the week. Enverus counted a week/week decline of nine U.S. rigs as of Wednesday, down to 696 overall but up 1% sequentially and 72% year/year.

“The largest week/week declines by region were in the Permian Basin (minus nine to 266), Gulf Coast (minus four to 82) and Anadarko Basin (minus three to 64),” Enverus analysts said.