Natural gas forward prices broke free from oil and other commodities during the March 3-9 period, sending prices sliding ahead of an expected warmup next week, according to NGI’s Forward Look. 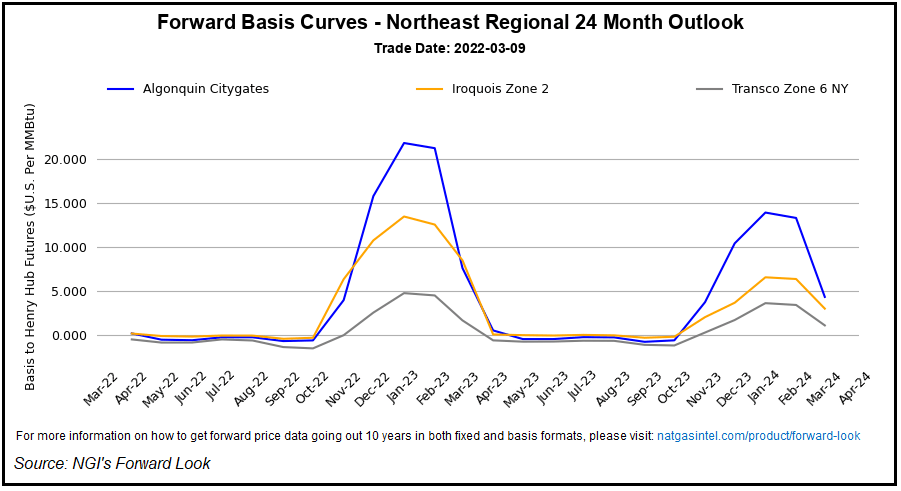 April fixed prices fell an average 20.0 cents during that time, while the summer strip (April-October) came off 14.0 cents on average. Price decreases for the next winter (November-March) recorded smaller losses, an indication that supplies are expected to remain tight ahead of the peak heating season.

After a slow start to the winter, a prolonged stretch of cold weather in January and February quickly drained storage inventories and set up a steep uphill climb for the market in order to boost stocks this summer.

On Thursday, the Energy Information Administration (EIA) said storage as of March 4 stood at only 1,519 Bcf after falling 124 Bcf on the week.

The withdrawal continued to reflect the tight balances that developed at the start of the year when the first winter blast hit the Lower 48. However, Bespoke Weather Services said the market should be careful to not read too much into the EIA figure. Analysts with the firm saw wind generation as quite low during the reference period, but said it would be an outlier compared to the next few weeks.

“We still project end-of-season storage levels to come in above 1.4 Tcf, on the assumption that the next few weeks will be looser,” Bespoke said.

Total working gas in storage as of March 4 was 281 Bcf below year-ago levels and 290 Bcf below the five-year average, according to EIA.

First Injection On The Way?

With warmer weather expected in the not-too-distant future, the market is poised to get a jumpstart on the refill season.

Bespoke said the latest weather models show warmer air taking hold in most key areas of the country after the next few days. The forecaster said March, as a whole, may wind up similar to last March in terms of total gas-weighted degree days (GWDD) – if the warmer pattern persists beyond day 15. However, some models indicate possible cooling around that time.

“Of course, we are heading into the time of year when weather changes will move the needle less and less, in terms of overall market impact,” Bespoke said.

EBW Analytics Group noted that independent forecaster DTN’s outlook features only 99 GWDDs, 14 below normal, for the storage week ending March 24. At the same time, production may rise by an estimated 0.5 Bcf/d seasonally from current levels. This sets up the potential for the first injection of the season.

“While forecasts can change rapidly, if an early end to the withdrawal season draws nearer, downward pressure on the front end of the Nymex forward curve is likely,” EBW senior analyst Eli Rubin said.

The analyst noted that further gains in production are likely in the coming weeks as well. Although the current cold snap appears to have slashed output by a couple of Bcf, pipeline flow monitors suggest March production so far is up over the average supply for the back half of February. As freeze-offs fade, EBW expects output to reach early-December levels later this month, however, a lackluster seasonal supply rebound-to-date may indicate lower production to start the injection season.

Longer term, EBW said the market may have to contend with a larger-than-expected decline in seasonal demand, along with maintenance at various LNG facilities and stronger wind generation that could further dampen gas demand. At the same time, stronger precipitation in the Pacific Northwest could be a boon for spring hydropower generation, while production edges higher. By mid-April, however, local distribution companies (LDC) should pick up the pace on injections, boosting demand and putting a floor under Nymex futures prices, according to EBW.

“LDCs represent price-inelastic demand,” Rubin said. “Their overarching raison d’etre is to ensure adequate supplies such that nobody freezes to death even in a frigid winter. With U.S. natural gas markets pricing in shortage risks last winter and acutely felt shortages ongoing across the pond in Europe, LDCs are likely to aim for a strong refill season to avoid potential complications next winter.”

Notably, these projections are based on fundamentals, and the wave of headlines from Ukraine “can rapidly swing market sentiment,” Rubin said.

Algonquin Citygate April basis dropped 26.0 cents from March 4-9 to reach plus 18.6 cents, according to Forward Look. May basis, meanwhile, tacked on 8.0 cents to reach minus 52.9 cents. Fixed prices for the summer averaged $4.240 after falling 18.0 cents through the period, but the winter strip picked up 24.0 cents to average $18.840.

The spike in winter prices across New England reflects an expectation of strong winter demand and tight supplies, along with the potential for the region to have to price enough to compete with global markets for LNG supplies during periods of extreme demand.

With little spare pipeline capacity, New England this winter relied on LNG imports to meet strong heating needs in the region amid the prolonged cold. And before the projected warmup later this month, another heavy dose of wintry weather is on the table.

AccuWeather said a heaping amount of snow, ice and pounding winds are forecast to strengthen into a bomb cycle along the Eastern Seaboard beginning Friday evening. This would bring “intense weather and dramatic weather changes to the eastern half of the nation, with the most extremes in store for the Northeast,” according to AccuWeather senior meteorologist Dave Dombek.

Even though the snow portion of the storm is likely to last only eight to 12 hours and perhaps just a few hours in some areas, impacts will be significant, AccuWeather said. The storm is projected to first take shape along the central Gulf coast on Friday before turning to the north-northeast and moving up along the Eastern Seaboard on Saturday.

The combination of plunging temperatures from the 30s to the 20s and even the teens in some areas could cause snow to accumulate and slushy areas to freeze, according to the forecaster. Snowfall may come down heavily, causing white-out conditions, with snow persisting for longer across areas farther to the north. Blizzard conditions are most likely to unfold across northern New York and northern New England on Saturday, AccuWeather said.