With mild weather continuing unabated across large swaths of the United States during the Jan. 12-17 period, natural gas forward prices tumbled, according to NGI’s Forward Look. 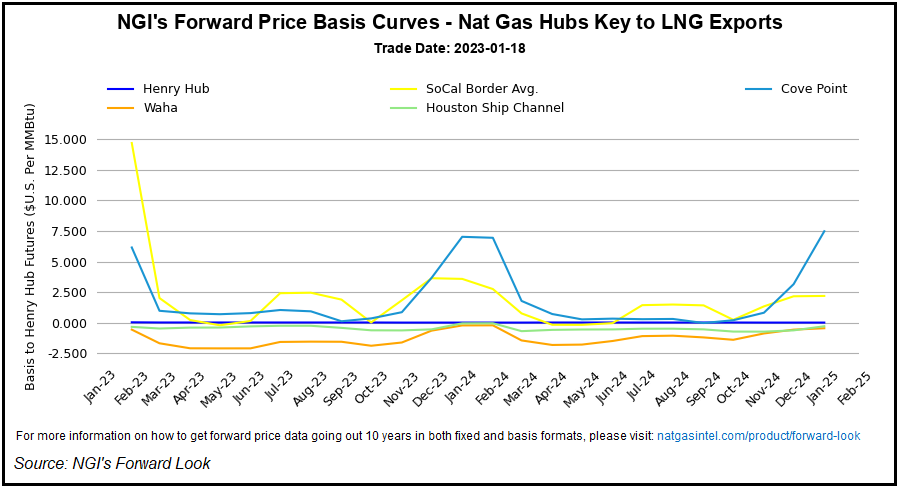 The largest price declines were seen on the West Coast, where a much needed break from the torrential downpours was set to occur. AccuWeather said the pause in major rain and mountain snow events should last through the end of January.

While storms may continue to roll across the northern Pacific in the coming weeks, a zone of high pressure is forecast to build at most levels of the atmosphere along the U.S. West Coast. This setup could force the storms to swing to the north and away from tropical moisture before plunging southward over the interior Southwest, rather than along the California coast.

The changing weather pattern would allow the ground to dry out and streams to recede gradually, according to AccuWeather. However, the runoff would continue to fill area lakes and reservoirs over the next couple of weeks.

This should be a boon to hydroelectric power generation, which has struggled over the past couple of years because of the drought. With less natural gas likely needed for power generation, forward prices cratered.

While weather has moderated in the West, supply constraints may hold the key to returning prices in the region to a trading range that better aligns with the rest of the country.

Kinder Morgan Inc. said repairs on Line 2000 of the El Paso Natural Gas Pipeline system should be completed by the end of January. However, the Pipeline and Hazardous Materials Safety Administration would need to approve the restart, which could take time. The pipeline has been shut since August 2021 following a deadly explosion near Coolidge, AZ.

There are maintenance events underway on other pipelines in the region, which also have restricted gas flows out of the Permian Basin.

Is Winter Really Over Already?

Though it’s still too early to call off winter, the blowtorch warmth experienced thus far in January, along with the mild start to the season, has been a bearish influence over the market. After deficits of more than 300 Bcf late last summer, the market had grown jittery about supply this winter. Freeport LNG initially was expected to return to service before the end of the year, and the strong pull on natural gas was seen potentially leading to a shortfall if demand proved higher than normal. Futures prices shot up accordingly, reaching $10 in the late summer.

Since then, however, a string of above-average storage injections in the fall along with mostly modest draws this winter – and a rare January injection to boot – have squashed any supply fears. What’s more, there’s ongoing uncertainty that Freeport would begin shipping liquefied natural gas by the end of January, a timeline it continues to target.

On Thursday, the Energy Information Administration (EIA) delivered more bearish data. The EIA reported an 82 Bcf withdrawal for the week ending Jan. 13, which landed on the deeper end of a wide range of estimates ahead of the report but still rather “wimpy” overall, according to NatGasWeather.

Estimates submitted to Reuters ranged from declines of 53 Bcf to 81 Bcf, with a median of 73 Bcf. Bloomberg’s poll found analysts looking for a median pull of 75 Bcf. Withdrawal estimates spanned from 61 Bcf to 85 Bcf. A Wall Street Journal survey landed at an average draw of 72 Bcf.

Historically speaking, the draw was far short of last year’s 203 Bcf withdrawal for the similar period and the 156 Bcf five-year average. As such, the 2,820 Bcf of total working gas in storage stood only 19 Bcf below year-earlier levels and 34 Bcf above the five-year average, according to EIA.

Broken down by region, the East and Midwest each reported a 38 Bcf draw, while the Mountain region pulled out 6 Bcf. Pacific stocks slipped by 3 Bcf.

With uncertainty over how cold or how far reaching an end-of-month cold front may be, futures traders took the storage news as confirmation of continued loose supply/demand balances. They expect yet another modest historically light draw in the next EIA report as well.

Early estimates pointed to a draw in the 60-80 Bcf range, which would compare with the year-earlier pull of 217 Bcf and the five-year average of 185 Bcf. As such, analysts appeared to be bumping up their estimates for the end of October. Some reached above 4.0 Tcf.

“The market seems to be pricing that in,” said Enelyst’s Het Shah, managing director of the online energy chat.

Meanwhile, there should be some colder weather moving into the Lower 48 in the final week of January. However, various weather models are not aligned on how cold it may be. The midday Global Forecast System (GFS) was a little colder trending Jan. 25-26 but decently warmer for Jan. 27-29, according to NatGasWeather. The GFS was still colder than the European Centre (EC) for Jan. 26-Feb. 2 by numerous heating degree days, but the gap had closed slightly.

The latest longer-range European forecast released Thursday afternoon also failed to inspire bulls for the first two weeks of February, NatGasWeather said. Instead, it favored a relatively warm ridge over the southern and eastern United States. The 15-day EC run that ended before the longer-range EC also was rather warm over the East for early February.

“If this were to prove true and the Feb. 3-16 period failed to trend back colder over the eastern half of the U.S., this period would be a bearish lean,” NatGasWeather said.

EBW Analytics Group LLC said a key issue in the coming cold pattern is that the bulk of anomalous cold is focused on the central United States. The eastern third of the Lower 48 is expected to increase gas consumption only slightly.

That said, the February contract remains technically oversold, according to EBW. The fundamental turn colder, coinciding with a technically oversold market, is often a recipe for a short-term bounce, increasing the risks of a near-term push higher for February.

“The litmus test for the market, however, will be if the outlook continues to turn colder and drive the risk of widespread production freeze-offs,” EBW energy analyst Eli Rubin said. “At present, it appears that modest freeze-offs may be contained to the Bakken and Rockies, but any further cold expansion…could send risks, and natural gas prices, notably higher.”