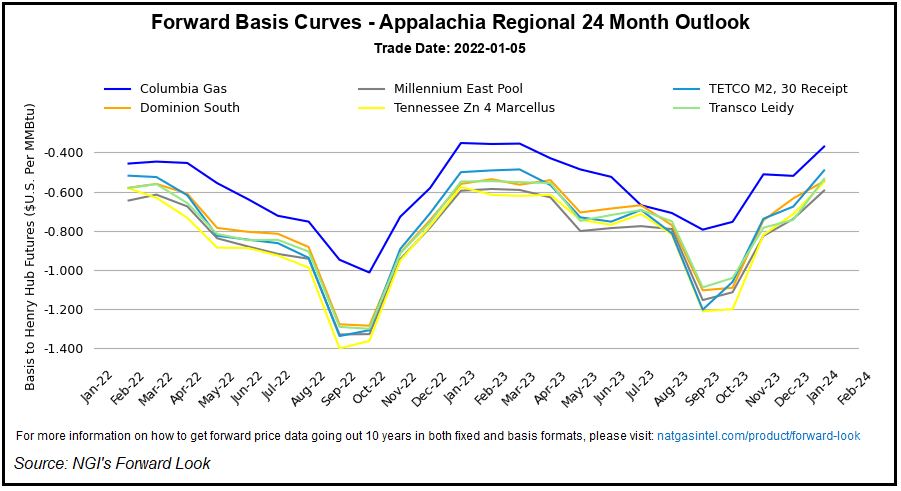 Dollar-plus price increases spread across Appalachia and the Northeast as output struggled to recover amid ongoing cold in the region. The reduction in supply – a whopping 1 Bcf according to estimates – occurred at the same time the biggest snowstorm of the winter hit the Mid-Atlantic. The storm resulted in whiteout conditions, extensive power outages and gnarly road conditions that left motorists on Interstate 95 in Virginia stranded for more than 24 hours. Amid the bullish backdrop, exacerbated by tight pipeline capacity in the Northeast, prices throughout the region surged week/week.

Fixed-price increases were not nearly as stout further out the curve, but were notable nonetheless. March was up 31.0 cents to $4.535, while the summer strip (April-October) shot up 24.0 cents to $3.820, Forward Look data showed.

Similarly, Cove Point climbed steeply on the week as export demand continued to run rampant amid the surge in domestic demand. NGI data shows feed gas deliveries to U.S. terminals continuing to hover around 12 Bcf/d since the final days of 2021, with volumes sitting at around 12.20 Bcf on Friday.

Robust U.S. LNG exports have continued unabated since the summer as a dire supply outlook in Europe and steady building of inventories in Asia have left buyers clamoring for the super-chilled fuel. LNG capacity should ramp up further in the coming months as Sabine Pass continues to commission its sixth production unit and the Calcasieu Pass facility nears in-service.

In Appalachia, prices swelled for the molecules still able to flow to market. February forward prices at Tenn Zone 4 200L – a new addition to the Forward Look suite of pricing locations – rose 39.0 cents from Dec. 31-Jan. 5 to reach $3.571. Summer prices averaged $3.110, up 26.0 cents during the period.

In addition to the Appalachia price point, Emerson and SoCal Border – Wheeler Ridge also were added to Forward Look, which now includes 73 locations.

Elsewhere across the country, the Permian Basin’s Waha Hub in West Texas rallied sharply on the week as South Central production tumbled below 44 Bcf at the worst of the storm, down from more than 46.5 Bcf before the new year began.

However, Criterion Research LLC’s James Bevan, vice president of research, told NGI that output should ramp back as temperatures climb back from the chilly lows. By Monday, daytime highs were expected in the 50s and 60s, with overnight temperatures well above the freezing mark.

Outside of Texas, though, demand remains strong. Aside from a brief lull over the weekend, heating consumption is set to rise again as another frosty weather system sweeps across the northern United States.

A choppier pattern is expected thereafter, with cold snaps set to be interrupted by milder breaks. NatGasWeather said what is likely to be most important to the gas market is whether a frigid pattern returns Jan. 21-23. Weather models are hinting that below-normal temperatures could spread over the northern two-thirds of the country and where the setup would be bullish if it were to hold.

“If cold for Jan. 21-23 holds and doesn’t back off, we must expect a higher open,” NatGasWeather said of Monday’s trading session. “If Jan. 21-23 were to trend warmer, it’s likely to disappoint.”

The potential for a return to the milder pattern would be a huge hurdle for bulls, which have struggled to regain their footing after prices stood above $4.00 in the final week of December. On Thursday, the latest government inventory report moved the goalpost a bit further out of reach.

The Energy Information Administration (EIA) reported a 31 Bcf withdrawal from storage inventories for the week ending Dec. 31. The draw fell far short of expectations, which had called for a pull in the 50s Bcf. NGI modeled a 50 Bcf withdrawal.

EIA recorded a 127 Bcf withdrawal a year earlier, while the five-year average is a 108 Bcf pull.

Bespoke Weather Services noted that holiday weeks are “always tricky.” Still, the reference week ending Dec. 31 also featured low demand, with record warmth for much of the Midwest and South.

“We felt there was actually enough heat in parts of the South so that cooling demand would have more impact than it actually did, apparently,” Bespoke said. “In terms of the supply/demand balance, it looks very loose in our model.”

Without the boost in cooling demand in the South Central, the region managed to add a massive 27 Bcf to inventories, according to EIA. This included 21 Bcf in salts and 6 Bcf in nonsalts. However, participants on The Desk’s online energy chat Enelyst noted that withdrawals during the past week’s freeze may quickly erase those gains.

Mobius Risk Group analysts also noted that the recent cold weather in the region could result in “a respectable withdrawal” in the next EIA, but the impact of Thursday’s data point was “material nonetheless.”

The Midwest posted the largest withdrawal at 25 Bcf, while the Pacific region pulled 16 Bcf, EIA said. East stocks slipped 10 Bcf, and Mountain inventories were down by 8 Bcf.

Considering there are 13 remaining reporting periods in the traditional withdrawal season, the probability of falling sub-1 Tcf is swiftly falling toward single digits, according to Mobius. If colder-than-normal temperatures show up more often than not over the next six weeks, however, there could be a string of 200-plus Bcf withdrawals.

“This would be a catalyst for the market to reconsider winter risks,” Mobius said. “Conversely, if the next six reporting periods average less than 150 Bcf, the market may officially declare winter 2021-2022 over.”

In discussing price behavior in recent months, EBW Analytics Group’s Eli Rubin, director of Market Analysis, said the sky-high levels achieved by Nymex winter futures earlier in the fall were predicated on the risk of such shortages given strong exports, domestic supply deficits and the uncertainty of what the winter would bring on the weather front.

“In these significantly bullish scenarios, prices could have risen toward $13-14/MMBtu — enough to reduce power sector natural gas demand via gas-to-oil switching — or, in a sufficiently cold winter outcome, even converge with global LNG prices north of $20/MMBtu to force economic shut-ins of LNG exports and conserve supplies for domestic usage,” Rubin said.

The failure of bullish risks to materialize primed Nymex futures for declines, while extremely mild fundamental outcomes greased the skids lower, according to the analyst. Notably, the gas market made it to Christmas without the EIA reporting a single triple-digit withdrawal.

“While winter risk premiums have narrowed significantly, as the natural gas market enters 2022, it remains in a state where bullish conditions may have to materialize to justify the current forward curve,” Rubin said.