With Lower 48 natural gas production well off recent highs, forward prices continued to strengthen May 2-8 despite the absence of any early-summer heat to drive demand. Gains were small, however, as temporary pipeline maintenance was to blame for a significant chunk of the supply cuts. 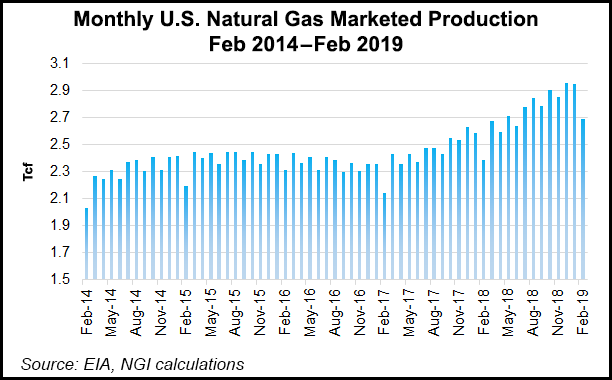 Prices rose less than a nickel on average through the rest of the summer strip (June-October), while the winter package (November 2019-March 2020) was up 4 cents on average, according to NGI’s Forward Look.

Nymex futures led the way, trading lower for several days during the May 2-8 period as weather forecasts for the next couple of weeks showed a mix of below- and above-normal temperatures. Models overnight Thursday reflected slightly higher demand overall, with the addition of heating degree days in the East and the risk of warmth returning to the South after an extended period of lower demand because of storms moving across the region through the third week of May, according to Bespoke Weather Services.

“As an upper level trough becomes more pronounced over the West in week two, warmth spreads into the eastern half of the nation, leading to slightly higher demand with 85- to 90-degree temperatures across the southeast quadrant of the nation,” Bespoke chief meteorologist Brian Lovern said. “Models do weaken the eastern warmth at the end of week two, however, bringing demand back toward normal levels as we move into the Memorial Day weekend.”

Despite the generally mild pattern on tap for the coming weeks, Nymex futures staged a noteworthy rally Wednesday as production, already off recent highs, took another big hit when nearly 1 Bcf/d of Rockies supply fell off the radar. Genscape Inc. reported that 920 MMcf/d of regional production was shut in after a series of underperformance notices posted by Colorado Interstate Gas (CIG) last Tuesday eventually led to a complete shut-in.

The two gas processing plants being shut in, Platte Valley and Lancaster, both had a scheduled capacity of 0 MMcf/d for May 8. A similar event at the two gas processing plants in June 2018 partially shut-in the Lancaster plant, while Platte Valley was able to absorb about 50% of the displaced volumes, which is consistent with prior events given that both plants operate in tandem, according to Genscape.

“In June of 2018, it took five days for the plant to nominate volumes comparable to prior scheduled quantities,” Genscape natural gas analyst Matthew McDowell said.

With other various pipeline maintenance events stifling production elsewhere, the Nymex June contract jumped 7.3 cents to settle Wednesday at $2.61. Such a leap proved to be too much for market bulls to sustain, however, as the prompt month was already a few pennies lower early Thursday as traders eyed an expected large bump in storage inventories. A Bloomberg survey had shown expectations ranging from a build of 79 Bcf up to 108 Bcf, with a median 87 Bcf injection. NGI’s model predicted an 89 Bcf injection.

The Energy Information Administration (EIA) reported an 85 Bcf injection into storage inventories for the week ending May 3. The reported build was in line with market expectations and exactly on target with last year’s injection, though it was well above the 72 Bcf five-year average.

While the fresh storage data was viewed by most market observers as neutral, Genscape analyst Eric Fell said the print indicates the market has been about 4.5 Bcf/d loose on a weather-adjusted basis versus the five-year average over the same six-week period.

Total Lower 48 working gas in underground storage stood at 1,547 Bcf as of May 3, 128 Bcf (9.0%) more than year-ago levels but 303 Bcf (minus 16.4%) below the five-year average. By region, the South Central saw the largest build for the week at 33 Bcf, including 24 Bcf into nonsalt and 10 Bcf into salt stocks. The East injected 20 Bcf, while the Midwest injected 19 Bcf on the week. Farther west, the Mountain region posted a net 3 Bcf weekly injection, while the Pacific injected 10 Bcf, according to EIA.

While current data suggests the market remains significantly oversupplied — to the tune of a projected end-of-season storage level of more than 4 Tcf — recent trends in Permian Basin production could give the market some pause. Permian production has remained subdued following the unprecedented negative pricing seen in late March and early April, although prices have mostly stayed out of negative territory since then.

Prior to April, average Permian monthly production had posted month/month increases in 12 out of 15 months since the beginning of 2018, according to Genscape. From January 2018 through March 2019, monthly average production increased from around 7.2 Bcf/d to around 10.2 Bcf/d, equivalent to an increase of about 200 MMcf/d in each successive month.

However, when prices began to venture into negative territory in late March and fell to unheard-of record lows in early April, production plunged roughly 500 MMcf/d lower month/month from March to April.

“This was the second-largest month/month drop for the basin, behind only the 578 MMcf/d drop from November to December 2015,” Genscape analyst Joseph Bernardi said. “Production has ticked up slightly in the first week of May, coming in about 130 MMcf/d higher than April’s average.”

“In other words, the drop in El Paso Natural Gas’ receipts from Alpine High is just under one-third (32%) of the total net production decline,” Bernardi said.

Meanwhile, Appalachia producers are also cutting back on capital spending as persistent low prices have depressed investment returns and market valuations, which will likely temper production increases after a period of “phenomenal growth”, according to credit ratings agency Moody’s Investors Service.

“Exploration and production companies in Appalachia have come under sustained shareholder pressure to improve their capital discipline amid lower natural gas prices that cap margins and returns,” said Moody’s senior credit officer Elena Nadtotchi. “In response, most natural gas producers in the region are cutting growth investment to manage their businesses within operating cash flow.”

Improved access to cheap midstream infrastructure will be a key driver for future margin growth, and companies with low gathering and processing costs and solid pipeline arrangements will be better able to access more attractive markets and thereby maximize realized prices, according to Moody’s. Meanwhile, Appalachian producers will seek to maintain and improve drilling efficiencies and may focus on developing their higher-margin, liquids-rich acreage to maximize price realizations, the firm said.

Indeed, as part of its continued transformation into an oil-focused producer, Chesapeake Energy Corp. indicated on Thursday that it plans to run only three rigs on its natural gas assets in the second half of the year. That’s despite a record gross production level of 2.5 Bcf/d in Pennsylvania in January, resulting in average net Marcellus production of 948 MMcf/d during the first quarter.

Southwestern Energy and Range Resources Corp. have also both announced year/year capital expenditure cuts and substantially lowered their production guidance for 2019 to live within cash flows. This slowdown is reflected in the steady decline in the number of drilled but uncompleted wells, which have fallen nearly 60% since 2015 as production has grown around 70%, according to Barclays Commodities Research. Pennsylvania well permits also dropped by about a third in 1Q2019.

“Lower activity feeds our thesis that sequential Appalachian production growth will be limited to less than 1 Bcf/d through 4Q2019,” Barclays said.

Continued pipeline maintenance in Western Canada that has restricted exports left NOVA/AECO C prompt-month prices in the red for the May 2-8 period, according to Forward Look. June prices fell 2 cents during that time to average 66.6 cents, while July rose 2 cents to 74.1 cents. The balance of summer was up a penny to 85 cents, and the winter strip climbed a more meaningful 6 cents to $1.61.

Last Tuesday, Westcoast Transmission announced the latest in a string of pipeline maintenance events that cut receipts by more than 400 MMcf/d as part of a modernization project at Compressor Station 1 in northern British Columbia. The maintenance required the McMahon and Aitken Creek plants to shut in for the duration of the five-day event that was scheduled to end Saturday. McMahon averaged 411 MMcf/d in receipts onto Westcoast up until the eve of the maintenance, according to Genscape. It then dropped nearly 100 MMcf/d to 315 MMcf/d for Monday’s nominations.

Westcoast announced another five-day planned maintenance was set to begin Saturday (May 11), limiting more than 500 MMcf/d of flows onto TC Energy Corp.’s mainline in Alberta. Most of the gas can be rerouted via another interconnect between the two pipes, Genscape said.

Westcoast was to perform a station outage affecting its Sunset Compressor, which would be limited to zero operating capacity through Wednesday. “In the past 30 days, this interconnect has delivered an average of 509 MMcf/d from Westcoast to TC Alberta,” Genscape’s Bernardi said.

Past events limiting this interconnect have sometimes corresponded with downward movement in Station 2 basis price as volumes are backed up in northern British Columbia. “However, cut flows at Sunset are usually accommodated by increased deliveries from Westcoast to Alberta at their separate interconnect at Gordondale,” Bernardi said.

For example, during a maintenance event last September that limited Sunset delivery capacity to zero (versus a previous 30-day average of 350 MMcf/d), deliveries at Gordondale increased by over 250 MMcf/d compared with their 30-day baseline, according to Genscape.

Northwest S. of Green River responded to the import restrictions with an 8-cent jump for June prices, which averaged $2.074, Forward Look data show. July climbed 6 cents to $2.351, the balance of summer rose a nickel to $2.29 and the winter edged up a few pennies to $2.77. 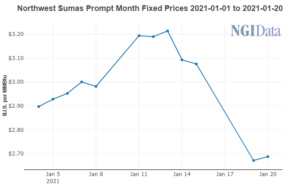