With the end of winter in clear view and March forecasts far from threatening, natural gas forward prices retreated throughout the Lower 48 during the Feb. 17-23 trading period, NGI’s Forward Look data show. 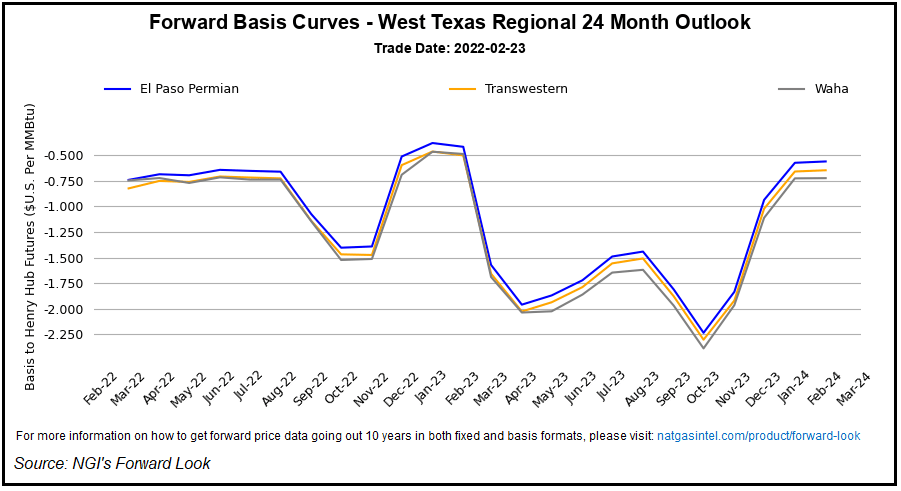 March fixed price forwards at benchmark Henry Hub shed 9.4 cents during the period to average $4.633/MMBtu. Front month fixed price discounts of around 10-20 cents week/week were the norm for most hubs.

Following recent indications of a strengthening domestic production outlook, a number of hubs in producing regions also saw notable basis discounts for the period. In the Permian Basin, Waha March basis fell 21.2 cents to end the period at minus-74.6 cents. In Appalachia, Columbia Gas basis fell 12.2 cents to minus-63.1 cents.

Meanwhile, the crisis in Ukraine gave natural gas traders plenty to think about given the profound implications for global energy markets. However, while liquefied natural gas (LNG) exports have tethered the U.S. market to overseas dynamics, the impact on domestic natural gas prices from Russia’s decision to invade appeared relatively limited as of Thursday.

Considering the downright outlandish final day of trading for the February Nymex contract a month earlier, Thursday brought a comparatively subdued finish for March futures in terms of the day/day net change. The contract rolled off the board at $4.568, off 5.5 cents on the day.

Futures had rallied much higher earlier Thursday as energy traders processed the events unfolding in Ukraine, where fears of Russian military aggression turned to grim reality.

The Dutch Title Transfer Facility (TTF) surged across the curve Thursday, when the March contract gained almost $15 to finish close to $44/MMBtu. The prompt TTF hit an intraday high of $47.23, notching the largest single-day surge on record.

“It is hard to understate the magnitude of the steps taken by Russia’s President Putin in the early hours” Thursday morning, analysts at Kpler Research said in a note.

Europe’s gas markets had already been responding to the prospect of reduced imports from Russia, including pulling additional LNG cargoes from Qatar and the United States, according to the firm.

Stockpiles on the continent “remain low at just 30% of capacity, but thankfully the region is coming out of a relatively mild winter period,” the Kpler analysts said.

More broadly, the disruption to global energy markets means “extreme price action” is likely to continue in the short- and medium-term, according to Kpler.

“Volatility will remain high, with any announcement having the potential for 5% swings in either direction in oil markets and even more in gas markets,” the analysts said.

Despite trading in a wide range, especially for the expiring March contract, the net change for Henry Hub futures Thursday pointed to domestic traders anticipating muted impacts from the developing Ukraine crisis.

The EIA print “does reflect that supply/demand balances have loosened compared to the very tight weeks driven by production freeze-offs, but not sufficiently loose such that the market should feel too comfortable on refilling prospects over the next several months,” Bespoke Weather Services said in a note to clients Thursday.

While Nymex prices were soaring early Thursday, Rubin pointed to the possibility that the April contract could “recede over the next seven to 10 days” as traders “reassess the role of global developments on U.S. natural gas fundamentals.”

Russia’s invasion of Ukraine had immediate impacts on oil and gas markets Thursday, but there could also be political implications for efforts by the West to transition away from fossil fuels, according to analysts at ClearView Energy Partners LLC.

“Western governments’ green agendas seem likely to face further headwinds, not only because leaders are focused on immediate challenges to conventional fuel security, but also because high prices can lead to voter backlash against all sources,” the ClearView analysts said in a research note Thursday.

Longer-term, however, the situation could tilt the scales in favor of a greener energy system, according to the firm.

“Looking further ahead, we would suggest that a further fraying of international order could stimulate green investment in several ways,” they said.

Among the potential ramifications, the ClearView analysts said risks to energy imports could “make a case for diversification through transportation electrification and endogenous green generation.” What’s more, higher energy prices “could make energy-insecure governments more willing to introduce additional incentives to accelerate such a transition.”