Mother Nature delivered a gut punch to the natural gas market, pulling back on projections for a polar vortex to descend into the Lower 48 by the end of the month. The frigid forecast was seen as the missing link in an otherwise solidly supported market. 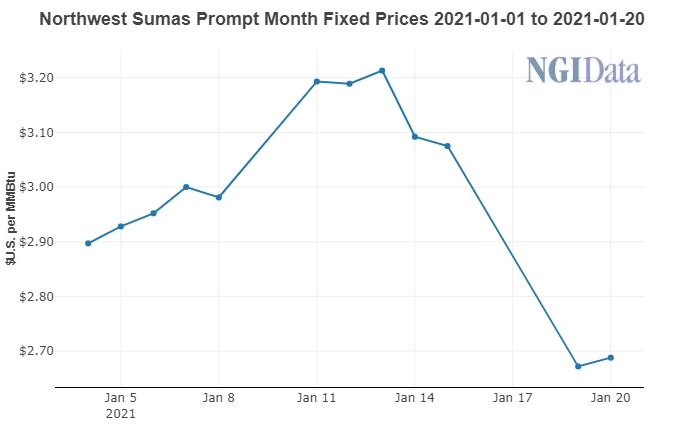 EBW Analytics Group said the “rare loss” of a startling 35 gas-heating degree days and 70 Bcf within the near-term time frame triggered the collapse of the February Nymex futures contract, which plunged 19 cents Tuesday, following the Martin Luther King Jr. holiday. The prompt month held fairly steady Wednesday, but ultimately settled the Jan. 14-20 period about 13.0 cents lower than where it started. The balance of winter (February-March) was down about 11.0 cents to $2.540, the summer (April-October) was down 6.0 cents to $2.950 and the winter 2020-2021 strip was down 4.0 cents to $2.950.

The latest weather models showed some variability mixing in over the next couple of weeks, but there was “no material move” to the colder side in the data overnight Wednesday, according to Bespoke Weather Services. The firm also still sees the pattern turning warmer than normal moving into early February.

The shift back to a positive Eastern Pacific Oscillation (EPO) is the main driver of the turn back warmer, according to Bespoke. Some North Atlantic Oscillation (NAO) blocking keeps variability in play for the balance of January because of “enhancing storminess,” but the negative NAO looks to weaken gradually. This would allow the warmer EPO signal to take over moving into February in much of the eastern half of the nation, with any colder anomalies back out West, the forecaster said.

“It would not be surprising to see further notable declines in the weeks ahead,” according to EBW. “Still, even after factoring in lower demand, storage inventories remain set to drop below year-ago and five-year average levels during February, while very cold weather in Europe and Asia has supported summer LNG export expectations.”

The Energy Information Administration (EIA) is set to release its weekly storage inventory report on Friday, a day later than usual because of the holiday and the inauguration of President Biden. Ahead of the report, withdrawal estimates were steep and wide ranging.

Meanwhile, LNG demand is running rampant. Though Asian gas prices have fallen from their recent highs, demand for the super-chilled fuel remains strong. However, Wood Mackenzie noted that feed gas flows via interstate pipelines had declined by nearly 730 MMcf/d since Wednesday to 8.93 Bcf/d on Thursday based on evening cycle nominations data.

The declines were concentrated at Cheniere Energy Inc.’s Sabine Pass LNG facility, “where heavy fog has significantly affected visibility,” according to Wood Mackenzie. In the wee hours of Wednesday morning, the firm’s proprietary monitors detected five of six engines turned off at Sabine Pass Train 1. Sabine Pilots suspended service as of 4:30 a.m. CT because of fog.

Furthermore, for Thursday’s gas day, Creole Trail Pipeline was scheduled to perform its annual emergency shut down test, which requires station capacity to be reduced to zero flow through 5 p.m. “Consequently, deliveries from Creole Trail Pipeline to Sabine Pass LNG have declined by 386 MMcf/d, roughly 53% of all declines observed at Sabine Pass LNG,” Fussee-Durham said.

Regardless of the near-term hiccups, LNG demand is expected to remain strong for the remainder of winter and even through the spring and summer. Schneider Electric analyst Henry Homer said earlier this week the Asian market continued to influence European price movements. Supply concerns still linger throughout Asia given storage inventories and shipping availability. Pakistan is facing supply shortages and was reportedly considering reducing gas supplies to factories as the week got underway.

As more LNG cargoes were diverted from Europe toward Asia to match skyrocketing demand in recent weeks, European storage inventories also fell below the five-year average over the weekend and stood at 60.7% last Sunday. Replenishing those stocks this summer could help keep U.S. LNG supported.

U.S. forward markets posted big losses across the front of the curve as wintertime demand has mostly fallen short. Prices for the summer and beyond also declined, but decreases were limited to around a nickel or less.

Up until a few days ago, the gas market had been expecting a polar vortex to move into the country in the final week of January, which would drive up demand and possibly linger into early February. However, weather models since have lowered the intensity and span of that Arctic blast.

NatGasWeather said the cold shot would still sweep from Western Canada across the northern United States and into the East from Tuesday through next Friday (Jan. 26-29). However, the weather data was bouncing between colder and warmer trends.

Still, the period from Saturday to next Friday (Jan. 23-29) is “expected to bring strong national demand, even with inconsistent weather trends,” NatGasWeather said.

The period from Feb. 1-4 still “isn’t nearly cold enough,” according to the forecaster, as upper high pressure expands to cover most of the country, besides portions of the West and potentially the East. As such, those days are “rather warm/bearish weighted” because of the warming expected to take place across much of the United States.

Interestingly, prices north of the border in Western Canada fared much better. NOVA/AECO C prices for February fell only 6.0 cents to $2.253, while March slid 9.0 cents to $2.099. Each of the summer and winter strips were down a nickel or less.

Mobius Risk Group said year/year Canadian imports in December and January have been significantly stronger. At more than 1 Bcf/d higher than the same period last winter, the amount of gas being delivered to the Upper Midwest and West has muted the tightening supply and demand environment in those regions, according to the firm.

“If monthly and daily prices continue to support imports at recent levels, the end result will be a reduction in Canadian inventory which remain significantly higher than year-ago levels and in contrast to what has been observed in the Lower 48 despite a 100 heating degree day deficit for the Nov. 1-Jan. 19 period.”