With Old Man Winter appearing to trade in his snow boots for flip flops, natural gas forward prices ratcheted up declines during the final week of 2020. February prices tumbled an average of 11.0 cents from Dec. 24 to 30, while the balance of winter (February-March) fell an average 9.0 cents, according to NGI’s Forward Look. 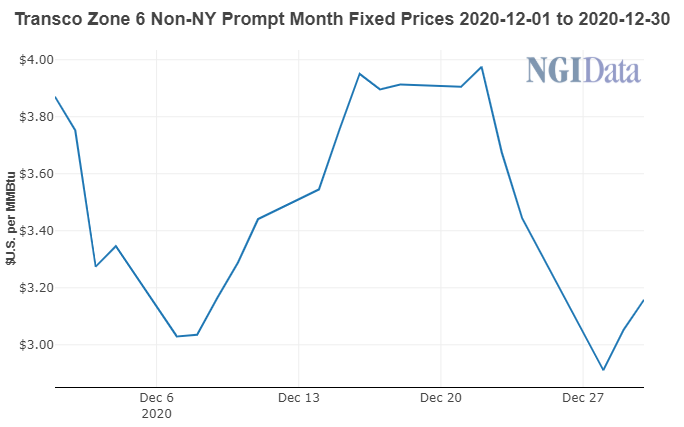 Smaller losses of around a nickel were seen for next summer and the winter 2021-2022 strip at the majority of pricing hubs, however, Northeast points continued to register steep losses that far out the curve.

Henry Hub futures were especially volatile, because of both big changes on the weather front and the typical volatility that accompanies the expiration of a Nymex contract. The January futures contract rolled off the board at $2.467 after trading to an intraday high of $2.632 on Christmas Eve.

At the heart of this week’s steep decline was a huge warmer shift in weather models over the long Christmas holiday weekend that sets up a mild pattern through the middle of January. On Thursday, the European model added a massive amount of demand back into the forecast, but the American Global Forecast System added only a very modest amount. This suggests that it either needs to add demand, or the European model needs to lose demand, according to NatGasWeather.

“This will be important ahead of another long holiday break, with all markets closed Friday and another dangerous weekend to hold,” the forecaster said.

Regardless of how the pattern shakes out for the next two weeks, NatGasWeather said both models agree that at least some cold is expected to return to the Lower 48 around Jan. 13-15.

Bespoke Weather Services also noted the chillier outlook for the middle of January, but said it is unclear yet whether the Eastern Pacific Oscillation would back down enough to allow for that variability in the pattern. Confidence remains “below average” given the prior weekend’s failure.

For now, the coming span of mild weather is likely to keep the hefty storage surpluses that have plagued the market since the spring relatively intact. Lower 48 inventories were at 3,919 Bcf at the end of October, and the latest storage draw left stocks still well ahead of historical levels.

The Energy Information Administration (EIA) on Thursday reported a 114 Bcf withdrawal from storage for the week ending Dec. 25. The draw was much smaller than the 125 Bcf pull the market had been expecting, with analysts pointing to several factors that may have played into the big miss, the second in as many weeks.

Bespoke, which had projected a much larger pull of 130 Bcf, said the actual EIA figure reflects a fair amount of loosening, even when considering the Christmas holiday impact. The firm also noted that the reference period was a higher wind week as well, “something we feel we underestimated.”

Bespoke said there needs to be some tightening in the new year to build a bullish case for prices, barring a turn to a truly colder-than-normal weather pattern. “Low prices should help in the burn department. Data in the coming week will be important.”

If weather can become more supportive, other core fundamentals would also get to bask in the limelight. Liquefied natural gas (LNG) has made a remarkable comeback since the dog days of summer, when dozens of U.S. cargoes were canceled month after month. Feed gas demand has fairly consistently come in near record levels of around 11 Bcf, with NGI data on Thursday showing nearly 10.9 Bcf being delivered to U.S. terminals.

Tudor, Pickering, Holt & Co. (TPH) analysts expect the recent LNG demand boom to continue in 2021, with analysts forecasting a growth rate of 8%. This compares to the 1% growth rate achieved in 2020 but still trails the three-year average 11% growth rate.

Furthermore, as winter fades, analysts expect Europe to step in, eager to refill storage inventories that have been depleted as shipments diverted to Asia in 1Q should allow inventories to draw down near the five-year average. This would free up more than 600 Bcf of capacity for incremental imports. Additionally, emerging markets such as Brazil, Pakistan and Thailand are expected to make “meaningful demand contributions,” which should pull the market close to balance.

“Our base estimates show a marginal oversupply of just 3 million tons (0.4 Bcf/d), which should minimize the need for cancellations in 2021 and support much stronger pricing for exporters,” the TPH team said.

Meanwhile, TPH reported that the South Korean Ministry of Trade, Industry, and Energy released the 9th Basic Plan for Electricity Supply and Demand, in which the country outlined the closure of 30 coal-fired power plants. Of these, 24 are being converted into natural gas-fired power plants, according to TPH.

However, analysts pointed out that while absolute capacity of gas-fired generation continues to grow, market share is expected to edge down from 32.3% in 2022 to 30.6% by 2034. In terms of what this means for LNG demand, TPH sees this equating to around 9 million metric tons/year (mmty), or roughly 1.2 Bcf/d, of incremental LNG imports by 2030, which is roughly in line with its current growth forecast of 8 mmty, or 1.1 Bcf/d, through 2030.

Although the last day of 2020 got off to a chilly start, national demand was set to fall lower by the weekend, with the unseasonably mild conditions forecast to last through the first week of January at least.

Northeast forward markets were hardest hit as the frosty low temperatures in the single digits to the 30s over the northern states were expected to rise sharply in the days ahead. NatGasWeather said national demand would ease to light levels this weekend through the coming week as the amount of subfreezing air over the United States wanes.

“There will still be weather systems bringing rain and snow, but mainly over the West and at times the Plains and southern U.S.,” the forecaster said.

Though still fetching a sharp premium to benchmark Henry Hub prices, losses of close to 40.0 cents were common at the front of several Northeast forward curves. In New England, Algonquin Citygate February prices plunged 39.0 cents from Dec. 24-30 to reach $5.166, according to Forward Look. The balance of winter dropped 27.0 cents to $4.430, while the summer 2021 strip slipped only 5.0 cents to $2.270. Prices for the following winter fell a much steeper 21.0 cents to $5.510.

Dominion Energy Cove Point, which has the capability to both import LNG for regasification and liquefy gas for export, has received an import cargo, according to Bloomberg vessel tracking data. The Bilbao Knutsen docked at the terminal near Lusby, MD, on Wednesday.