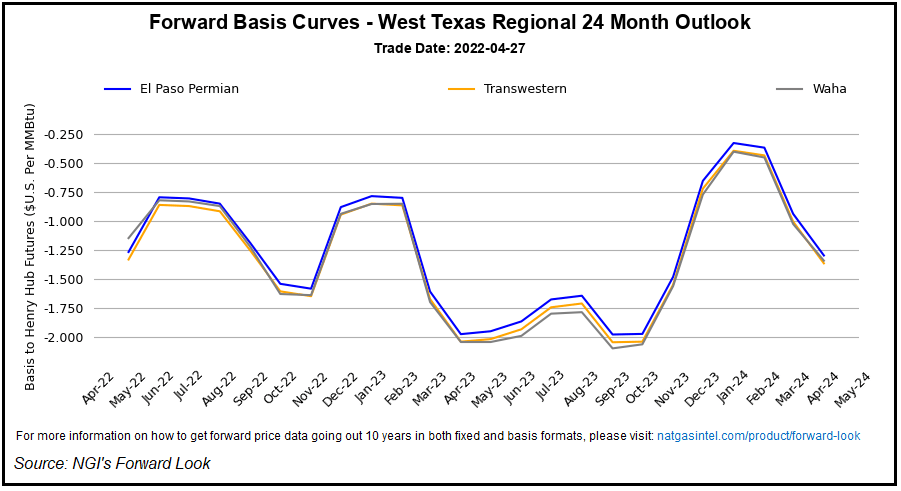 Outside of a few hubs in the Rockies, Southwest and Texas, where pipeline maintenance appeared to impact prices, fixed-price front-month forwards trended higher week/week. Fixed prices for May at Henry Hub jumped 33.0 cents higher to $7.268/MMBtu.

Volatility characterized Nymex futures action during the period, with sharp moves in both directions, culminating in a 41.7-cent rally to close out trading of the May contract on Wednesday.

Shorter term factors, including declining heating demand and the prospect of production volumes coming back online following recent weather-related impacts, were pointing to “deeper consolidation” for prices heading into the first part of May, Rubin said.

Events abroad continued to fuel uncertainty for the domestic market during the week as Russia reportedly halted exports into Bulgaria and Poland, impacting Dutch Title Transfer Facility (TTF) prices and pointing to potential upside risks for prices in the United States.

“Following earlier threats that gas exports would be halted if payments weren’t made in Russian rubles, reports that exports to Bulgaria and Poland would be halted pushed TTF higher on the day,” analysts at Tudor, Pickering, Holt & Co. (TPH) wrote in a recent note to clients.

With imports into Europe already showing signs of falling off recently, the prospect of a further drop-off in supplies should “keep a bid in prices as we progress into the summer” and spur demand for liquefied natural gas (LNG) imports into the continent, according to the firm.

“Closer to home, with what we see as a continued elevated risk profile for European balances and thus firmness in pricing, we see the present dynamics continuing to support healthy” economic incentives for U.S. LNG exports, along with a “positive risk/reward skew for Henry Hub prices,” the TPH analysts said.

Rystad Energy analysts Kaushal Ramesh and Nikoline Bromander said the move by Russia constituted a “first shot back at the West” in retaliation for efforts to economically punish the country for its invasion of Ukraine.

“After a few weeks of relative calm as we entered the shoulder season, Russia has wielded its energy weapon for the first time by blocking gas to Poland and Bulgaria,” the Rystad analysts said. While the move “rattled the cages of gas markets,” the prospect of escalation had already been priced in, resulting in a swing that “is far less than at the start of the war in Ukraine.”

There remains reason for caution given that the embargo against Poland and Bulgaria could set a precedent, according to Rystad. A similar action against countries such as Germany or Italy could bring “more severe consequences” for the European market.

“It remains the case that a scenario of an all-out halt in flows may again send the TTF to over $100/MMBtu,” Ramesh and Bromander said.

Spring Maintenance, And A Blizzard

Looking at regional basis shifts, some combination of spring pipeline maintenance and a blizzard in North Dakota appeared to shake up prices (and production estimates) from the Rockies to West Texas during the April 21-27 time frame.

The National Weather Service reported wintry conditions in North Dakota resulting from a “Colorado Low” moving across the state over the April 22-24 weekend, bringing with it “adverse and widespread” impacts, including road closures and power outages.

Following the wintry weekend, Wood Mackenzie reported a notable decline in Lower 48 production volumes. They included a drop of around 235 MMcf/d flowing out of the Rockies region, attributed in part to the blizzard in North Dakota.

Meanwhile, Texas and Midcontinent volumes were also showing signs of impacts associated with work on the El Paso Natural Gas, Enable Gas Transmission and Natural Gas Pipeline Co. of America systems, according to the analyst.

Northwest Rockies May basis slid to minus-81.0 cents, a 30.1-cent swing for the period, while Cheyenne Hub tumbled 51.5 cents lower to trade at a $1.070 discount to Henry Hub.