Aside from moderating premiums in western markets, natural gas forwards marched higher during the June 10-16 trading period. Supply risks served to push July Nymex prices higher, while technical factors and a somewhat cooler look to the weather picture toward the back half of June helped limit gains. 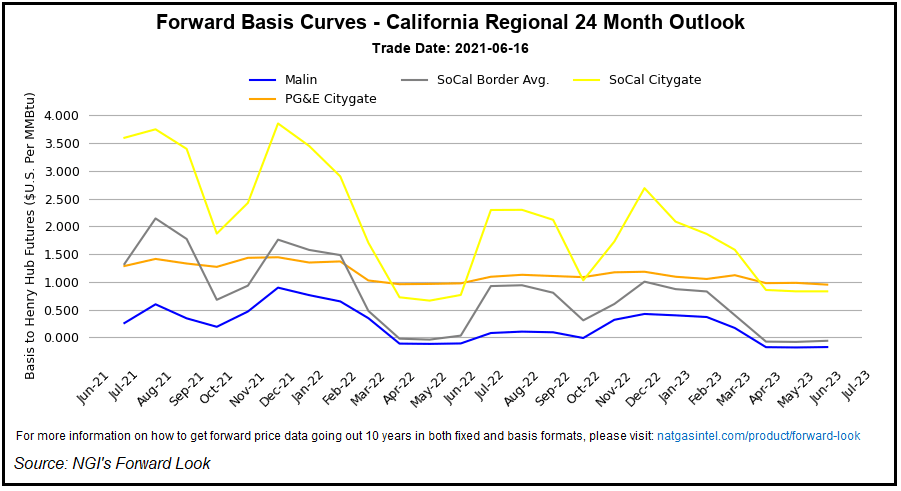 July fixed prices at Henry Hub surged 10.4 cents to $3.254/MMBtu during the period. Supply concerns, including revelations that the Texas Eastern Transmission Co. system could endure prolonged restrictions on flows out of the Northeast, provided the catalyst to send Nymex futures surging over the past week.

Pacific Gas and Electric Co.’s (PG&E) announcement to reclassify a sizable 51 Bcf chunk of its inventories from working gas into base gas similarly drove bullish sentiment during the period.

A 14.7-cent rally last Friday (June 11) provided something of a step change in the natural gas price outlook, one that translated into week/week fixed price gains for forwards at numerous locations across the Lower 48.

Looking at the futures market, after giving back some gains earlier in the week, the July Nymex contract finished virtually unchanged at $3.253 Thursday.

Helping to apply downward pressure on prices, the temperature outlook has been trending cooler in the medium range, according to Bespoke Weather Services.

“We still see the pattern averaging hotter than normal, but nothing extreme once beyond this weekend,” Bespoke told clients Thursday. There is also “some risk that the final portion of the month still edges a bit cooler yet, as models advertise an upper level pattern that features enough troughing into the eastern half of the nation to lead us to believe the models may be too hot at the surface.”

Still, this month remains on pace to count as one of the hottest Junes on record, according to Bespoke. However, “much of that is due to the heat we have already seen, and will see this weekend, as opposed to what appears to be on the way afterwards.”

Traders seemed unimpressed after the Energy Information Administration (EIA) on Thursday reported an injection of 16 Bcf into natural gas storage for the week ended June 11, a result skewed by the PG&E reclassification. EIA announced an implied build of 67 Bcf for the week, a few ticks below median estimates.

The implied 67 Bcf build came in “as a tighter number in our model,” Bespoke said. However, “we must be somewhat careful before reading too much into it, as a couple of the last few weeks have been heavier” for heating degree days (HDD). The HDDs “do not really add true demand much in May. Factoring that in, the number is not as strong, but still tighter than the last few numbers.”

A recent dip in U.S. liquefied natural gas (LNG) utilization has provided some “marginal” relief for tight balances, according to Energy Aspects. The firm estimated a 1.8 Bcf/d week/week drop in feed gas flows for the period ended June 10, with volumes dropping to 9.2 Bcf/d, or 80% of capacity.

According to NGI’s U.S. LNG Export Flow Tracker, feed gas flows have continued to hover around 9.5 Bcf/d over the past week.

“The reductions in LNG exports amid last year’s cargo cancellations accelerated in late May and early June 2020,” meaning 9.2 Bcf/d of feed gas still “represents year/year growth of over 5.0 Bcf/d,” Energy Aspects said. “We expected 5.6 Bcf/d of year/year gains between June and October will help widen the Lower 48’s year/year storage gap, as LNG utilization keeps balances tight through the end of the injection season.”

Analysts at EBW Analytics Group characterized some of the recent price action in the futures market as a result of technical factors rather than fundamentals. They pointed to price swings earlier in the week that “occurred even though near-term supply/demand fundamentals were largely unchanged — a clear indicator that technical factors and machine-driven algorithmic trading were moving the market.”

According to ICAP Technical Analysis, bears need to prevent the July contract from breaking through resistance around $3.395 to keep prices from running higher to a band of technical targets between $3.500 and $3.527.

“While they were able to engineer a perfectly timed reversal, this was just step one,” ICAP analyst Brian LaRose said in a recent note to clients. “To have a case for a more meaningful top support must be broken as well. Key support is down at $3.081-3.037. Cannot rule out another round of fresh highs until/unless this band is broken.”

Sweatin’ It Out West

The most prominent prompt-month basis moves in NGI’s Forward Look data for the June 10-16 period occurred out West.

The National Weather Service (NWS) on Thursday said a “dangerous heatwave” continued to impact western portions of the country, with warnings and advisories in effect due to the sweltering temperatures in California, Nevada, Arizona and Utah.

Temperatures were expected to “once again reach record-breaking highs across much of the region” Thursday, “with several records likely to fall on Friday and Saturday as well,” the NWS said.

Despite the toasty temps for the West, forwards markets determined during the trading week that basis premiums at hubs in the Rockies, Pacific Northwest and California had become overheated.

Prompt month basis at SoCal Citygate shed 28.9 cents week/week but remained at a $3.595 premium to Henry. Elsewhere, Northwest Sumas basis dropped 15.9 cents during the period to trade at 15.7 cents above the benchmark on average, while El Paso San Juan basis for July eased 14.5 cents to 5.6 cents above Henry Hub.

Maxar on Thursday was predicting moderating temperatures by next week in Southern California, with highs in Burbank expected to fall from the 90s back into the low- to mid-80s.

From Tuesday (June 22) through Saturday (June 26), “California will deal with a nearby trough that provides mainly seasonal temperatures, and the Interior West has above normal temperatures for most of the period,” Maxar said. “The Northwest is additionally above normal, with much aboves expected early and late in the period.”