After weeks of softening for natural gas forwards, prices bounced back during the April 4-10 period as production remains down from earlier post-winter highs. May prices rose an average of 4 cents, while June rose a nickel, according to NGI’s Forward Look. 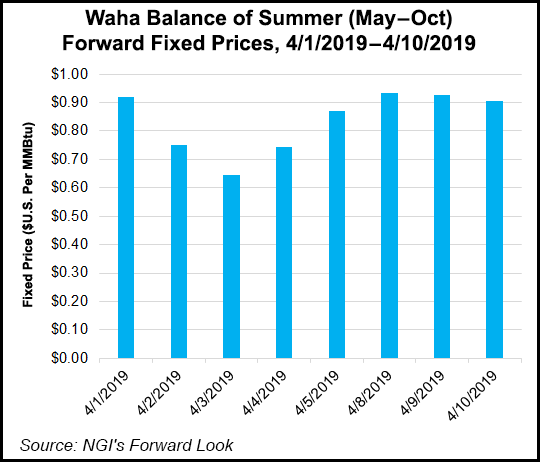 Average gains would be more substantial if not for weakness in the Rockies and in parts of California, where mild weather and strong hydro output have crushed gas demand. The overall rebound, however, follows increases of around a nickel that were seen through the winter strip on the Nymex futures curve.

It is common this time of year to see pipelines and producers take advantage of weak shoulder-season demand and prices to conduct maintenance. For the past five days, Genscape Inc. estimates that production has averaged a bit under 86.7 Bcf/d. This makes for a roughly 0.85 Bcf/d decline to the previous week, and is more than 2 Bcf/d off from March 31, when production rebounded to what was then a 121-day high.

“Permian production has been in retreat after cash prices cratered into unprecedented negative territory. We are seeing declines across multiple interstate gathering and processing points, as well as their receipts from intrastate systems,” Genscape senior natural gas analyst Rick Margolin said.

Indeed, the persistent weakness in the Permian Basin cash market finally bled into forwards last week, when Waha prompt-month prices plunged to minus 50 cents, Forward Look data shows. After a jump of more than 15 cents between April 4 and 10, Waha May moved up minus 14.9 cents. June jumped nearly 20 cents to 43.8 cents and the balance of summer (May-October) rose 16 cents to 91 cents.

Nevertheless, natural gas prices in the oil-driven Permian will likely remain steeply discounted until more infrastructure comes online to alleviate existing bottlenecks, and some analysts see the low prices continuing even after those pipelines enter service.

“New natural gas pipelines will likely go into service in the second half of 2019 and 2020, alleviating the bottleneck, but natural gas prices in the Permian Basin will continue to suffer from high basis differentials as exploration and production companies pursue growth in oil production,” said Moody’s Investors Service’s James Wilkins, vice president and senior analyst.

With such robust associated gas growth and producers paying as much as $9 to get the molecules off their hands, a natural home for the new supply could be storage. Inventories in the Energy Information Administration’s (EIA) South Central region remain well below the five-year average, and last week’s storage data reflected significant tightening in that region that was likely tied to cheap Permian gas.

Another reclassification to base gas was seen in the Pacific region, where 6 Bcf was injected into storage after a 1 Bcf shift in gas stocks to base gas.

Traders and analysts generally brushed off the report, even as the EIA’s reported build came in much larger than last year’s 20 Bcf withdrawal and the five-year average injection of 5 Bcf. However, the 29 Bcf implied flow (25 Bcf net injection) was lower than estimates that had pointed to an injection in the low 30 Bcf range.

This week’s EIA data was likely a true-up of last week’s overstated injection, according to analysts. “Average the last two weeks together, and everything makes sense,” said Jacob Meisel, head of gas fundamental research at a New York energy trading firm. “Each week in isolation is harder to justify.”

Overall, Bespoke Weather Services viewed the EIA report as neutral. Even though the implied flow was a miss to the bullish side, the firm believes the miss simply negates the bearish miss the market saw in last week’s report. “Even at 29 Bcf, it is still reflective of balances that are currently quite loose.”

Even if next week’s EIA print falls short of the triple-digit mark, injections are likely to rise sharply starting next week, rapidly paring the storage deficits versus last year and the five-year average, according to EBW Analytics. “By the last injection in April, we expect the year/year deficit to be eliminated and the deficit versus the five-year average to be trimmed by more than 150 Bcf, putting downward pressure on the market,” EBW CEO Andy Weissman said.

While pricing hubs across most of the country rose in unison with Nymex futures, markets out West continued to soften as weather conditions remain mild in the region, with daytime highs reaching mostly 50s to 70s but cooler over the wetter Northwest, according to NatGasWeather.

Those wet conditions in the Northwest will likely mean stronger hydro output and lower gas consumption for power demand this summer, a trend already illustrated in forward prices this week at a key pricing hub.

Stout snowpack levels have also been seen throughout the Southwest region that includes California, Nevada, New Mexico and Arizona, according to BTU Analytics. In terms of natural gas power burn equivalent, the firm typically sees hydro generation hit lows in the winter of around 0.4 Bcfe/d and rise to a peak of close to 1.0 Bcfe/d in July in the Southwest. However, higher-than-average snowpack will lead to a divergence from the normal, with an additional roughly 0.35 Bcfe/d of hydro generation expected throughout the spring and into the summer.

Kern River flows have shown resilience throughout the past regardless of hydro generation, according to BTU, “so it is likely Waha pricing will feel the negative effects of increased hydro generation, as a potential route for Permian associated gas will be restricted.”