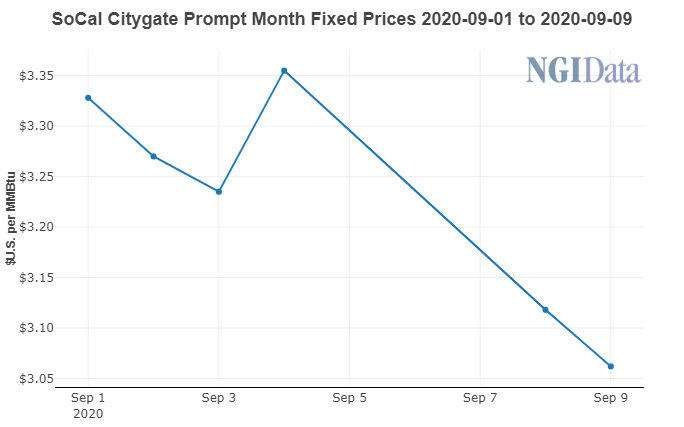 Though operations have since resumed at the Sabine Pass liquefied natural gas (LNG) facility and feed gas has risen, the damage to prices was too much to overcome following a cooler turn in the weather put storage containment risk back in play.

October prices dropped an average 8.0 cents for the Sept. 3-9 period, while November fell 6.0 cents on average, according to NGI’s Forward Look. Pricing for the winter (November-March) also softened, though to a lesser extent as projections for lower production and strong demand kept losses to a minimum. Contracts further out the forward curve bucked the trend, but gains were small.

“Pressure at the front of the curve so far this month is rational with work remaining to be done in terms of end-of-season storage levels,” said Mobius Risk Group.

After a hot July and August, the next couple of months could have a greater-than-normal impact on where inventories ultimately wind up at the end of October. Stocks already are sitting well ahead of previous years. Recent weather models have shown the most heat is remaining in the West, with variability in eastern forecasts, according to Bespoke Weather Services. The South also isn’t expected to see much heat, which should keep cooling degree days near normal and early season heating degree days (HDD) below normal.

“We normally consider HDDs to be ineffective in September, anyhow, given that they are typically marginal enough to not generate true demand,” Bespoke said. “Folks near Denver the last couple of days might disagree, but we digress.”

The latest government storage data did little to move the needle much on the storage overhang. The Energy Information Administration (EIA) reported Thursday that inventories for the week ending Sept. 4 rose by 70 Bcf to 3,525 Bcf, trimming the year/year surplus by 10 Bcf but expanding the surplus to the five-year average by 2 Bcf.

Broken down by region, the Midwest added 29 Bcf to storage, while the South Central added 18 Bcf, according to EIA. This included a 13 Bcf injection into nonsalt facilities and a 4 Bcf build in salts. East inventories rose by 16 Bcf, and Mountain and Pacific stocks each grew by 4 Bcf.

Mobius pointed out that the latest salt injection compares with the prior week’s 3 Bcf withdrawal and an unchanged level of stocks in the same week last year. “None of these metrics is particularly helpful for those wanting a rebound at the front of the curve, and considering there is yet to be line of sight to a consistent string of sub-60 Bcf builds storage indicates containment issues will remain alive and well for the time being.”

The Houston-based analytics firm said rebounding LNG feed gas demand, which has more than doubled from Sept. 1-10 to 6.47 Bcf, is “most certainly” mitigating the impact of declining fall temperatures. Deliveries to Sabine Pass alone reached close to 2.9 Bcf on Thursday. The Hough Gannet LNG vessel was berthed at the facility and expected to be the first to load since Aug. 23, four days ahead of Laura’s landfall.

However, the restart of Sabine Pass has been met “head on” by losses in power demand, according to Mobius. The losses have been magnified by elevated Texas wind generation that has curbed gas demand.

Given the rapid cooldown, participants on The Desk’s online energy platform Enelyst said they are increasing their estimates for end-of-season storage as the next few EIA reports are expected to be stout. Enelyst managing director Het Shah said he’s looking for builds of 78 Bcf, 93 Bcf and 102 Bcf in the next three respective reports. Some participants were projecting even higher injections.

“Let us hope for LNG exports,” said one participant.

Cameron LNG, which took a direct hit from Laura, has remained offline with no date set for resuming operations. The facility has to contend with damaged power lines and other issues in Cameron Parish, LA. As of Thursday morning, Entergy Corp. said around 79,400 customers remained without power in Calcasieu and Cameron parishes, although the utility’s Louisiana subsidiary successfully restarted one power plant in Calcasieu on Wednesday.

Entergy has said it may be late September before power is available to most customers in Southwest Louisiana because of extensive damage to the transmission and distribution systems. However, Enelysts participants said the utility appears to be making progress quickly and some expect restoration could be completed within two weeks.

Recovering LNG demand notwithstanding, the coming span of moderate fall temperatures appears to have the upper hand when it comes to prices.

After trading at $2.60 last week, the October Nymex futures contract settled Wednesday 20 cents lower at $2.406 and lost even more ground after the EIA report was released.

Analysts at The Schork Group said with the October contract now below $2.374, this could open up a possible run toward its $2.321 second support point. Below this level, the firm looks for support at the $2.254 third level of support.

EBW Analytics Group agreed that with such a hefty storage injection Thursday and likely more on the way, the prompt month could fall back into the $2.20 range. The firm noted that machine-driven trading is likely behind some of the erratic price behavior witnessed in Nymex futures trading in recent weeks.

After starting Wednesday off lower, the front month surged early, peaked at $2.48, then fell more than 15 cents to bottom out at $2.328. It ultimately recovered to close six ticks above Tuesday’s final settlement price.

“While DTN still forecasts a lukewarm October on average, any cooler-than-normal surprises could exacerbate price volatility at the front end of the Nymex natural gas curve,” EBW said.

With some late-summer heat on the East Coast, various pipeline maintenance events propped up forward prices across the region.

As for the pipeline work, Nexus Gas Transmission has started work at the Hanoverton Compressor Station in Columbiana County, OH. It has restricted flows by up to 301 MMcf/d on various days throughout September. The Hanoverton station over the past 30 days has averaged 1,170 MMcf/d and maxed at 1,222 MMcf/d, according to Genscape Inc. This does not include days in which operating capacity was limited because of maintenance.

Genscape analyst Anthony Ferrara said flows also would be restricted to a similar amount north of Hanoverton, at the Wadsworth and Clyde compressor stations.

Meanwhile, Columbia Gas Transmission (TCO) is set to perform planned pigging on Line LEX, spanning from West Virginia into Ohio, with impactful restrictions in place for gas days Friday and Wednesday (Sept. 16), limiting up to 275 MMcf/d of receipts and 641 MMcf/d of westbound flow.

On the West Coast, forward market traders appeared to be discounting the recent spate of extreme heat and wildfire risk in California. For two weeks in a row, forward prices throughout the Golden State have fallen significantly at the front of the curve, despite strong gas demand on the Southern California Gas Co. system and preemptive shutoffs by another major utility in the northern part of the state. Instead, forwards appear to be taking their cue from weakening cash prices, which have descended from recent highs though more heat is in the cards later this month.

The weakness could be because demand is finally set to ease a bit in the coming days, with Pacific Gas & Electric Co. crews inspecting lines for signs of damage before restoring power to nearly 175,000 customers in Northern California. The preemptive shutoffs were intended to reduce the risk of downed power lines causing wildfires amid the hot, dry, windy conditions.

“These power shut-offs have not had a notable impact on PG&E’s overall electric demand data, which is coming back down after increasing massively over this weekend in response to the extreme heat wave,” Genscape analyst Joseph Bernardi said.