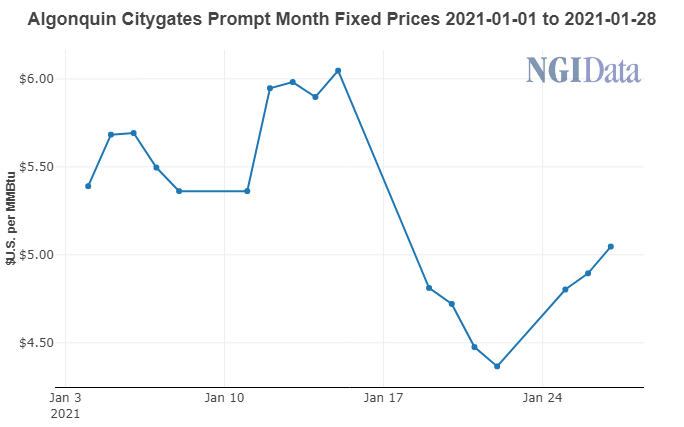 The February natural gas contract rolled off the board Wednesday at an average 22.0 cents higher than where it started the Jan. 21-27 period. The incoming prompt-month March contract jumped 21.0 cents on average, according to NGI’s Forward Look.

Though questions remain about how long the chilly air may linger, and to what extent it may have on storage draws, robust liquefied natural gas (LNG) demand expected to continue through the summer sparked solid gains through the summer (April-October) and winter 2021-22 (November-March).

The double-digit gains along the forward curves were the culmination of three straight days of increases along the Nymex futures strip, which paved the way for the vast majority of U.S. markets to follow suit. Though truly cold weather largely has come up short this winter, the current blast of Arctic air is easily driving the most demand the market has experienced this season.

AccuWeather was keeping an eye on the storm that began pummeling California on Tuesday as it trekked eastward, where it’s to be met with the frigid air coming down from Canada. Forecasters expect the storm to wreak havoc beginning this weekend through early next week across the Mid-Atlantic and Northeast.

“The weather in the Northeast will be downright cold and nasty from Friday to Saturday and, with high temperatures forecast to top out in the mid- to upper 20s in New York City, for example, could rival some of the lowest temperatures of the season so far that were achieved just last weekend,” said AccuWeather senior meteorologist Alex Sosnowski.

Arctic air, such as what is settling in over the eastern swath of the country, is denser than the surrounding air, according to AccuWeather. Therefore, the Arctic air in place across the eastern portions of the Dakotas and over up into Maine “won’t easily be pushed out when the storm approaches.”

Forecasters said the storm may tap into moisture from the Gulf of Mexico and, upon colliding with the Arctic conditions in place, most likely sets up a blanket of snow and ice that can extend for hundreds of miles. The AccuWeather team also would be monitoring for signs that a second part of the storm along the Atlantic coast could develop.

“Should conditions allow that storm to develop, a potent nor’easter could unfold,” Sosnowski said. “With the cold air in place, a nor’easter could stall over the Northeast and have the potential to deliver heavy snowfall in some areas, as well other impacts such as gusty winds and possible coastal flooding.”

This so-called second act of the coming storm is where major weather models are not in agreement. Bespoke Weather Services said the American ensemble data continued to get colder in the overnight run, but the European data shifted “solidly warmer.” This is in stark contrast to a few days ago, when the American model was the warmer of the two.

“Our forecast takes a mid-ground approach for now, though still winds up slightly colder than the long-term 30-year normal for the 15 days as a whole,” Bespoke said. “…It is a tricky forecast with the coming cold fighting against some east/southeast warmth, as small shifts in the pattern can lead to significant changes in projected gas-weighted degree days.”

The Arctic blast is occurring just as the gas market could be at a crossroad for the remaining winter withdrawal season. Mobius said the pending cold shots are a “hopeful sign” for market bulls, but “lurking in the shadows” is the risk presented by the early expectations for next Thursday’s storage number. As final data is collected over the next five days, opinions may be drawn about a sub-200 Bcf withdrawal during a week with normal weather at the peak of heating season, according to Mobius.

“A warmer shift in weather forecasts and a consolidated view that a sub-200 Bcf withdrawal is likely to be reported next Thursday would be a pricing headwind,” it said. “Conversely, validation of the cold and final data pointing to a pull of more than 200 Bcf, plus early data for the Feb. 4 storage week showing further tightening, could be a catalyst for additional tests of upside resistance.”

Participants on The Desk’s online chat platform Enelyst on Thursday offered up a wide range of expectations for next week’s government storage report, but most fell short of the 200 Bcf mark. That’s largely because the latest data disappointed with a below-consensus figure that was far below historical levels.

The Energy Information Administration (EIA) reported a 128 Bcf withdrawal from storage inventories for the week ending Jan. 22. This compares with last year’s 170 Bcf draw for the similar week and the 174 Bcf five-year average.

Ahead of the EIA report, major surveys produced estimates from 127 Bcf to 145 Bcf. NGI modeled a 131 Bcf pull.

Bespoke said the EIA’s 128 Bcf withdrawal was a “much looser number than our data indicated.” NatGasWeather similarly called for a stepper pull in the high 130s Bcf, but pointed out that it was warmer than normal over most of the country and “tricky” to estimate because of the Martin Luther King Jr. holiday.

The Schork Group also weighed in on the backdrop surrounding the latest EIA figure. The firm noted that mean temperatures in the “all-important” Chicago market area averaged 15% above normal. Degree days in Houston plunged by 72% to a mere 37.

Meanwhile, initial EIA estimates showed that LNG sendout fell by 3.3% to a 9.81 Bcf/d average for the week ending Jan. 22. Heavy fog along the Gulf Coast prevented access to some terminals.

On the power front, the Schork Group said week/week, Lower 48 power production from the Edison Electric Institute totaled 77,172 GWh, which is 2.8% lower than the prior week and down 3.7% year/year. Over the last four years, production averaged 77,298 GWh, 2.3% higher than the corresponding four weeks in 2020.

Looking at the EIA data on a more granular level, the Midwest led the way with a 48 Bcf pull from storage stocks, while the East took out 38 Bcf. The South Central reported a 37 Bcf draw, which included a 29 Bcf draw from nonsalt facilities and an 8 Bcf pull from salts. Mountain inventories fell by 6 Bcf, and the Pacific held steady, according to EIA.

Given the warmer turn in the European model overnight, March Nymex futures were several cents lower even before the EIA report was released. Bespoke said given the “lethargic” price action at times during Wednesday’s session, it appears the market was more fearful of the bearish miss.

With the EIA figure now “out of the way,” the focus should begin turning back to weather rather quickly. “We feel the dip here will wind up being bought, assuming our ideas on a colder pattern can verify in the medium range.”

With much of the East Coast dealing with what the National Weather Service (NWS) called “bitter wind chills,” and at least some possibility that more cold is on the way, forward market prices in the region moved sharply higher for the Jan. 21-27 period, according to Forward Look.

The NWS on Thursday said a strong low pressure system over the Western Atlantic would aid in producing gusty northwest winds for the next day or so. Wind chill advisories were in effect across the interior Northeast, where the forecaster said it may feel like 25 degrees below zero at times. In addition, snow showers were to accompany the cold air along immediate coastal sections of New England.

Tennessee Zone 6 200L priced very similarly to Algonquin Citygate, while some interesting market behavior was seen in New York. Forward Look data showed Transco Zone 6 NY February prices falling 15.0 cents from Jan. 21-27 to reach $3.328. Other than a minor pullback in prompt-month prices at the SoCal Citygate, the decrease in New York was the only location to finish the period in the red.

This could be because of the rather large surplus in regional storage inventories. Even accounting for Thursday’s EIA storage report, stocks in the East region are still 6% higher than the five-year average. Inventories, however, have fallen below year-ago levels, now at 641 Bcf, compared with 655 Bcf at this time last year.

Further out the curve, Transco Zone 6 NY moved very closely with other locations in the region, according to Forward Look. March prices jumped 21.0 cents to $2.753, and the summer strip tacked on 17.0 cents to average $2.326. Prices for next winter stayed flat at $4.730.