After four solid weeks of steep increases, natural gas forward prices buckled during the trading period ending Tuesday as the start of the fall season ushered in cooler weather and a decline in demand. October prices plunged an average of 54.0 cents from Sept. 16-21, while November tumbled 55.0 cents on average, according to NGI’s Forward Look. 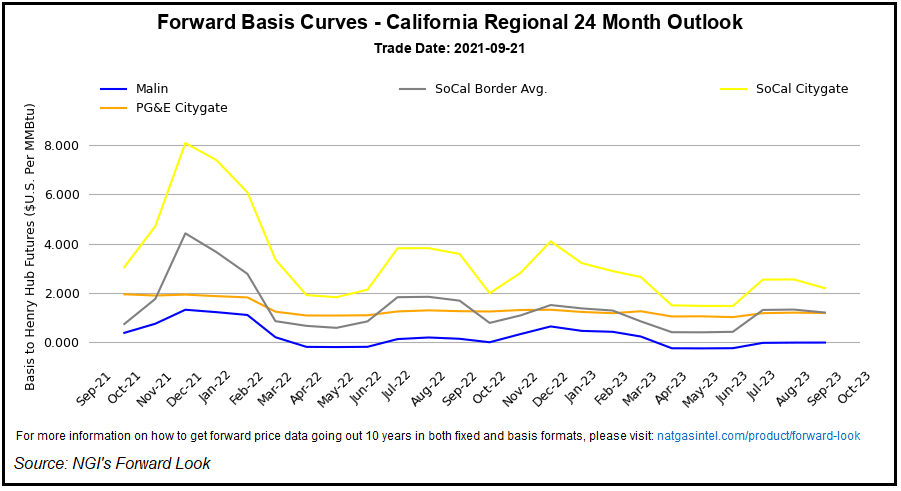 The hefty price discounts extended through the winter strip as the milder weather outlook was seen leading to a string of much larger storage injections than the ones that amassed over the summer. The November 2021-March 2022 strip came off an average 52.0 cents for the period, Forward Look data showed. Summer prices also were lower by an average of 13.0 cents.

Given the quick and steep climb the Nymex futures strip experienced over the past month, at least some pullback was expected in spite of an otherwise supportive backdrop. The arrival of crisper weather across the Lower 48, though, accelerated the declines as temperatures as far south as Texas were forecast to slip to more comfortable levels following the long sweltering summer.

Bespoke Weather Services said though weather is not a key theme for the gas market this time of year, “demand is projected to be so far below normal that it is a consideration here.”  The warmth on tap for the next two weeks, and likely further into October, likely is why the prompt month contract has been weaker relative to the rest of the curve.

“That trend, regardless of flat price, is likely to continue, given the persistence of the warmer pattern,” Bespoke said.

Along with the seasonal decline in temperatures, liquefied natural gas (LNG) demand also has fallen from recent highs despite continued robust demand overseas.

The Cove Point LNG terminal near Lusby, MD, shut down last Monday for planned maintenance that is scheduled to last until Oct. 10.

Volumes also had been lower at the Freeport LNG facility after it lost power during Hurricane Nicholas. The storm made landfall near Matagorda Bay, TX, earlier this month.

Freeport had begun to restart the facility over the past weekend (Sept. 18-19) but ran into some electrical issues. By Wednesday, though, it was receiving about 2 Bcf of feed gas.

The restart of operations at Freeport comes as global LNG demand remains fierce. Asian buyers are pricing gas at exorbitant rates in order to gobble up enough supplies ahead of winter. The market was left woefully short last year.

Europe, meanwhile, has struggled to compete with Asia as it works to replenish storage inventories left short after last winter. A hot summer added to the decline in supply.

The feverish demand and resulting global price spikes have attracted the attention of the International Energy Agency, which called on Russia this week to increase gas availability to Europe, underscoring “its credentials as a reliable supplier to the European market.”

Gazprom PJSC recently completed the controversial Nord Stream 2 (NS2) pipeline and is working to bring it online by the end of the year.

The extreme tightness and sky high gas prices in Europe are eerily similar to the drama that unfolded in Texas last winter during Winter Storm Uri. Several gas suppliers in the region have folded amid the energy crisis.

With domestic prices on the decline, that means U.S. LNG is even more in the money to send supplies of the super-chilled fuel overseas. Analysts see export demand remaining strong throughout the winter months, even with two more LNG export facilities scheduled to come online during that time.

EBW Analytics Group said the abrupt price reversal for natural gas as bulls ran out of steam has led to a bearish technical setup, and the firm sees prices likely continuing to move lower in the next few trading sessions.

“But the move lower is predominantly technically-driven in the aftermath of the torrential runup over the past month,” they said.

Price action on Wednesday was rather tame, with the October Nymex contract settling flat on the day. November edged up to $4.855.

The pause in price action proved brief, however, with the latest government storage report bringing back some of the volatility of the past month. After the last two Energy Information Administration (EIA) storage reports came in bearish to expectations, Thursday’s data was on target.

Bespoke said the figure was almost “dead-on” with its estimate, though not something that should be viewed as a “game-changer.”

Ahead of the EIA report, results of a Reuters survey ranged from injections of 58 Bcf to 82 Bcf, with a median build of 76 Bcf. Bloomberg’s survey showed a 75 Bcf median, with estimates from 68 Bcf to 83 Bcf. NGI’s model predicted an 82 Bcf build.

EIA recorded a 70 Bcf injection in the similar week last year, while the five-year average injection is 74 Bcf.

Bespoke attributed the heftier build versus the market to lower LNG demand, given the Freeport outage. The 76 Bcf injection keeps the market on pace for end-of-season storage levels over 3.5 Tcf, “which is not inherently bearish.”

By region, the Midwest led with a build of 28 Bcf, according to EIA. The South Central followed with an increase of 25 Bcf, including a 14 Bcf injection into nonsalt facilities and an 11 Bcf build in salts. The East region recorded a build of 19 Bcf, while Mountain region stocks rose by 3 Bcf.

With inventories on pace to finish October above 3.5 Tcf, Bespoke said price levels indicate that there needs to be some cold to increase upside risks. This is “something which looks woefully absent over the next few weeks, though thankfully, we are only looking into the first half of October at this stage in the game.”

Futures traders, meanwhile, took the EIA figure as confirmation of continued tightness and brought supply fears back to the front burner given the supportive setup for the winter. The October Nymex gas futures contract hit an intraday high of $5.030 and went on to settle Thursday at $4.976, up 17 cents from Wednesday’s close. November shot up 19 cents to $5.043.

Eyes On The West

Aside from the typical scrutiny on South Central stocks, which are hard to gauge because of the extensive network of pipelines that are not federally regulated and subject to the same transparency standards as other systems, market observers also are keeping a watchful eye on the Pacific region.

After weeks of posting withdrawals because of strong regional demand and limited supply, Pacific inventories were flat for the week ending Sept. 17 at 240 Bcf. Even without another pull, though, stocks were about 23% below last year and 18% below the five-year average, according to EIA.

Oppressive summer heat has boosted gas demand across the West, while an ongoing drought in the region has created supply issues when water levels fell so low last month that a large hydroelectric power plant had to shut down. The region, and Californian in particular, has had to resort to increased power imports, which often come from gas-fired power plants.

The situation has worsened to the point where the Department of Energy recently approved an additional 200 MW of gas-fired power to be called upon when needed in order to avoid a crisis. Withdrawals from the Aliso Canyon storage facility, which are rare since a leak was discovered at the facility in 2015, also have taken place in recent weeks.

The tight conditions have led to volatile trading throughout the West, most notably in California. Both cash prices and forward curves have mounted huge gains in recent weeks and despite a pullback along the forward curve in recent days, a steep premium remains in place.SoCal Citygate October prices fell 27.0 cents from Sept. 16-21 but still sat at $7.851, more than $3.00 above Henry Hub, according to Forward Look. SoCal Citygate November tumbled a far more substantial 57.0 cents to $9.548, while the winter strip was down 40.0 cents to $10.790. Summer 2022 prices averaged $6.35, off 15.0 cents on the week.