A tightening backdrop in the natural gas market – in part because of unrelenting export demand and its impact on domestic supplies – fueled continued momentum for forward prices through the trading period ending March 23. 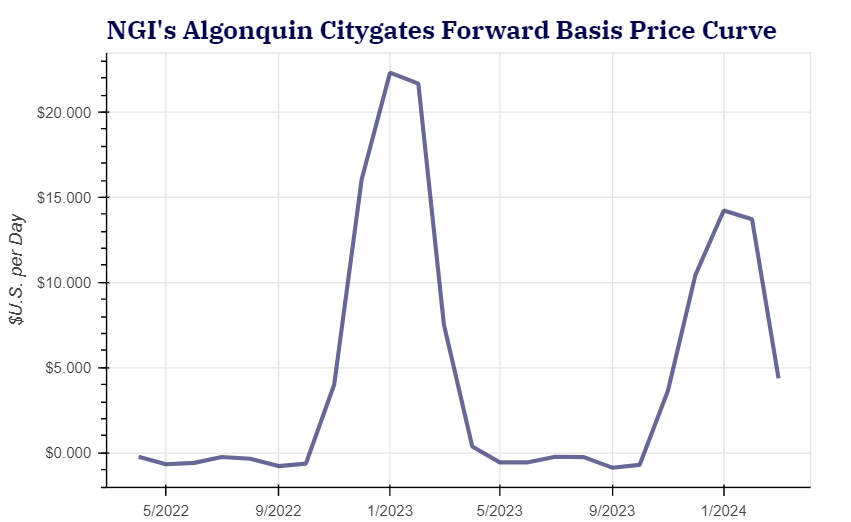 Fixed prices rallied by as much as 25.0 cents for the April contract, with similarly plump increases seen throughout the summer (April-October) and next winter (November 2022-March 2023), NGI’s Forward Look data showed.

The mostly steady gains in the gas market since Russia’s invasion of Ukraine one month ago have lifted benchmark Henry Hub prices well above the $5.000/MMBtu mark for April, traditionally a month in which prices crater as temperatures warm. However, weather also has been supportive of prices as models continue to reflect periods of crisp temperatures that could keep demand elevated longer into the spring season.

There are some discrepancies in the latest weather data, so the amount of continued cold isn’t yet clear. The European model cooled a bit for the period after April 5, while the American model reflected a warmer pattern. Bespoke Weather Services said gas-weighted degree days are projected to be near normal overall for the coming 15 days, with a string of cooler-than-normal weather from this weekend into next week.

“We do not see anything particularly strong, but the step change from a little warmer than normal to now cooler than normal in this time frame is definitely worth noting,” the forecaster said.

Climate models remained “quite tame” looking out into April as well, according to Bespoke. There is still a skew to the warm side, it said, especially in the central/southern United States. However, the pattern is not as warm as it had been earlier this month.

Outside of weather demand, exports continued to track near record highs, with feed gas deliveries to liquefied natural gas (LNG) facilities surprising to the upside amid Europe’s unquenchable thirst for the super-chilled fuel. NGI data showed feed gas volumes back above 14 Bcf on Thursday. However, intake fluctuated throughout the past week amid the startup of Calcasieu Pass and lower volumes at Freeport LNG.

Meanwhile, exports could rise further from Cheniere Energy Inc.’s Sabine Pass and Corpus Christi export facilities. The Department of Energy earlier this month approved an increase in export volumes from the Gulf Coast facilities, equating to around 5 million metric tons/year, or up to 0.72 Bcf/d.

Europe continues to scoop up spot LNG cargoes in an effort to fill storage levels to 80% capacity ahead of next winter, alongside worries that Russia may halt exports to the continent in response to sanctions imposed amid the war. Even before Russia’s invasion, though, Europe faced an energy crisis stemming from a cold winter last year, followed by a hot summer. It competed fiercely with Asia for cargoes, sending prices skyrocketing to then-record highs.

Ultimately, Europe is aiming to wean itself off Russian gas. The European Union devised a 10-point plan to reduce its dependence on Russian gas by one-third over the next year. In the short term, though, energy security and reliability have taken center stage and fueled bullish momentum for global gas prices.

Adding to the supportive backdrop is an unexpected ramp in Japanese LNG demand following an earthquake earlier this month, which shut down a coal plant. Notably, Tohoku Electric Power Co.’s tender for a spot cargo for April to May delivery excluded loading ports in Russia.

Despite robust demand, EBW Analytics Group pointed out that with U.S. LNG facilities typically utilizing the low-demand spring season for planned maintenance, rolling outages may be a limiting factor in the next six weeks.

After a record-setting spring last year, in which pipeline exports south of the border surpassed 7 Bcf/d, March-to-date average exports to Mexico continued to be flat against the previous month, at barely 5.6 Bcf/d, according to Wood Mackenzie. In the preceding five years, the average February-to-March growth rate was slightly above 4%.

Among other factors, Wood Mackenzie analyst Ricardo Falcon-Bautista said still-robust Mexican dry gas output is wrestling an incremental share of demand. So far this week, production was leveling off at 3.3 Bcf/d to reach a five-year high; state-run Petróleos Mexicanos’ (Pemex) total consumption is in lockstep with it, crossing the 2 Bcf/d line.

Wood Mackenzie expects gas-to-gas competition to continue as Mexico enters the summer season. Its strength would depend, to an extent, on Pemex’s ability to maintain today’s operating levels at its major gas processing complexes.

“On the demand side, power burns will likely remain critical as warmer temperatures lead to incremental cooling loads,” Falcon said.

Indeed, power burns were the main culprit in a day/day jump of almost 0.9 Bcf/d on Tuesday to 5.8 Bcf/d. A rebound from Monday’s weakness because of the Mexican holiday celebrating the birthday of former president Benito Juárez resulted in the second-strongest day/day surge of the year, according to Wood Mackenzie.

Too Early To Talk About Storage?

On the supply side of the equation, languishing production and an ever-expanding storage deficit have set the stage for an uphill battle in replenishing domestic inventories this summer. At least for this year, the typical drop in prices that generally accompanies the low-demand spring season may be all but wishful thinking for market bears amid the potential for lower-than-normal stocks ahead of next winter.

Although production has edged higher as temperatures have moderated from the extreme cold levels earlier this winter,  EBW said output remains below early December volumes. Appalachian production continues to lag early winter levels, it said, while gains in the Haynesville Shale and associated gas from oil plays have yet to fully make up for lost gas.

However, EBW acknowledged that dry gas monitors often show phantom early month declines, balanced out by phantom late-month production gains. As such, it may appear that production is rising over the next seven to 10 days.

“We also suspect it is possible that flow monitors in general may be too low” following recent government storage prints, said EBW senior analyst Eli Rubin. “Nonetheless, the lack of production growth has stilted the seasonal natural gas storage trajectory and — unless near-term gains surprise materially to the upside — injection season supply/demand fundamentals may appear tight for the near to medium term.”

On Thursday, the latest round of government data pointed to some loosening in the supply/demand balance.

The Energy Information Administration (EIA) reported that inventories slipped by 51 Bcf during the week ending March 18, a lighter pull than consensus and far below the 70 Bcf pull seen in a range of expectations ahead of the report. Still, the withdrawal compared with last year’s modest 29 Bcf draw. The five-year average for the period is a 62 Bcf withdrawal.

Bespoke said the EIA’s 51 Bcf draw “definitely reflects a looser supply/demand balance than we had accounted for.” However, with prices on the rise after the report, it appears the market views the figure more or less as a “make up” for last week’s miss to the bullish side. Next week’s number is likely looser, according to the forecaster, so there could ultimately be some temporary headwinds soon if correct.

Broken down by region, East inventories were down by 22 Bcf, while Midwest stocks were down by 19 Bcf, according to EIA. South Central stocks fell 12 Bcf, including an 8 Bcf decline in nonsalt inventories and a 3 Bcf pullf from salts.

Given fluctuations in weather during the late winter/early spring, market observers on The Desk’s online energy chat Enelyst noted that the small decline in South Central storage could be because of warm daytime temperatures and chilly overnight lows. Some also noted that production could be higher than models are showing given Texas’ vast network of pipelines that avoid federal regulation. Strong wind generation also likely cut into gas demand.

Total working in gas in storage as of March 18 was 1,389 Bcf, which is 366 Bcf less than last year at this time and 293 Bcf below the five-year average, according to EIA.

U.S. forward prices typically tracked closely with Henry Hub, with few significant deviations across the country. The only exception was in New England, where April basis weakened notably during the trading period ending March 23.

Algonquin Citygate April basis dropped 19.0 cents during that time to reach minus 22.9 cents, according to Forward Look. The decline occurred just as forecasts called for yet another polar vortex to slam the region this weekend.

AccuWeather said though the polar vortex has weakened a bit, it would certainly “pack some punch.” A piece of the polar vortex was forecast to set up shop over southeastern Canada this weekend, with cold air funneling southward.

“A direct discharge of Arctic air will sweep into the northeastern quarter of the nation starting this weekend,” AccuWeather senior meteorologist Brett Anderson said, adding that the cold will persist into early next week.

Temperature departures of 10-20 degrees below average are in store, according to AccuWeather. Typical highs in late March range from around 40 degrees in northern Maine to the low 60s around the Chesapeake Bay. The cold blast is set to peak early next week, with highs struggling to get above the freezing mark.Warmer spring air could arrive by the middle of the week, but AccuWeather warned that more unusually chilly weather could return in early April. As such, Algonquin May basis was only 5.0 cents lower at minus 67.4 cents, Forward Look data showed. Fixed prices for the summer averaged $4.820, up 22.0 cents on the week. The winter strip jumped a far more substantial 61.0 cents to average $19.716 amid the potential for lower-than-normal storage inventories ahead of the peak season.