Natural gas forwards bounced back from a late-February slump as the fallout from Russia’s attack on Ukraine exposed the far reaching consequences of the war. Armed with the potential for chilly weather to return to the Lower 48, April fixed prices rallied by an average 14.0 cents from Feb. 24-March 2, according to NGI’s Forward Look. 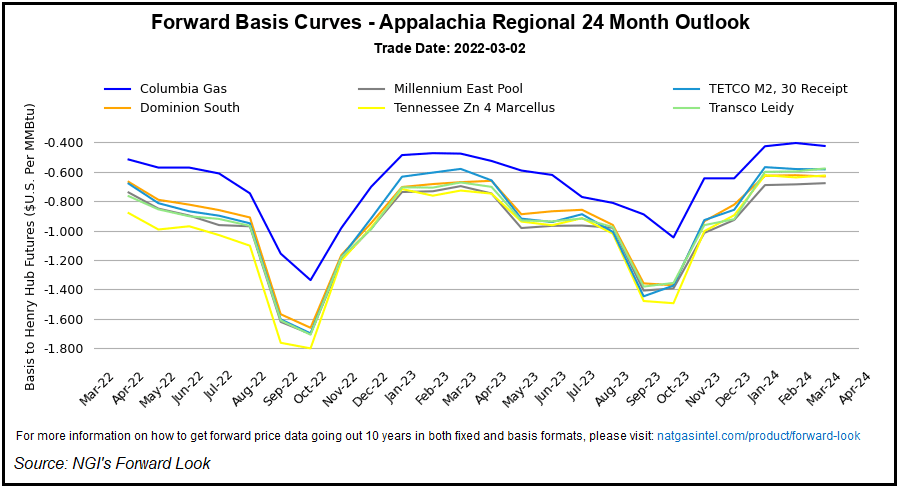 The prompt month’s move higher was similar to the upswing at the benchmark Henry Hub, where April forward prices jumped 12.0 cents during the period to reach $4.763/MMBtu on Wednesday. The summer strip (April-October) also climbed 12.0 cents and averaged $4.840 for the period, while the winter 2022-2023 strip picked up 9.0 cents to reach $4.960, Forward Look data showed.

Basis moves for April were less significant at the majority of U.S. locations, generally trading within a nickel of the Henry Hub. The Northeast proved to be an exception, though, with the arrival of a wintry mix late in the week expected to boost heating demand through the weekend. Temperatures were forecast to plummet and even dip below freezing in some areas.

The larger basis increases also spilled over into upstream Appalachia markets, where production has struggled to fully recover from freeze-offs, and storage inventories continue to draw down amid the continued cold weather.

Is Storage Deficit A Big Concern?

The heftier increases for the winter are significant given that the market is on the cusp of warmer weather.

There are a few weeks remaining in the official withdrawal season and a possibility of more cold later this month. At the same time, the spotlight on Europe’s energy crisis has been amplified given the conflict in Ukraine.

As for U.S. inventories, the deficit versus the five-year average expanded a bit with the latest round of government data. The Energy Information Administration (EIA) reported a 139 Bcf withdrawal from storage for the week ending Feb. 25, which left stocks at 1,643 Bcf. This is 216 Bcf below year-ago levels and 255 Bcf below the five-year average.

Broken down by region, the Midwest led with a steep 46 Bcf decline in inventories, according to EIA. The East withdrew 38 Bcf, and the South Central pulled out 35 Bcf. This included a 30 Bcf drop from nonsalt facilities and 5 Bcf from salts. Pacific stocks slipped 12 Bcf, while the Mountain fell 9 Bcf.

Bespoke Weather Services said the EIA’s net 139 Bcf draw “does not materially alter our view” of the storage trajectory moving forward, End-of-season storage levels are expected to fall somewhere in the 1,300-1,400 Bcf range.

This, of course, depends on how the weather shakes out through the rest of March. The latest models showed a strong ridge over Alaska pushing air that was “quite cold for this time of year” into the Lower 48. The chilly air may target the middle of the nation and have impacts that could reach into the South and East, according to Bespoke.

“The constant warming of the near-term outlook does give us some pause, as far as being confident in the intensity of the mid-month colder pattern, but we are finally seeing some progression forward of the cold in the forecast,” the forecaster said.

Bespoke expects the colder pattern to remain in place at least until March 20, after which the Alaskan ridge may relax, allowing for some milder air to take hold again.

An analysis by EBW Analytics Group found that all of the recent storage tightening could be attributed to frigid January and February weather. Furthermore, structural, weather-normalized fundamentals may be looser than the market recognizes.

There is no immediate fundamental forcing mechanism to pressure prices lower — and the storage trajectory remained 300 Bcf below the five-year average in early March, EBW noted. And yet, “the flattening and modest narrowing of the storage deficit may still yield modest bearish fundamental pressure on the April contract.”

However, the road ahead for Nymex gas is likely to remain volatile.

Notwithstanding the lack of a strong, direct fundamental connection between the evolving war in Ukraine and U.S. natural gas, Henry Hub futures appeared to be the beneficiary of rising bullish sentiment, according to EBW. Indirect fundamental linkages between soaring global energy prices and US natural gas, meanwhile, point in opposite directions, it said.

“In a scenario with a low natural gas storage trajectory (probable) and an extreme cold winter (less likely), there is a bullish tail risk that Nymex futures may need to rise to global levels to avert domestic shortages,” Rubin said.

If there is a 2-4% bullish tail risk of extreme upside, spiking European Title Transfer Facility (TTF) prices, which briefly surged above $65 on Thursday, may more directly impact the clearing price of natural gas, according to the analyst.

This week’s escalation in TTF pricing that bled into U.S. markets is a perfect example of how the conflict may influence domestic pricing, especially as there is little ability to further ramp up liquefied natural gas (LNG) exports to Europe. On Thursday, the April Nymex futures contract gave back a few pennies and settled at $4.722, however, this was more than 30.0 cents above Monday’s close.

“Still, these small odds should be heavily discounted and do not appear to be priced into the market,” Rubin said.

Over the next month and a half, EBW said recent EIA production data reflects a slower realized growth rate in December. This may indicate downside risk to the firm’s “ambitious” 4.25 Bcf/d December 2021-December 2022 production growth projections. After adjusting for post-Ida Gulf of Mexico supply rebound and seasonal Appalachian growth, 4Q2021 output gained at only a 3.2 Bcf/d annualized pace.

“We anticipate increasing growth rates out of Texas, New Mexico, Louisiana,” Rubin said. EBW also expects modest growth (reversing declines) across the Bakken and Niobrara shales and in Oklahoma, “helping to pick up the pace,” according to the analyst. “Tremendous” seasonal gains for Appalachian output also remain likely in 4Q2022.

“In spring and early summer, however, while output may pick up – and could potentially still exceed market expectations, medium-term growth may not be sufficient to assuage low storage trajectory fears, fueling strong buying of the 2022 injection season strip,” Rubin said.