Dragged lower by an upward swing in production, moderating weather and an ongoing curtailment of feed gas deliveries to the Freeport LNG facility, natural gas forward prices crumbled during the trading period from Sept. 15 to Sept. 21. Steep declines of more than 70 cents extended from the October contract through the winter season (November-March), while the summer strip (April-October) averaged more than 50 cents lower, according to NGI’s Forward Look. 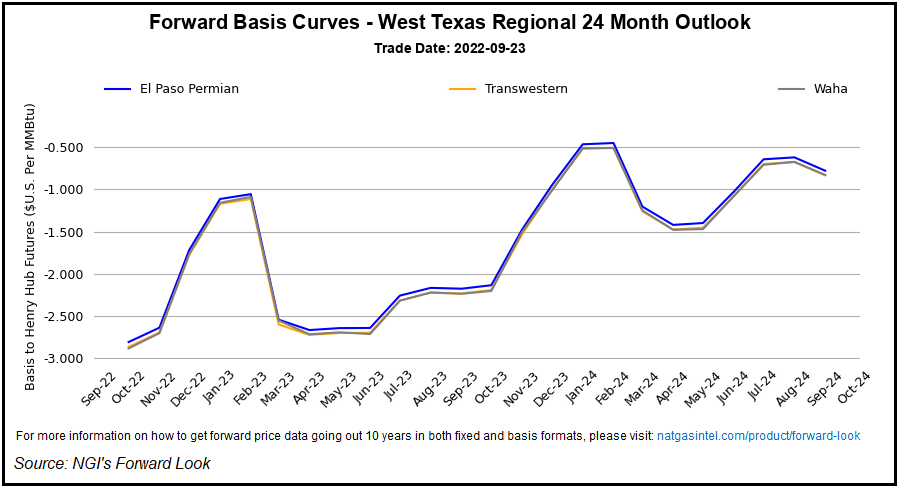 Notably, there was a wide range of price handles for the October contract with prices as low as $3.465/MMBtu at Nova/AECO C in Western Canada to as much as $8.675 at PG&E Citygate in northern California. Of course, it’s the shoulder season and higher prices should arrive at the onset of the winter. The notoriously volatile Algonquin Citygate on Wednesday stood at only $6.717 for October but nearly doubled for November and averaged $27.092 for the winter, Forward Look data showed.

Among the cheapest locations for U.S. gas was at the Waha Hub in the West Texas portion of Permian Basin. October prices at Waha slid $0.72 on the week to average only $5.058, according to Forward Look. This is $2.72 below the benchmark Henry Hub. Importantly, these steep discounts extend through next year.

Why Is Gas So Cheap At Waha?

Several reasons explain the steep basis discount at Waha, a location with growing relevance for the Mexican gas market.

Production rates in a region, in addition to the availability of infrastructure to transport natural gas to high-demand regions, can influence regional gas prices. Recent pipeline maintenance in the Permian has contributed to a wider spot price difference between Waha and the Henry Hub, researchers at the Energy Information Administration (EIA) pointed out.

For example, on May 2, gas flows out of the Permian on Kinder Morgan Inc.’s Permian Highway Pipeline decreased, and Waha prices fell $1.82 below the Henry Hub price. Last month, maintenance on the El Paso Natural Gas Pipeline reduced flows from West Texas into the Desert Southwest and California, contributing to a Waha price that was $1.78 lower than the Henry Hub price on Aug. 26. Just last week, on Sept. 16, Waha dropped $2.06 below Henry Hub amid rampant Permian production and declining demand in some downstream markets.

For forward markets, the discounts are the result of a more structural change in market fundamentals.

As such, given limited transportation capacity to transport gas to consuming centers, producers sold their natural gas at discounted prices. Notably, spot prices even slid into negative territory at several points during this time.

However, given ongoing production growth in the Permian amid lofty oil prices, pipeline capacity is quickly running thin again. Market observers have said it could be as early as this upcoming spring when Permian pipelines reach their max.

Midstream companies have wasted no time in capitalizing on the opportunity to boost their throughput. Kinder Morgan announced plans to add another 550 MMcf/d of capacity to the Permian Highway, while discussions also are taking place to add 570 MMcf/d of takeaway to GCX. Devon Energy Corp., EnLink Midstream LLC, MPLX and WhiteWater also announced plans for the 2.5 Bcf/d Matterhorn Express Pipeline greenfield project.

“Since April 2022, additional pipeline projects out of the Permian have been announced that would expand pipeline takeaway capacity by about 4.2 Bcf/d by the end of 2024,” EIA researchers said.

Supply is growing in other basins as well.

The recent ramp in output, long coming after a sluggish summer, has been a contributing factor to the recent decline in forward prices. After fluctuating in the mid-90s Bcf/d through much of the summer, production escalated to the high 90s Bcf/d by August. Notably, output has reached 100 Bcf/d on a couple of occasions this month.

“A seeming production surge into the end of the month adds to the list of potential near-term bearish catalysts for natural gas,” said EBW Analytics Group senior analyst Eli Rubin.

And with further growth ahead, storage inventories as well as the drilled but uncompleted (DUC) well count should improve. Similar to underground storage, DUCs also are at historic lows.

Recent government inventory data already reflects some loosening in the supply/demand balance. The EIA on Thursday reported a 103 Bcf injection into storage inventories for the week ending Sept. 16. This was on the high end of market expectations ahead of the EIA report and easily surpassed both last year’s injection and the five year average build.

Mobius Risk Group said the 26 Bcf contraction in the year/year storage deficit is notably less than the 40 Bcf reduction posted for the storage week ending Aug. 25. However, the 103 Bcf injection was a build over the century mark, “and this is a level the market is apt to become excited by.”

Whether this threshold is breached in the next EIA report warrants attention, according to Mobius. A string of such builds would decidedly favor market bears through the doldrums of fall demand.

“Daily storage data argues for as much, but a word of caution as outliers have a tendency to be reversed in subsequent reporting periods,” Mobius said.

Regarding the improved storage picture, Rubin said EBW’s most-likely end-of-October storage outlook calls for 3,421 Bcf in stocks. This is slightly bullish relative to market consensus — and still builds in a “startling” 139 Bcf (3.8 Bcf/d) decline in the storage deficit versus the five-year average.

The analyst noted that at various points this year, a bearish near-term outlook has failed to materialize amid a persistently bullish weather backdrop. “A similar bullish shift in the weeks ahead could quickly send Nymex futures back to retest recent highs,” he said.

After trading sideways in recent days, Nymex Henry Hub prices plummeted on Thursday’s storage news and continued to decline on Friday. The October contract closed out the week at $6.828, off 26 cents from Thursday’s close.

For a while still, it likely will be factors other than temperatures moving the price needle.

NatGasWeather said cooling demand would remain elevated over Texas, the South and Southeast for a few more days while some areas farther east could see light heating needs. By the first week of October, a warmer-than-normal pattern should emerge over much of the country but likely will not lead to significant demand for cooling.

The market also continues to monitor a strengthening tropical cyclone in the Caribbean, especially since some of the weather data forecasts it to arrive into the Gulf of Mexico (GOM) next week, then into the U.S. Gulf Coast thereafter. NatGasWeather said every new model run brings a different scenario, “highlighting there’s a lot of spread on where the cyclone goes, as well as the intensity of it.” Some data suggest it would make landfall along the Gulf Coast as a major hurricane.

“Potential impacts are difficult to predict, but the past several years have shown the net effect has been more bearish than bullish by slowing LNG exports and the loss of demand through cooler temperatures and power outages,” the forecaster said.

To the exceptionally bearish side would be if a strong hurricane led to a prolonged outage of a U.S. liquefied natural gas export terminal, according to NatGasWeather. To the bullish side could be lost production in the GOM and the Gulf Coast.

The National Hurricane Center on Monday said Hurricane Ian continued to quickly intensify, with maximum sustained winds of 100 mph. On the forecast track, the storm would move near or over western Cuba through early Tuesday. Ian then would likely emerge over the southeastern Gulf of Mexico on Tuesday, pass west of the Florida Keys later in the day and approach the west coast of Florida on Wednesday into Thursday.Meteorologists largely favor an active back half of the tropical season, Rubin noted. “If accurate, a natural gas market exquisitely balanced on a precipice and prone to volatility with price-inelastic demand and supply curves near current levels could be further buffeted by rapidly shifting external market conditions.”