A balmy weather outlook that was seen potentially extending through the first third of December weighed heavily on natural gas market sentiment during the Nov. 12-18 period, sending forward prices crashing down by an average of 36.0 cents, according to NGI’s Forward Look. 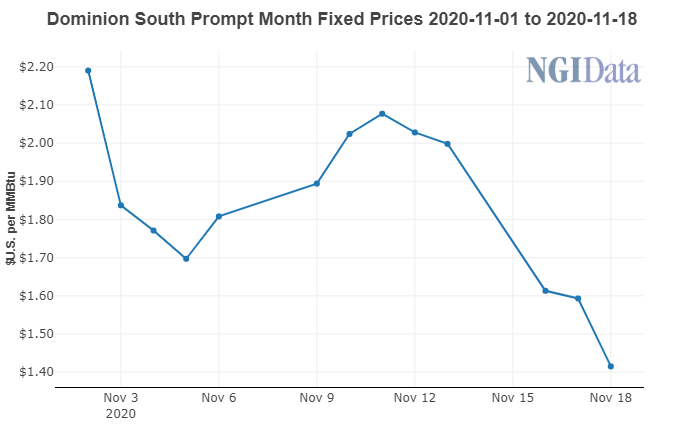 Similar to the prior week, the steepest losses occurred in Appalachia. However, this time, the declines extended farther downstream into the Northeast, where warmer-than-normal temperatures were forecast to rule with highs of 40s to 60s.

The deep nosedive in forward markets occurred on the heels of a similarly sharp decline along the Nymex gas futures curve. Benchmark Henry Hub December futures plunged 27.0 cents from Nov. 12-18 to reach $2.712, and the balance of winter tumbled 24 cents to $2.784. Unlike last week when the biggest action was limited to the winter months, this week’s double-digit decreases spilled over into next summer and the winter of 2021-2022 as well.

The recent losses are attributable to warmer-than-normal weather forecast shifts and a collapsing winter contract risk premium, according to EBW Analytics Group. Technical trades further helped drive the extent of losses early this week, which far outpaced the rate of fundamental weakening.

“From a purely fundamental perspective, a loss of 9-10 cents — roughly one third of the December contract meltdown on Monday (Nov. 16) — would be more justifiable,” EBW said.

Mobius Risk Group agreed that much of the downward slide since the beginning of November has been a function of speculative traders being forced out of positions. This theory, it said, is supported by Commodities Futures Trading Commission data that showed elevated net length heading into the month.

“For consumers, this is a cautionary note, as the belief that ‘prices have now normalized’ does not fit with underlying fundamentals,” Mobius said.

The producing community is likely uneasy seeing the “premium” calendar strip dipping back near levels that many find insufficient to generate acceptable returns, according to Mobius. There is still a great deal of winter withdrawal risk remaining, and the firm said even the next few days could be interesting with the market set to break for the Thanksgiving holiday on Wednesday, “which coincidentally is the same day the December contract expires.”

Mobius pointed out that the back of the curve has not budged much over the past week despite the front-end fireworks. For example, the Calendar (Cal) 2022 strip closed Wednesday at $2.736, and since the first of the month, this tenor has drifted a “reasonably benign” 6 cents lower.

The Cal 2023-2025 strips settled Wednesday with respective closing prices of $2.569, $2.541 and $2.545, but this doesn’t necessarily mean producers are able to de-risk a nickel above the $2.50 barrier, according to Mobius. Furthermore, “end-users who would be well served to consider bringing these lower prices forward are likely uninterested and will remain so until the front of the curve finds some stable footing above $3.00.”

The weakness along the Nymex curve and across forward markets comes despite steadily strong export demand. NGI data showed feed gas deliveries to U.S. liquefied natural gas (LNG) terminals climbing to 10.68 Bcf on Nov. 13 and 14 but then falling below 10 Bcf after some equipment issues at the Freeport LNG terminal. Feed gas flows quickly recovered, though, and by Friday, were holding near 10 Bcf.

“Core fundamentals remain resolutely bullish even as the second-warmest November in history has pulled prices lower,” EBW said. “As the market approaches the heart of the winter heating season, a turnaround to even normal temperatures — much less a bullish outcome — could be sufficient to send Nymex winter contracts notably higher.”

How much prices have to climb in order to return to the $3.00 mark became an even greater obstacle on Thursday when the latest storage data underscored the lower weather demand regime amid rising supplies.

The U.S. Energy Information Administration (EIA) said inventories for the week ending Nov. 13 rose by 31 Bcf. The stout injection far surpassed even the largest of projections ahead of the EIA report and compared with a 66 Bcf withdrawal for the comparable period last year.

Despite the hugely bearish EIA injection, Genscape Inc. said compared to degree days and normal seasonality, the 31 Bcf injection appears tight by 3.7 Bcf/d versus the prior five-year average and continues the trend of tight weather-adjusted storage reports since Sept. 17.

“The punchline is that very bearish weather can easily outweigh a bullish ‘weather-adjusted’ fundamental backdrop, especially in the winter,” Genscape said.

Looking past a “horrific” week for gas pricing, Tudor, Pickering, Holt & Co. (TPH) analysts said producers aren’t doing themselves any favors by boosting production more than 2 Bcf/d week/week. The bump in output, which reached the highest weekly level since April, was compounded by an incremental 0.8 Bcf/d of imports from Canada.

“After factoring in current forecasts which show warmth extending into mid-December, we are still biased long against a 2021 strip, which has gapped down to $2.70/MMBtu,” TPH analysts said. “At these levels, we see attractive asymmetry, particularly over the winter months, and expect a meaningful rebound if some blue starts finding its way onto the weather maps.”

Broken down by region, the South Central led the way with a 13 Bcf build into stocks, including 8 Bcf into nonsalt facilities and 5 Bcf into salts, according to EIA. The Midwest added 12 Bcf into inventories, and the East added 11 Bcf. Both the Mountain and Pacific regions withdrew less than 5 Bcf.

As evidenced in the latest string of EIA storage stats, production has surprised to the upside in recent days and stands to hold some bearish pressure on the market.

Genscape said on Tuesday that production hovered around the 90 Bcf/d mark for the first time since the end of April.

“It hasn’t yet returned above that 90 Bcf/d level, but the recent five-day average (subject as always to revisions) is hovering at 89.6 Bcf/d,” Genscape analyst Joseph Bernardi said. “Northeast production has rebounded significantly over the last several weeks, fueling the gains.”

Bespoke, however, put U.S. output at 92 Bcf by Thursday.

Looking ahead, though, Bernardi said there are several regions that could be in store for declines. While Bakken Shale production fourth quarter to date has fully bounced back to pre-crash 1Q2020 levels, Genscape is expecting these gains to reverse slightly through the end of the year and 1Q2021.

“We are not expecting anything as extreme as the 2Q2020 drop” and the firm’s forecast is not calling for monthly average production volumes to fall below the 2019 mark through the rest of this winter, according to the analyst. However, it is expecting Bakken production over the next month to reveal the September-November volumes to be “the crest of a wave, with volumes falling back into the range of 105%-110% relative to 2019.”

Drilled but uncompleted wells completion and operator drilling activity are risks for the near-term Bakken outlook, according to Bernardi. Denver-Julesburg (DJ) production already started a general decline since July, with production tapering off since then.

“As with the Bakken, we are expecting a soft decline here for the rest of winter,” Bernardi said.

Producer investment in 2021 is still a source of uncertainty, but Genscape still expects DJ production to remain above 2019 levels through the end of winter.

Permian production has been the steadiest of these regions over the last several months, according to the firm, and more of the same is expected through winter. While this translates to roughly even numbers year/year for 1Q2021 versus 1Q2020, Permian volumes are projected to remain above 110% of their 2019 average for the rest of this season.

Western Canadian output surged back in October, but volumes so far this quarter are still running below those from 2019, according to Bernardi. “We are expecting these year/year decreases to continue through the winter due to lower year/year rig counts when comparing summer 2020 to summer 2019.”

Perhaps the biggest uncertainty facing natural gas, and the broader energy market, has nothing to do with weather, LNG or production. Instead, the recent surge in Covid-19 cases threatens to once again bring local economies to a standstill.

The number of confirmed cases in the United States climbed more than 62,000 day/day to 11.7 million on Friday, with the number of deaths rising by 922 to 252,555, according to Johns Hopkins University.

In a sign of the times, Jefferies LLC reported that online retail traffic increased sharply during the second week of November, pushing the seven-day average to a fresh cycle high. However, the strength was not corroborated by other consumer indicators and looks to be driven by early Black Friday events.

The spike coincided with Walmart’s second of three Black Friday events held from Nov. 11 to 14, according to Jefferies. “Amazon’s Prime Day back in October generated a similar spike in online retail traffic.”

Other gauges of consumer activity were not as robust. Foot traffic continues to move sideways and restaurant activity has declined notably in the past three weeks, Jefferies said. Holiday shopping surveys from National Retail Federation and Gallup suggest spending will likely be down compared to last year.

Jefferies’ real-time labor market indicators had improved considerably in the past one to two months, but that momentum faded last week. Web traffic to unemployment portals increased for the first time in six weeks, and total work hours have levelled off, it said. Meanwhile, new job postings have declined for two consecutive weeks and are at the lowest level since June.

Positive momentum continues in the industrial sector, though. Retail inventories remain well below pre-Covid levels, and the same is true for housing inventories, which have declined to the lowest level since the 1960s.

“Inventory restocking is already underway, but has further room to run in our view,” Jefferies said. “As a result, we expect the manufacturing momentum to be sustained, even if consumption growth hits a speed bump in the fourth quarter.”