A week of storms that left demand rather limited across the country did little to spark volatility in natural gas forward markets. Prices throughout the curve swung only a few pennies in either direction at the majority of market hubs as temperatures remained rather mild for yet another week, according to NGI’s Forward Look. 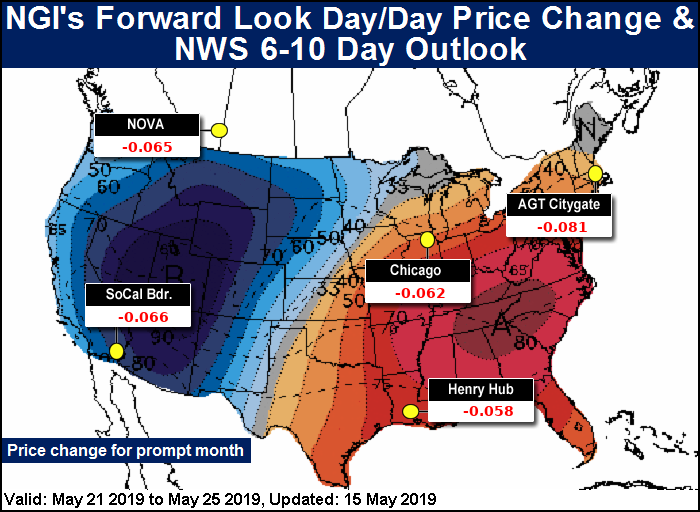 Nymex gas futures traded similarly throughout much of the week, with Wednesday’s session bringing the most significant day/day change as the June contract tumbled nearly 6 cents. The rest of the May 9-15 period saw swings of less than 4 cents each day. Ultimately, the prompt month rose just six-tenths of a cent over the four-day trading period to $2.613, while July inched up just 0.3 cents to $2.634.

The latest weather outlooks showed a slight increase in total gas-weighted degree days, although much of this was back-weighted in the European ensemble data, which showed heat fading toward the very end of the month, according to Bespoke Weather Services.

“This is something that, given our expectations heading into June, we believe is what should happen,” Bespoke chief meteorologist Brian Lovern said. “We just have a lot of stronger heat to wade through the next couple of weeks before getting there, as a strong upper level ridge forms in the eastern United States thanks to a persistent cooler trough dumping into the West.”

This weather pattern is expected to promote widespread highs from the upper 80s to low- and mid-90s in the southeast quadrant of the country on multiple days during the upcoming period, according to Bespoke. Storminess was forecast to continue in the middle of the nation, however, keeping areas from the western Midwest to Texas from participating as much in the upcoming hotter pattern, the firm said.

Nevertheless, past years have seen widespread heat with little forewarning, and this could be a risk this year as well, according to EBW Analytics.

“Texas is a big question near-term given enormous power sector burn. Texas turns warmer, and demand could jump. Texas stays cool, and it will be hard for national power burn to rise sharply,” EBW economist Eli Rubin said on Enelyst, an energy chat room hosted by The Desk.

In a bullish scenario, prices could bump heads with $3 if the market gets enough heat, and with production growth likely to lag demand growth during the next few months as producers stick to their word on holding back output, the market could tighten considerably, Rubin said.

In the meantime, the mild weather is seen as further improving storage deficits. The Energy Information Administration (EIA) on Thursday reported a 106 Bcf injection into storage inventories for the week ending May 10, boosting overall stocks to 1,653 Bcf. The reported build was just 2 Bcf above last year’s build for the same week but well above the 89 Bcf five-year average injection, according to EIA.

Estimates ahead of the EIA report were near the actual print. Intercontinental Exchange EIA Financial Weekly Index futures settled Wednesday at 105 Bcf, while NGI’s model predicted a 102 Bcf injection.

Broken down by region, the South Central reported a 32 Bcf injection, including a 25 Bcf build in nonsalt facilities and a 6 Bcf injection into salts. The East added 31 Bcf, the Midwest injected 27 Bcf and the Pacific rose by 12 Bcf, according to EIA.

With working gas in storage at 1,653 Bcf, inventories were 130 Bcf higher than last year but 286 Bcf below the five-year average, EIA said.

The 106 Bcf build was dead on with Bespoke’s estimate, and balance wise is tighter than last week’s 85 Bcf build. The two-week average versus the five-year average balance implies just over 4.0 Tcf at the end of the season, “though weather adjusting can be more difficult in these low demand times of the year.

“While 4.0 Tcf is probably unrealistic, it shows that we still need to see material improvement in balances to avoid a large storage total heading into winter,” Lovern said.

Already, April was a record year for storage injections, and May could be on its way to setting its own high. Analysts agree that another triple-digit injection is likely to be reported next week, and hefty builds could continue for the next few weeks.

“Although June will be highly weather dependent, it may not be far off the mark either,” Rubin said.

That said, liquefied natural gas (LNG) exports are set to ramp up this summer. On Tuesday, Sempra Energy’s Cameron LNG export facility off the Gulf Coast started production at its first train. Phase 1 of the project includes the first three liquefaction trains to enable the export of 12 million metric tons/year (mmty), or 1.7 Bcf/d.

Completion of the second and third trains has been pushed back to the first half of 2020, with longer construction schedules and commissioning for those units, Sempra management said during a quarterly conference call earlier this month.

Meanwhile, the fifth train at Cheniere Energy Inc.’s Sabine Pass facility and the first train at its Corpus Christi facility in Texas will be exporting this summer after achieving first production earlier this year. A second production unit at Corpus Christi is in the commissioning phase and expected to introduce feed gas “in the coming weeks,” according to CEO Jack Fusco.

Substantial completion for Train 2 is estimated in the second half of the year, while construction on Train 3 continues and was about 52% complete at the end of March.

Prior to Wednesday, the only other time this nomination point has posted non-zero scheduled flows was on gas day April 24, with roughly 25 MMcf of gas delivered to the “Stratton Ridge (To Freeport LNG)” meter. However, the firm’s “power line monitoring at the facility indicates that the facility’s liquefaction engines are not running at this time,” Genscape LNG analyst Allison Hurley said.

Freeport reached 93% completion during the first quarter and is scheduled for initial production for the first three trains between 3Q2019 and 1Q2020, management said.

Regardless, Genscape believes that this Gulf South location will be the only reporting interstate pipeline meter where nominations will provide some visibility into Freeport feed gas volumes; additional pipeline connections to the liquefaction facility will be provided via non-reporting intrastate pipelines.

Given the lack of clarity in feed gas flows into Freeport LNG and with other unknowns as these projects begin exporting, “there is a lot of uncertainty around the exact timing of LNG projects coming online and given their magnitude, could make a huge difference. We think the market may be underestimating how much LNG demand is coming online later this year,” Rubin said.

Het Shah, managing director at Enelyst, said this is especially true considering that LNG export facilities are able to run above their design capacity. “I’ve heard that most of the facilities will restate their available capacity three to five years after operation, i.e. once they fully test and optimize operations.”

With the way the market is shaping up, many analysts may have to tighten their outlook relative to what people were putting out just a few months ago, according to Rubin. A bounce in spot gas prices in Europe and carbon price rallies have also improved the outlook for LNG. This “could point to bullish revisions later this summer.”

The May 9-15 period was no doubt a snooze-fest, but a handful of pricing locations in and around the Permian Basin managed comparatively hefty increases at the front of the curve as demand was on the rise in the region.

The gains in this part of the country come as power burns are poised for gains next week as the first semblance of above-normal temperatures this summer are starting to show in forecasts, according to Genscape. The firm’s meteorologists project net cooling degree days (CDD) starting to creep above seasonal norms starting May 23.

From there through May 28, the forecast for CDDs increases into the 50-plus range, which is about 63% above normal. The vast majority of the gains are weighted towards the Southeast/Mid-Atlantic and Midcontinent regions, the firm said. “Midwest and Northeast markets may see a few days of above normal temperatures, but not radically so,” Genscape senior natural gas analyst Rick Margolin said.

Genscape’s daily macro supply/demand model is forecasting Lower 48 power burns to rise from Wednesday’s estimated 26.1 Bcf/d to a high of 31.7 Bcf/d by May 24.

ConocoPhillips swung to a third quarter loss, as oil and gas production curtailments made in response to the coronavirus pandemic’s impact on energy demand curbed revenue. The Houston-based super independent, however, has recovered ground in recent months and is going on offense in the Permian Basin with its planned acquisition of Concho Resources Inc., a…