Natural gas July forward prices rose a nickel on average, although uncertainty about long-term weather trends and current mild weather in most of the country left several markets in the red for the June 6-12 period, according to NGI’s Forward Look. 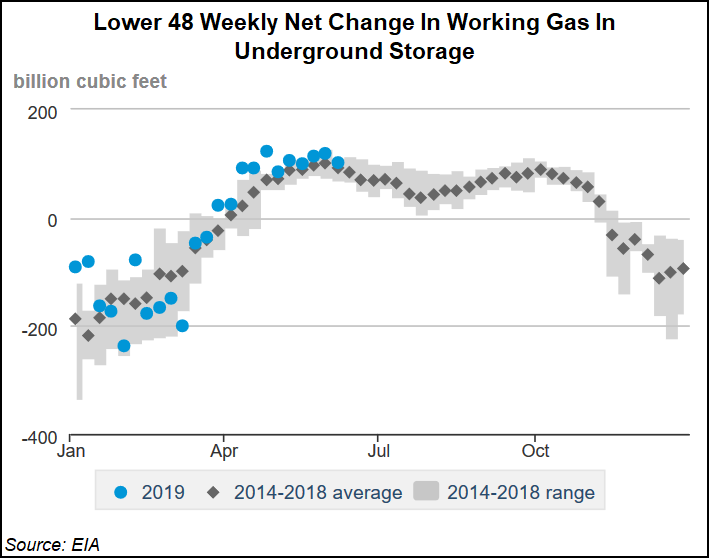 Gains and losses at the vast majority of market hubs were limited to less than a dime, a trend also seen along the Nymex futures curve. The July contract steadily rose — albeit very slightly — from Friday to Tuesday, but then retreated a bit Wednesday after some of the latest weather data backed off its earlier warmer shift.

The July Nymex contract ultimately rose 6.2 cents from June 6-12 to reach $2.386, with similar gains seen for the August and balance of summer (July-October) contracts.

The overnight Wednesday weather data took another bearish turn as both the American and European models trended slower with the return of ridging into the South and East, according to Bespoke Weather Services. The models still showed such a pattern at the end of outlooks, but “for now it appears to be just a timing change in the modeling as opposed to a fundamentally different pattern,” Bespoke chief meteorologist Brian Lovern said.

The early morning American ensemble data set shifted a bit hotter in the 11- to 15-day forecast compared to the overnight run, so Bespoke said it would be watching the midday run closely to see if it moved back in that direction as well. “We feel the pattern signals still argue for some late-month heat risks as the El Niño state should back down for awhile, similar to what we saw in the pattern in the second half of the month of May. Best chance of heat would be in the South, occasionally migrating up into the Mid-Atlantic as well.”

The midday Global Forecast System model trended back a little hotter compared to Wednesday night’s run but wasn’t as hot as it had been. “It’s important to mention that while the GFS isn’t quite as hot” as Wednesday, it’s still noticeably hotter than the European model late next week into late June, “highlighting there remain differences that need to be resolved, hopefully before the weekend break,” NatGasWeather said.

With June heat still not much to write home about, all eyes were on Thursday’s Energy Information Administration (EIA) storage report. The EIA reported a 102 Bcf injection into storage inventories for the week ending June 7, which was slightly smaller than expected but in the broader range of estimates. Most projections had clustered around a build near 110 Bcf, with NGI estimating a 108 Bcf injection.

The injection was larger than both last year’s 95 Bcf build and the five-year 92 Bcf average injection. The storage data provided an initial modest uplift for natural gas futures prices, trimming earlier losses by around 1.5 cents. However, tt didn’t take long for traders to digest the storage data, and prices quickly resumed their slide. The July gas contract ultimately settled Thursday at $2.325, down 6.1 cents. August fell 5.9 cents to $2.322.

With prices remaining in the red, there was further downside risk ahead, according to Flux Paradox LLC President Gabriel Harris.

“The three-day natural gas price rally Friday through Tuesday just set up the market for a short opportunity,” Harris said on Enelyst, a chat room hosted by The Desk. “I don’t think we’re done exploring new price lows yet. I think new lows will come as the supply/demand balance is still loose.”

Thus far, lower prices have not made the weather-adjusted injections look any tighter, which starts to cause reasonable doubt in the market on the whole coal-to-gas switching mechanism, according to Harris. “The market will need dramatic evidence that the price-switching mechanism is at full strength before a bottom occurs.”

However, Bespoke said balance wise, the 102 Bcf injection was considerably tighter than last week’s loose 119 Bcf print, giving the firm more confidence in the data after the previous two big misses. “We feel that the tighter balances will show up in next week’s number as well, though with this week being a low demand week, we could still see another triple-digit build.”

By region, the Midwest reported a 33 Bcf injection into inventories, while the East added 26 Bcf, according to the EIA. Stocks in the Mountain region grew by a larger-than-expected 10 Bcf, and stocks in the Pacific rose by 14 Bcf.

Working gas in storage as of June 7 stood at 2,088 Bcf, which is 189 Bcf higher than a year ago but still 230 Bcf below the five-year average, according to EIA.

In the near term, a gas price decline is necessary to stimulate sufficient coal-to-gas switching activity to rebalance the market, according to Raymond James. Longer term, with associated gas production remaining robust, the market needs only modest supply growth from Appalachia (and likely declines in most other gas plays) to balance.

“We expect 2019 should prove to be a positive year for natural gas demand as both exports to Mexico and outbound LNG tanker activity ramp up. On the supply side, more associated gas supply is expected,” the firm said. “However, we believe an increasing domestic gas supply and growth in renewables that are increasingly becoming more cost competitive with gas are putting further pressure on Henry Hub gas prices.”

Much of the United States has enjoyed rather mild weather during the June 6-12 period, but the West Coast has been scorched by record temperatures. The recent heat wave sent temperatures soaring up to 30 degrees above average into the 90s and over 100 in some coastal areas from California to Washington, shattering record highs, according to AccuWeather.

The strong demand lifted power generation throughout the Western Electricity Coordinating Council area by 1,023 GWh from Tuesday to Wednesday, with gas leading the way among the different fuels in the stack, according to Genscape Inc. Meanwhile, total demand on the Pacific Gas & Electric Co. (PG&E) system crested the 2 Bcf/d mark for the first time this summer as temperatures in the San Francisco Bay Area topped 100 degrees, setting new record highs.

Power supply had been temporarily cut to thousands of PG&E customers as a precautionary measure against wildfires, but it did not make a dent in overall demand. “Power prices reportedly topped the $1,000/MWh mark and noncore electric demand for gas hit 876 MMcf/d, a mark not reached last summer until mid-July,” Genscape senior natural gas analyst Rick Margolin said.

Farther south, aggregate demand in the Southern California region (Southern California Gas plus El Paso Natural Gas and Kern River Pipeline/Mojave Pipeline) had climbed to a summer-to-date high of 3.6 Bcf/d, also a mark not reached last summer until July, according to Genscape.

Traders, however, appeared to disregard the current heatwave, sending forward prices in Southern California lower across the curve as outlooks show a more seasonal weather pattern returning to the region beginning this weekend.

“A more typical weather pattern that favors a persistent sea or bay breeze with areas of morning low clouds is in store along the coast,” according to AccuWeather senior meteorologist Brett Anderson.

The pattern, known to locals as “June gloom” is expected to ramp up and spread northward into this weekend, the forecaster said. Temperatures are forecast to hover within a few degrees of average along much of the California coast into this weekend.

“Farther north, temperatures will throttle back to between 5 and 10 degrees above average along much of the Oregon and Washington coasts on Friday and during this weekend,” Anderson said.

Given the much milder outlook, SoCal Citygate July fell 11 cents to $5.403, while August slid a penny to $5.594 and the balance of summer (July-October) dropped a nickel to $4.73, according to Forward Look.