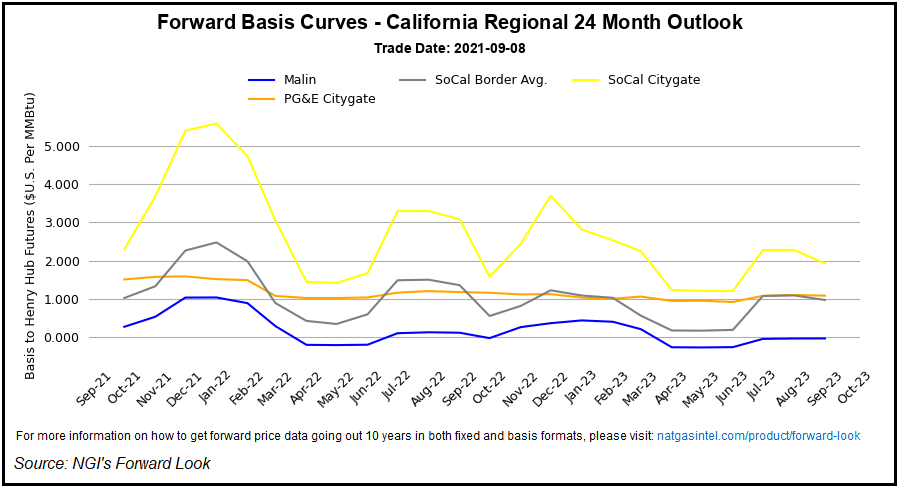 October fixed prices rallied by an average of 26.0 cents, while prices for the November and winter (November 2021-March 2022) strips each rose by an average 30.0 cents, according to NGI’s Forward Look.

In a midday update Thursday, the Bureau of Safety and Environmental Enforcement said about 77% of the natural gas and 76% of the oil produced in the Gulf of Mexico remained offline after Ida crashed ashore near Port Fourchon, LA, Aug. 29 as a Category 4 storm.

Crews were still evacuated from 71 production platforms, or around 13% of the manned infrastructure that remains in the same location throughout a project’s duration. Four moored rigs also remained unmanned, equivalent to around 36%. In addition, two dynamically positioned rigs, which are unmoored, had not returned to their drilling locations.

Meanwhile, Entergy Corp. said it had restored power to nearly 80%, or 728,000 of the 948,000 total customers that lost power after the storm. Most of the affected transmission lines also had been returned to service. Full power restoration, however, was expected to take a few more weeks.

Though more than 1,000 miles away, West Coast markets had their share of volatility this week thanks to tight supplies and continued heat. The hot weather prompted calls for power conservation and resulted in an energy storage facility being forced offline after batteries overheated and were damaged.

Steeper increases were seen further out the forward curve amid the dire storage picture that’s been exacerbated by the ongoing drought and impact on hydroelectric generation. SoCal Citygate November fixed prices shot up 94.0 cents during the period to reach $8.646, while the winter strip picked up 92.0 cents to average $9.43. Gains moderated a bit for next summer (April-October), which climbed 34.0 cents to $5.960.

What are not yet moderating are the sweltering conditions in the region.

The National Weather Service said Thursday the excessive heat would continue over portions of the Mojave Desert and parts of the interior valleys of California. An upper-level trough was forecast to slide into the Pacific Northwest on Friday, ushering in more comfortable air and an increasing chance of thunderstorms. The milder conditions were then expected to spread to the Rockies.

For a bit longer though, temperatures were forecast to remain in the low 90s in Southern California before falling to the upper 80s sometime next week. This should keep demand strong in the region, especially with hydroelectric power hampered by the drought and the need for increased power imports, which often are from gas generators.

Meanwhile, the relentless heat took its toll on energy infrastructure in the region. Earlier this week, Vistra Corp. the overheating issue at the Moss Landing, CA, facility developed late Saturday at phase 1, which produces 300 MW and is the larger of two phases on site.

Moss Landing Phase 1, which stores excess energy during the day and releases it at night to meet evening demand, remained out of commission Thursday as Vistra worked to assess the cause of the problem. The facility can power 225,000 homes at peak capacity. The second phase, which produces 100 MW, remained operational.

Crews “are in the early stages of this investigation and expect that it will take some time to fully assess the extent of the damage before developing a plan to safely repair and return the battery system to operation,” Vistra officials said.

Meanwhile, restrictions continued on El Paso Natural Gas Pipeline after an explosion in August on a segment of Line 2000. Wood Mackenzie noted that before the explosion, receipts at Southern California Ehrenberg were around 867 MMcf/d and dropped by as much as 432 MMcf/d after the incident. However, flows at Ehrenberg have consistently hovered at around 542 MMcf/d since the Line 2000 force majeure, actualizing cuts closer to about 325 MMcf/d.

The combination of hot weather, strong demand and supply restrictions led Southern California Gas to withdraw 120 MMcf of gas from the Aliso Canyon storage facility, a rare move only allowed under certain circumstances. The withdrawal began Tuesday night into early Wednesday morning as conditions posed “an imminent and identifiable risk of gas curtailments created by an emergency condition.” The last time that Aliso Canyon withdrawals had been justified under this condition was in March, according to Wood Mackenzie.

The tight backdrop boosted cash prices in the region as well. SoCal Citygate spot gas prices hit an intraday high of $27.00 on Wednesday.

Extreme price swings in the West notwithstanding, all eyes were fixated on Henry Hub this week. With GOM production returning at a much slower pace than initially anticipated, the looming threat of a supply shortage this winter caused quite the stir among traders.

EBW Analytics Group said $5.00 represented a key psychological threshold level for natural gas, but on a seasonal basis, the recent price gains were fully justified. The firm’s analysts said the storage deficit versus the five-year average could spike by 88 Bcf over the next three weekly inventory reports, suggesting a market that is 4.2 Bcf/d tighter than average.

“The sluggish return of more than 1.72 Bcf/d of shut-in Gulf of Mexico production,” remains a key component of this shortfall, according to EBW. Still, the combination of a pre-existing storage deficit of close to 250 Bcf, clear evidence of continuing market undersupply and the exhaustion of gas-to-coal switching all point to continued fundamental upside.

“Technical analysis suggests that $5.11-5.13 could be a key resistance point,” the EBW team said.

As for the latest storage data, the government storage figure provided some insight into Ida’s impact on balances. Ahead of the Energy Information Administration’s (EIA) storage report, analysts had pegged stocks to rise by around 40 Bcf, give or take a few Bcf.

NGI estimated a 38 Bcf injection into U.S. gas stocks. A Bloomberg poll landed at a median of 39 Bcf, with predictions ranging from 32 Bcf to 58 Bcf. Results of a Reuters survey, meanwhile, ranged from injections of 32 Bcf to 51 Bcf, with a median build of 40 Bcf.

The actual EIA easily breezed by consensus, coming in at a plump 52 Bcf. However, traders brushed off the data as the injection did little to assuage concerns about supply this winter.

Elsewhere, Midwest inventories rose by 30 Bcf, and the East picked up 25 Bcf. Mountain stocks increased by 1 Bcf, while Pacific stocks were steady on the week.

The aggressive price response in recent days was a stark reminder that the supply fears that have dogged the U.S. gas market intermittently this summer are still present, and possibly heightened. That’s for good reason, according to RBN Energy LLC analyst Sheetal Nasta. While storage deficits have been growing each month, the difference now is that there are less than 60 days left of the official injection season.

“Each day that production is offline between now and November represents lost time and volumes for replenishing stocks before winter heating demand arrives.”

Though gas prices may pull back in the weeks ahead as more mild fall weather spreads across the country and GOM production recovers, there are growing voices in the market that Henry Hub may need to move even higher as the winter season begins. Mobius Risk Group said there is a potential for Henry Hub to price high enough to keep liquefied natural gas (LNG) export-bound gas at home. That may be a tall order, however.

“Downstream markets in both Asia and Europe continue to strengthen, and not just at the very front of the curve,” Mobius analysts said.

The Japan Korea Marker forward curve does not dip below $10.00 until April 2023, according to the analysts. The same threshold also is not crossed along the Title Transfer Facility curve until April 2023.

“It is reasonable to conclude that the Asian and European markets are battling it out for LNG cargoes,” Mobius analysts said. “Concurrently, there may be opportunistic exporters finding the ability to lock-in exceedingly wide arbs.”

LNG feed gas volumes continued to fluctuate not far below record highs, near 11 Bcf. Meanwhile, two liquefaction plants are set to start up in the coming months, boosting capacity and therefore, feed gas, by another couple notches.

This growth means it would likely take a combination of higher supply and a milder winter to whittle down the storage deficit or keep it from expanding further, according to Nasta. At this late stage in the injection season and with heating demand around the corner, $5.00 pricing may be the tip of the iceberg.

“The recent price spikes highlight the potential for high — even double-digit — prices at times this winter, given the right combination of extreme weather and production freeze-offs,” Nasta said.