Natural gas forward curves blew up for a fourth consecutive week during the trading period from Sept. 9-15 as lingering production outages continued to perpetuate supply concerns ahead of the peak winter season. October forward prices rallied by an average 47.0 cents, and November shot up 54.0 cents on average, according to NGI’s Forward Look. 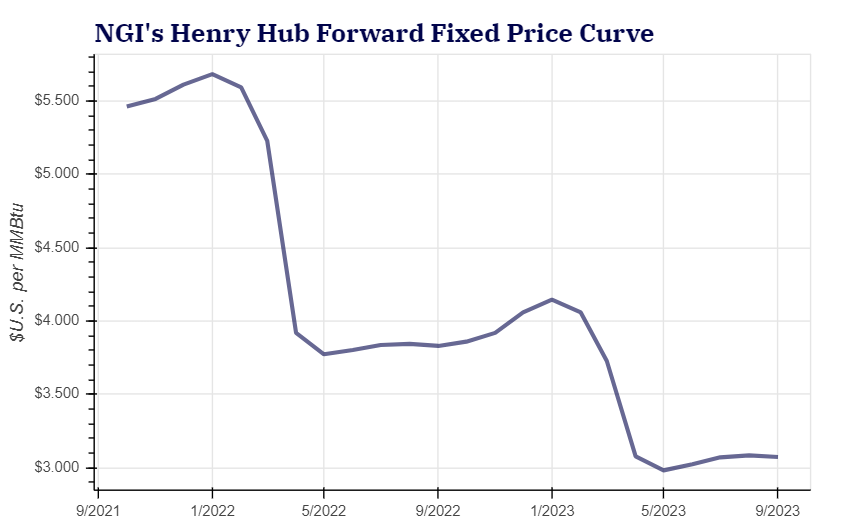 Gains were even more stout further out the curve as the potential for record liquefied natural gas (LNG) exports and a concurrent hike in domestic gas consumption in the winter sparked fears of a supply shortage. The winter strip (November-March) averaged 61.0 cents higher for the trading period ending Sept. 15, while the summer 2022 strip (April-October) picked up only 8.0 cents on average.

However, a somewhat bearish storage stat, coupled with a much cooler autumn outlook, have reduced fears of a storage crunch this winter, sending prices lower at the end of the Sept. 13-17 period.

The Energy Information Administration (EIA) on Thursday said inventories for the week ending Sept. 10 rose by 83 Bcf. That was at the high end of estimates but a few Bcf shy of last year’s 86 Bcf build for the similar week. The five-year average injection stood at 79 Bcf.

The Schork Group called the injection “solid.” However, analysts said three-quarters of the way into the refill season, “the market has replaced only four of the seven barrels from last winter’s 2.208 Tcf delivery.”

NatGasWeather noted it was the second week in a row the storage miss was to the bearish side, suggesting the supply/demand balance wasn’t as tight as previous weeks. Whether it was the surprise storage miss, a temporary pause in the rally or some profit-taking, Nymex futures prices responded with a large move lower after the EIA report. The October contract went on to settle back at $5.335, while November dropped to $5.382.

“We expect the natural gas markets will be watching” the next EIA build closely “for signs implied loosening in the supply/demand balance the past two weeks is real,” NatGasWeather said. Most early estimates were focused around a build in the 67-82 Bcf range, which is near the five-year average of a 74 Bcf injection.

“The following two builds could print a little larger than normal, with the potential the builds three and four out exceed 90-plus Bcf,” NatGasWeather said. “This would nearly ensure end-of-injection supplies reach near or over 3.5 Tcf, barring an unseasonably cold October or early November.”

Broken down by region, the Midwest added 34 Bcf into storage and the East added 29 Bcf, according to EIA. South Central stocks rose by 22 Bcf, including a 13 Bcf build in nonsalt facilities and a 9 Bcf build in salts. Mountain inventories increased by 2 Bcf.

The Schork team noted that since the beginning of the traditional injection season, a net 94 Bcf of gas had been withdrawn from salt facilities in the South Central region. “As such, utilities now have to kindly repay this gas ahead of winter.”

The Pacific continued to withdraw amid continued tightness in the region thanks to robust demand, an ongoing drought and supply constraints. The region pulled 3 Bcf out of storage.

Total working gas in storage as of Sept. 10 stood at 3,006 Bcf, which is 595 Bcf below year-ago levels and 231 Bcf below the five-year average, according to EIA.

Bespoke Weather Services said it was seeing more signs that inventories could rise above 3.5 Tcf for an end-of-season storage total. “That is not enough to end the bull story, but, in our view, is pushing things to the point where we will need to see some decent cold in order to sustain these levels.”

Weather would decide the fate of prices. “Until we see the weather, volatility likely rules,” Bespoke said.

Generally speaking, storage above 3.5 Tcf is enough to get the United States through an average winter without extreme volatility, according to Mizuho Securities USA LLC’s Robert Yawger, director of Energy Futures. The last time EIA gas storage failed to reach the 3.5 Tcf level was the winter of 2018-2019. Storage that year maxed out at 3.247 Tcf, with prices topping out at $4.929.

On the weather front, Bespoke said long-range forecasts continued to cool. The European weather model specifically has changed course significantly over the past several runs and backed off the heat initially expected.

Despite drastically lowering the cooling degree day outlook, though, the model has yet to pick up any notable heating degree days. This has resulted in a “weak overall demand picture,” a pattern Bespoke expects to continue into October.

Longer term, the firm still favored a warmer October, though the models at day 15 (Oct. 1) were rather inconclusive. “They do show some warmth, but feature some higher latitude ridging that argues against a big warm pattern.”

Bulls are obviously hoping a colder-than-normal winter comes to fruition since it could send prices skyrocketing even further, according to NatGasWeather. However, global temperatures have been quite warm most of the past 10 years, suggesting warmer risks to winter temperatures.

“Regardless, trading should be wild as we advance into October and November in anticipation of what Northern Hemisphere weather patterns will show for December,” the forecaster said.

After struggling to reach $3.00 at the beginning of summer, robust structural demand unrelated to the weather has provided ammunition for bulls looking to pounce throughout the summer. Strong export and industrial demand have supported the rally, while the supply side suffered a crushing blow from Hurricane Ida.

The storm, which stormed into Louisiana Aug. 29, wiped out nearly all Gulf of Mexico (GOM) gas production. A meaningful recovery has begun to take place. However, as of midday Friday, the Bureau of Safety and Environmental Enforcement said about 34%, or 765.5 MMcf/d, of the gas produced in the GOM remained offline.

Meanwhile, power restoration efforts have made significant progress. Entergy Corp. indicated Friday that 95% of its Louisiana customers that lost power during Ida had been restored. All affected Mississippi power customers also had returned to service.

Even before Ida crashed ashore in Port Fourchon, LA, last month, production left much to be desired. Exploration and production companies have continued to maintain financial discipline, strengthening their balance sheets, paying down debt and returning money to shareholders. Restraining output has left supply more or less stagnant over much of the past year, falling short of demand growth.

Meanwhile, LNG demand has remained rampant throughout the summer amid strong demand, supply constraints and the need to replenish storage in Europe and Asia. The tight backdrop has led to record pricing on both continents, which has kept U.S. prices well supported even when domestic demand has ebbed.

However, if the winter weather is colder than normal in the Lower 48, analysts are beginning to question whether gas prices may rise enough to stall exports and keep the gas for U.S. consumers.

EBW Analytics Group said global LNG pricing may represent a higher ceiling, but it brings several challenges. First, the time lag between exporting an LNG cargo from the United States and arriving at its final destination is at least a one-month period. The price signal, therefore, has to happen with sufficient lead time to shut-in a cargo.

“Even then, there are significant concerns if offtakers who signed contracts for the right to guaranteed supplies in high-priced situations — and likely facing very tight supplies domestically in both Europe and Asia — are willing to relinquish valuable cargoes,” EBW analysts said.

In addition, as with ethane and fuel oil pricing, global LNG prices may be dynamic and change rapidly, according to EBW. Rising LNG prices could boost the ultimate ceiling for Nymex natural gas, but a warm winter in Europe or Asia could lead to a sharp downturn.

Though likely temporary, a significant downturn for Nymex futures materialized on Thursday following the bearish storage report. The October contract settled at $5.335, off 12.5 cents from Wednesday’s close.

The rate at which shut-in GOM natural gas production returns, the timing of the ramp-up for both Sabine Pass 6 and Calcasieu Pass LNG facilities, and early winter weather all would prove critical, according to EBW. Furthermore, the Illinois bill to save 4 GW of nuclear capacity from early retirement likely reduced winterlong natural gas supply by about 100 Bcf.

For now, mild weather is set to continue across the northern tier, while cities from California to West Texas bake. Daytime temperatures were expected to remain firmly in the 90s and 100s as high pressure rules over the region.

For California and much of the West Coast, the forecast is a continuation of the oppressive heat that’s plagued the region this summer. On top of the scorching heat, drought conditions have impacted supply, with one hydroelectric power generator forced offline. That has led to increased power imports that have often been gas-fired generation.