Shoulder season may be setting in across U.S. natural gas forward markets weeks ahead of schedule, with modest price changes seen across the country, according to NGI’s Forward Look. 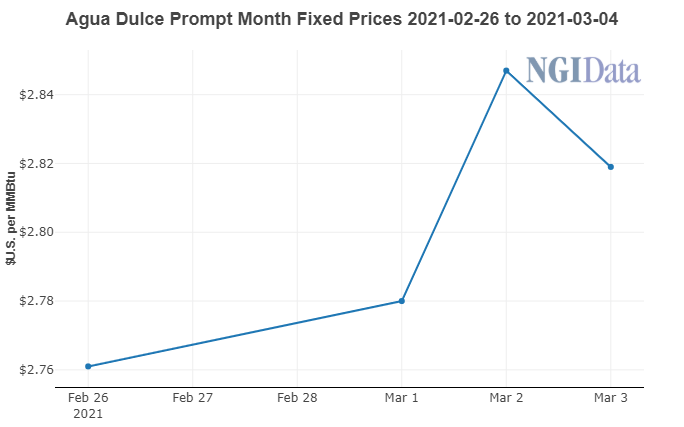 A similar increase was seen for May forwards, while the summer (April-October) strip and next winter (November-March) posted smaller gains, Forward Look data showed.

Rather than winter weather providing any momentum for forward prices this week, the latest weather data showed only a brief bout of cold over the next couple of weeks, with models favoring chilly air over the West then moving eastward March 14-17.

However, before and after the projected cold snap, conditions are expected to be fairly mild, and NatGasWeather noted that the weather data has been inconsistent with how the pattern may play out. “We expect it will continue to bounce between colder and warmer trends for several more days before finally locking it in. But for now, March 14-17 is just cold enough to be considered neutral or near normal.”

Rather than banking too much on the weather, traders may have relied on technical support to spur the rebound, according to EBW Analytics Group. However, further price gains may prove difficult to come by, barring a more substantial bullish forecast shift.

The EBW analysts said the market surprisingly shrugged off the recent 338 Bcf storage withdrawal, which was the second largest on record. The withdrawal finally flipped the storage surplus to the five-year average to a deficit. The Energy Information Administration (EIA) followed up the massive draw with another stunner this week.

The EIA on Thursday reported a shockingly low 98 Bcf withdrawal from storage inventories for the week ending Feb. 26. Participants on The Desk’s online energy chat Enelyst questioned the validity of the data, especially in the South Central region. The EIA reported no net change in stocks for the period, with the 9 Bcf build in salt facilities being negated by the 9 Bcf draw in nonsalts. Some estimates had pointed to a draw in the high 20s Bcf.

“There was a good patch of warmth in the south,” said Huntsville Utilities natural gas supply manager Donnie Sharp. “We injected more out of necessity due to the weather than any desire to be injecting. Maybe this was more widespread in the South Central due to weather and making up some of the withdrawals from the week before.”

Some market observers also noted that refineries along the Gulf Coast have experienced a much slower return following the Arctic blast, while others said ethane rejection in the Permian Basin may have boosted production in the region.

Elsewhere across the country, the Midwest withdrew 43 Bcf out of storage, and the East took out 41 Bcf, according to EIA. Both the Mountain and Pacific regions pulled out less than 10 Bcf.

Total working gas in storage fell to 1,845 Bcf, which is 277 Bcf lower than year-ago levels and 178 Bcf below the five-year average.

Ahead of the EIA report, estimates were pointing to a much steeper withdrawal near 135 Bcf, which would have pushed the deficit to the five-year average to around 220 Bcf.

Bespoke Weather Services, which had pegged the draw at 138 Bcf, said the actual EIA figure implies super weak supply/demand balances, thus being very bearish, but it too questioned the validity of the data.

“We do not believe in this number,” Bespoke chief analyst Brian Lovern said. “The data simply does not add up to give such a weak draw, and we view it as highly unlikely that this number’s implied balance will be reflected moving forward. It could be an implicit revision, but is hard to justify with the data we have.”

Projecting EIA storage figures has ever been easy, but this week’s surprising draw made estimating the next number even more difficult, especially since weather-driven demand is expected to plummet. Weather forecaster DTN’s 15-day outlook showed 45 gas-heating degree days of below-normal heating demand. EBW analysts said the increased weather sensitivity of demand since the onset of the pandemic may heighten demand declines.

“Individuals working from home exercise more discretion over the thermostat than at the office, and demand has exhibited amplified seasonality since last spring,” said the EBW team. “While the economy prepares to return towards normal, residual pandemic effects may lead to a larger-than-expected decline in demand into early spring.”

Another headwind facing the market is production, which has returned much quicker than expected following the deep freeze. Just a week after production bottomed out at around 70 Bcf/d on Feb. 17, output rebounded quickly and current production estimates are back around 90 Bcf/d, according to Wood Mackenzie.

However, the rapid recovery in gas production should not be mistaken for significant growth this year. Producers from Appalachia to the Permian have pledged to maintain their focus on shareholder returns and improving the balance sheet despite the rise in commodity prices from 2020 lows.

With only modest production growth expected this year, the background state of the market remained supportive. Liquefied natural gas (LNG) demand has come roaring back from winter storm lows, cresting the 11 Bcf mark on Thursday for the first time since the February freeze.

During the unprecedented cold blast, feed gas volumes to U.S. LNG export facilities had plunged below 2 Bcf amid a Hail Mary pass by the Texas governor to help restore generation, and ultimately bring power back to the millions that had been cold and in the dark for days.

Buyers that source their natural gas for liquefaction under Freeport’s tolling model were able to sell gas into markets in the South at steep premiums, according to Smith, as natural gas was selling for hundreds of dollars in Texas and at one point more than $1,000/MMBtu in Oklahoma.

Even if the Texas energy crisis is in the rearview mirror and there is a structurally more supportive backdrop, EBW analysts said it is possible the market may not internalize the bullish fundamental outlook until late spring. Over the next six weeks, the EBW team expects bearish seasonal catalysts — including heightened seasonal demand declines, post-winter production rebound, maintenance hampering both LNG and pipeline exports to Mexico — to counteract the long-term bullish fundamental picture.

“By late spring, however, the tides may begin to turn as these factors shift bullish and local distribution company planned injections begin in earnest, leading to meager injections that catalyze the market into bidding prices higher,” EBW said.

In their first week as part of NGI’s Forward Look, the three new pricing locations behaved fairly similarly to other U.S. markets.

The forward curves at Agua Dulce and Transco Zone 2, in particular, followed the trajectory of Nymex futures, where April gained about 5.0 cents and smaller increases were seen further out the strip.

Agua Dulce was added to Forward Look to provide clarity into the pricing at the Texas/Mexico border. Agua Dulce is the last stop in South Texas before the border for natural gas moving into Mexico via pipelines like Sur de Texas-Tuxpan.

“There’s already been an increase in liquidity at the South Texas hub in NGI’s Daily Gas Price Index, and volumes are expected to continue increasing as the third production unit at Corpus Christi ramps up,” said NGI’s Patrick Rau, director of Strategy & Research.

Wood Mackenzie noted on Thursday that Mexico was hit by similar outages and gas supply issues amid the historic cold snap last month, but exports to Mexico are back to normal levels. The firm said exports south of the border broke through the 6 Bcf/d mark on Tuesday.

Mexico President Andrés Manuel López Obrador this week hailed the Mexican Senate’s passage of a controversial law governing the electric power sector that would give priority in the dispatch order to power generation assets owned by state utility Comisión Federal de Electricidad (CFE). “This will allow us to strengthen” CFE, the president said, and “face difficult moments like what occurred in Texas, which had a repercussion in our country.”

Transwestern, which expanded Permian coverage, posted some slightly more pronounced increases at the front of the curve. April prices climbed 9.0 cents from Feb. 26-March 3 to reach $2.539, while May rose 7.0 cents to $2.557, according to Forward Look.