Shoulder-season doldrums took hold of natural gas forward curves for the trading period ending May 5 as mild weather stole some of the momentum away from strong export demand. June forward prices averaged exactly flat for the period amid a mix of small gains and losses, while the balance of summer (June-October) eked out a modest 1.0-cent increase, according to NGI’s Forward Look. 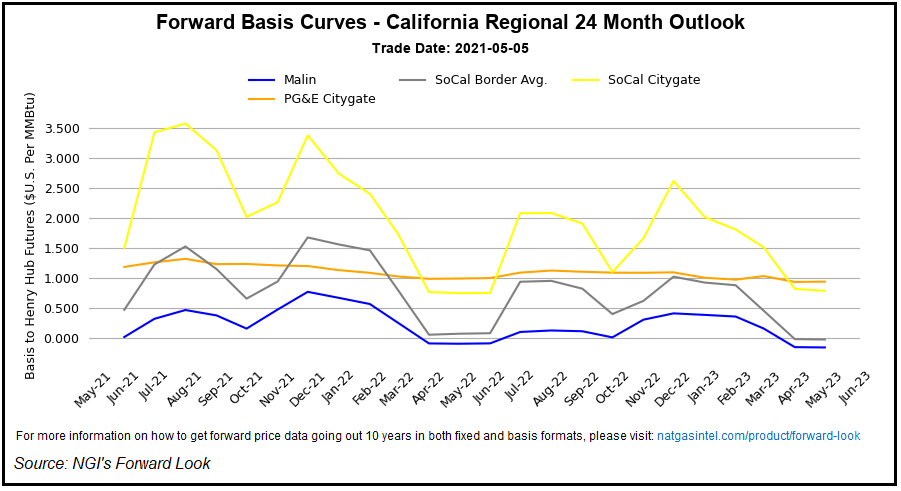 Slightly stronger gains were seen for the upcoming winter (November-March) and summer 2022 (April-October) strips, fueled by a storage deficit that’s set to expand in the coming months.

The minor price changes along the forward curve nearly mirrored the range-bound trading that took place along the Nymex futures strip. The June contract shifted less than a nickel throughout the period, ultimately settling Wednesday at $2.938. Winter prices, meanwhile, averaged around $3.14 after climbing a couple of cents.

EBW Analytics Group said with fundamental support and technical resistance — and the likely need for a pause to consolidate gains after the strong move higher in recent weeks — range-bound trading appears the most-likely short-term scenario for natural gas.

The firm noted that weather had turned “bullish” for the first two weeks of May, with early-month heating demand surging 38 gas-heating degree days over the past week. The medium- to long-term fundamental outlook also remained robust, and strong late-summer and winter contracts are likely to help support the June contract.

Before long, though, heat is set to begin building, threatening to throttle back on storage injections as gas is needed instead for cooling.

Forecasters are projecting another potentially record-setting summer, with AccuWeather the latest forecaster to join the chorus calling for a hot summer, particularly in the western half of the country.

On Thursday, the Electric Reliability Council of Texas said it was planning for power consumption to reach a record this summer. The grid operator expects demand to hit a peak of 77,144 MW. The current system-wide peak demand record in the region is 74,820 MW, which was set on Aug. 12, 2019.

On a related note, Mobius Risk Group pointed out that for the fifth straight week, the Edison Electric Institute reported a sizable year/year increase in total power load. This, according to Mobius, overwhelms the impact of renewable generation growth, at least in terms of the absolute call on natural gas to serve overall U.S. load.

“Power consumption of natural gas for the week ending April 29 was up a little over 2 Bcf/d versus the comparable week last year, and this occurred during a week which saw 11 GWh more wind (2 Bcf/d gas equivalent), and almost exactly the same number of total degree days,” Mobius said.

Meanwhile, late-season cold weather in Asia and Europe has limited storage refills so far in the injection season, and more U.S. imports of liquefied natural gas (LNG) are seen being needed to replenish stocks. In addition, industrial demand in China is booming as the economy continues to recover from Covid-19.

In Europe, TPH analysts noted that inventories during the week rose by 24 Bcf, compared with seasonal norms of 79 Bcf. This pushed current storage to 1.2 Tcf, which is a 27% deficit to the five-year average.

“Demand remains robust with the largest markets, Germany and the UK, tracking above our expectations by around 1.5 Bcf/d and 0.6 Bcfd, respectively,” TPH analysts said.

On the supply side, Norwegian and African flows have remained strong at 10.9 Bcf/d and 4.1 Bcf/d respectively, well above seasonal norms, according to the TPH team. However, even with the incremental flows, the market has remained firmly undersupplied relative to norms.

“Combined with Russia playing hardball with Europe and remaining on the sidelines with incremental flows until Nord Stream 2 is online, we struggle to see how European inventories fill,” TPH said. “The gas pricing picture continues to improve.”

The supportive backdrop led BloombergNEF to raise its price forecast for Japan Korea Marker (JKM) to $7.40-8.80 for the April-October period. The firm’s previous forecast was for JKM prices to range between $6.90 and $7.90 for the summer.

Likewise, Citi Research was reported by Bloomberg to have raised its price forecast for JKM prices to $9.60 in 2Q2021, to $10.20 in 3Q2021 and to $11.90 in the final three months of the year. Those targets are about $2 higher than the investment bank’s prior forecasts.

At the same time, exports via pipeline to Mexico hit a new high in April and while cross-border flows have tempered in recent weeks, the baseline still seems to have shifted upward thanks in part to some “stickiness” in delivery to power plants, according to Energy Aspects.

“If peak cooling season flows in the July-August period lean toward 7 Bcf/d versus our forecast, our end-October storage estimate, which already is at 3.45 Tcf, would fall to 3.40 Tcf,” Energy Aspects said.

The 60 Bcf build was not only below expectations but also well below the 103 Bcf year-ago build and the 81 Bcf five-year average.

By region, the South Central build of 20 Bcf led all others and included a 14 Bcf injection into nonsalt facilities and an increase of 6 Bcf into salts. The Midwest and East regions followed closely with builds of 15 Bcf and 13 Bcf, respectively. Pacific inventories grew by 7 Bcf, while Mountain region stocks increased by 5 Bcf.

Inventories as of April 30 stood 345 Bcf below year-ago levels and 61 Bcf below the five-year average, according to EIA.

“With two major markets continuing to distance themselves from the five-year average, we continue to remain optimistic on gas pricing heading into summer,” TPH said.

Notwithstanding the potential for a string of large storage injections this month, EBW analysts said hints of the coming shortfall may become increasingly apparent by June, particularly if amplified seasonality of demand plays a large role. However, most of the upward pressure on NYMEX futures is unlikely until the latter half of the injection season.

The June Nymex futures contract continued to trade range bound during the rest of the week. It settled Friday at $2.958, up 3.0 cents from Thursday’s close.

California forward markets made some waves during the otherwise sleepy trading week.

That’s because after a several-day span of above-average temperatures, a wet weather system began moving into the northern part of the state on Thursday, setting the state for a dramatic plunge in temperatures.

AccuWeather said much colder air is forecast to advance eastward in the wake of the front, though the chilliest weather would be confined to Northern California. Highs were seen struggling to reach the 60s for the next few days, while more seasonal temperatures in the 70s were in store for Southern California.

The cooler weather led to a slightly stronger pullback in prompt-month pricing for California locations compared with contracts further out the forward curve.