Natural gas forward prices continued to tread water during the May 28-June 3 period, rising only a few pennies on average across the curve as summer heat started to build across the United States. 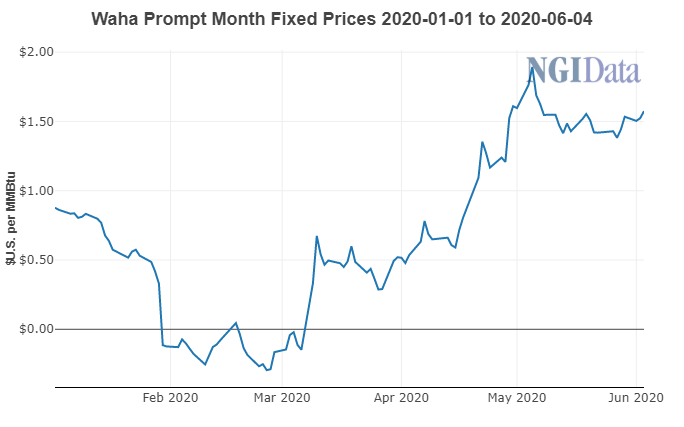 Scorching temperatures in California and the Desert Southwest led to larger gains in those regions and ultimately helped lift July prices by an average 3.0 cents, while the rest of the curve was up about 2.0 cents on average through the summer 2021 strip, NGI’s Forward Look data show.

By comparison, Nymex futures moved about a penny lower for July and through the balance of summer (July-October), while prices for the upcoming winter (November-March) tacked on 3.0 cents over the six-day period.

With the July Nymex contract sitting Wednesday at around $1.82/MMBtu, prompt-month futures remained stuck in their recent range from $1.60-1.90, a trend seen continuing until more meaningful changes occur in the supply/demand equation.

Weather has been a key component of support for gas prices over the past week as heat has started to build in areas outside of the West. While early season heat is to be expected in Texas, the South and Southeast, areas farther east also have seen warmer weather. NatGasWeather said northern U.S. cities are forecast to see “plenty of mid-80s” and locally 90s in Washington, DC, for the next few days, which should keep power burns to a “formidable” 35-plus Bcf.

However, long-range weather models are seeing more cooling in the eastern states in the 11- to 15-day outlook in response to what is expected to be a transient upper-level trough passing through in the pattern, according to Bespoke Weather Services. The firm noted that models are not conclusive on what happens beyond that period, but it suspects that above-normal temperatures may try to spread back eastward given declining angular momentum that signifies a more La Niña-like base state.

Also keeping what appears to be a hard floor under prices is production, which is down about 10 Bcf from late-November highs at around 86 Bcf/d. However, there are signs emerging that Lower 48 output will start climbing next month, which would add to bearish pressure coming from the liquefied natural gas (LNG) sector.

Appalachian natural gas giant EQT Corp. said its 1 Bcf/d curtailment in Ohio and Pennsylvania may extend through June, but a recovery in West Texas Intermediate crude prices to the mid- and upper $30s/bbl range is already leading to increased activity by other producers. Analysts see oil production bottoming out in June before embarking on a slow recovery. With breakeven costs in the Permian Basin becoming economic for some producers at current WTI price levels, any increase in activity would ultimately result in an increase in associated gas volumes.

“I have no magic eight ball, but I have natural gas production climbing from here to 89 Bcf/d by the end of summer,” said The Desk’s Het Shah, managing director of the online energy platform Enelyst.

Meanwhile, LNG demand, which has been a boon for the gas market over the past four years, has been stopped dead in its tracks thanks to Covid-19. The coronavirus brought economies around the world to a standstill, exacerbating a global supply glut resulting from capacity brought online and a mild winter that kept storage inventories well above historical levels. In fact, low international gas prices appear to keep U.S. LNG exports out of the money through the summer and into early fall.

“It is possible that LNG exports will struggle to remain north of 3.0 Bcf/d by July or August as European storage approaches capacity and South America, a demand sink during summer 2019 due to the southern hemisphere’s winter, is ravaged by Covid-19,” said EBW Analytics Group.

Remaining LNG supply will be fighting over market share in Asia, according to the firm. Qatari LNG cargoes initially intended for Europe may be redirected to Asia, and low Australian shipping costs may be difficult to dislodge, it said. Furthermore, Tokyo coronavirus cases have spiked in recent days, and China may cut back on U.S. agricultural imports amid rising tensions — “and energy imports in a market awash in supply may be next,” said EBW.

Feed gas flows to U.S. terminals are already reflecting the lower appetite for the super-chilled fuel. NGI data showed that feed gas volumes dropped to only 3.88 Bcf on Tuesday, off from highs above 9 Bcf this spring. Though deliveries have since bounced back to more than 5 Bcf, significant downside risk looms given that significant cancellations are expected through at least October.

That doesn’t bode well for domestic inventories. The mild winter in the Lower 48 failed to meaningfully draw down stocks, and summer demand is only now starting to pick up steam.

On Thursday, the Energy Information Administration (EIA) reported that inventories rose by 102 Bcf during the week ending May 29. Although the injection was lighter than expected, the surplus contracted by only 16 Bcf over year-ago levels and by 1 Bcf over the five-year average.

Market observers on Enelyst agreed that while the EIA figure was a step in the right direction, more tightening was needed to avoid a complete filling of storage in October.

“Seeing 3 Tcf in June is not exactly what we need in my opinion to have this sentiment changing,” said NatGasWeather analyst Andrea Paltrinieri. “There’s a lot of work to do, especially if we don’t have a pretty hot summer.”

Broken down by region, the East reported a 32 Bcf increase in inventories, while the Midwest added 28 Bcf, according to EIA. In the South Central region, stocks grew by 26 Bcf, including a 21 Bcf build in nonsalt facilities and a 5 Bcf build in salts. Both the Mountain and Pacific regions boosted inventories by less than 10 Bcf.

Despite the generally bullish figure, July Nymex futures were unswayed, with prices settling nearly unchanged from Wednesday’s close at $1.822. Day/day changes of less than a penny were seen through March.

“Short-term pricing does not show a lot of enthusiasm. It may take a little more time to see those Bollinger bands tested,” Huntsville Utilities natural gas scheduler Donnie Sharp said on Enelyst.

Amid a backdrop of weak gas pricing across most of the country, Permian markets have been a bright spot in the Lower 48. That’s largely because of the declines in associated gas production that have resulted from the pullback in oil activity.

Prompt-month forward prices moved back above $1 seven weeks ago, and have remained at that level ever since. Waha’s July contract sat Wednesday at $1.574 after gaining 13.0 cents from May 28-June 3, Forward Look data show. Prices through the balance of summer and next winter also rose by the double digits, with the July-October strip moving to $1.590 and the winter 2020-21 strip reaching $2.37.

However, many Permian producers should be able to cover their variable production costs at a WTI price of around $30, and with prices appearing to hold at this level, NGI’s Patrick Rau, director of Strategy & Research, said he expects to see a fair amount of curtailed and shut-in Permian production come with it.

“Since the Permian is the fastest growing crude basin in the Lower 48, it is the main contributor to associated gas production growth. Increased Permian crude production is bad for gas prices, everything else being equal.”